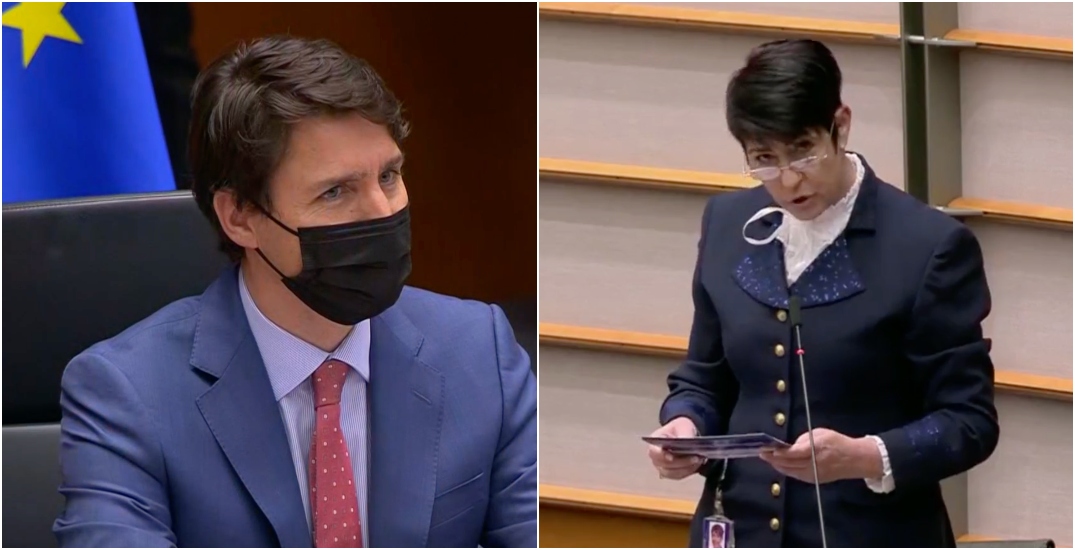 Prime Minister Justin Trudeau got an earful from a German Member of EU Parliament on Wednesday.

After speaking with European parliamentarians during his two-day official visit to Brussels, the floor was given to German MP Christine Anderson who called out the Canadian prime minister, saying he should not be able to speak in European Parliament.

Anderson says she took the opportunity to give Trudeau an “appropriate welcome,” calling it “short, concise” and “hitting the bull’s eye.”

“Based on article 195, I would like to point out that it would have been appropriate for Mr. Trudeau, Prime Minister of Canada, to address this house, according to article 144,” she began. “An article, which was specifically designed to debate the violations of human rights, democracy, and the rule of law which is clearly the case with Mr. Trudreau.”

🇨🇦🇬🇧|Yesterday, Canada’s Prime Minister @JustinTrudeau visited the #EU Parliament to give a speech. I took the opportunity to give him an appropriate “welcome” there. Short, concise and right hitting the bull’s eye! #ID pic.twitter.com/qpcQyGTixQ

Anderson accused Trudeau of openly admiring the Chinese basic dictatorship and called out the prime minister for trampling on “fundamental rights by persecuting and criminalizing his own citizens as terrorists just because they dare to stand up to his perverted concept of democracy.”

She ended her speech by telling Trudeau he is a “disgrace for any democracy. Please spare us your presence.”

Croatian MP Mislav Kolakusic also called out Trudeau for violating the civil rights of Canadians who participated in the “Freedom Convoy” protests. During his own blistering speech to fellow EU Parliamentarians, Kolakusic told Trudeau his actions in enacting the Emergencies Act was “dictatorship of the worst kind.”

Trudeau sat and listened as Kolakusic informed the prime minister that many Europeans watched as he “trampled women with horses,” and blocked “the bank accounts of single parents.”

PM Trudeau, in recent months, under your quasi-liberal boot, Canada 🇨🇦 has become a symbol of civil rights violations. The methods we have witnessed may be liberal to you, but to many citizens around the🌎it seemed like a dictatorship of the worst kind. pic.twitter.com/FZuc6aDZ1I

In February, after three weeks of the “Freedom Convoy” protests in Ottawa, Trudeau invoked the Emergencies Act, which granted the federal government exceptional powers to deal with the protests.

Trudeau clarified that the scope of these measures would be time-limited, geographically targeted, and “reasonable and proportionate” to the threats which the act was meant to address.

After a week of using the Emergencies Act to disperse the protestors in Ottawa, Trudeau was adamant that the measures wouldn’t be used “for a minute longer” than necessary in order to stabilize the protests.

“The situation is not something anyone wanted,” said Trudeau at the time. “We didn’t want to use the Emergencies Act, it’s never something to turn to without serious consideration.”

After invoking the unprecedented act, the Canadian Civil Liberties Association (CCLA) announced plans to sue the federal government, citing that “emergency powers cannot and must not be normalized.”

During his European stay, Trudeau will also attend meetings of G7 and NATO leaders concerning the ongoing Russian invasion of Ukraine.

@dailyhiveEuropean Parliamentarian calls out PM Trudeau in a blistering speech over the handling of the trucker convoy.♬ original sound – Daily Hive