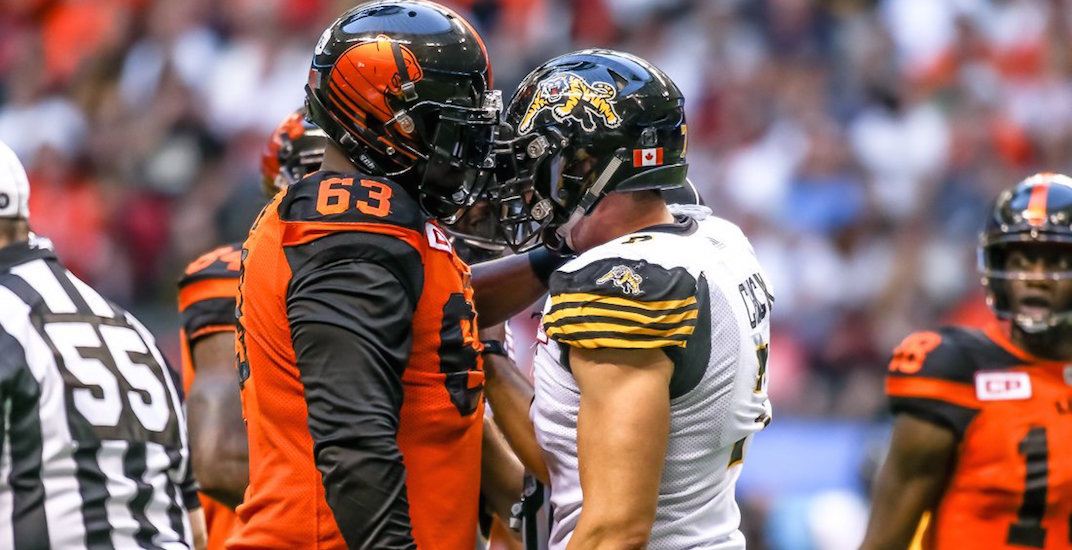 Ask anyone that rents in Vancouver and they’ll tell you, it’s not always easy to find a place to live.

That’s true for professional athletes, too.

Still haven’t found a place to stay in Vancouver someone please help me! 😩😩😩

Olafioye, who earned more than $200,000 when he was cut by the Lions after the 2016 season, returned to BC after spending last year in Montreal. So the 6-foot-6, 325-pound lineman is no stranger to the real estate market in the Lower Mainland.

Olafioye’s tweet caught the attention of a number of people, with television and radio interviews following.

“Surrey or New West,” said Olafioye of where he prefers to live in an interview with James Cybulski and Perry Solkowski on Sportsnet 650. “Somewhere as close to a SkyTrain as possible. It’s more convenient for me, so when I’m going to practice (at the team’s Surrey practice facility), my fiance can take the car with the kids. Even downtown, if that’s possible. Anything that’s available.”

A native of Detroit, Michigan, Olafioye is without his fiance and two kids – a four-year-old daughter and an eight-month-old son – until he finds a place for them.

Part of the problem is that Olafioye doesn’t live in Vancouver year-round. That means he’s looking for a six-month lease, while most landlords are searching for long-term commitments.

Hey, Metro Vancouver peeps…BC Lions OL @jolafioye63 needs to find a place to rent this season. As mentioned on @Sportsnet650, he’s a non smoker, has no pets and not exactly a party guy aside from the odd visit from the @BCLions offensive line. Help the man out! @CFL

The 30-year-old says he doesn’t have pets, isn’t a smoker, and won’t throw parties – so he profiles as an ideal tenant.

Perhaps Olafioye’s luck is about to change though, as a number of people have reached out to him about places they have for rent.

Great!!!!! Can you DM me your number please?

@BosaProperties @TELUS as sponsors of the team would you be able to help me find a rental unit that fits my needs as stated above? Thank you so much!

How much? And thank u!

I can send pictures if you like. It’s at Richards and Helmcken, three blocks to the Canada Line at Yaletown Roundhouse.

No I haven’t! How much is the unit?

@jolafioye63 there are some Facebook groups for housing that I found pretty helpful. https://t.co/qneUhFhPaZ

Still looking? My friends keep tagging me in these posts. Might have a place in Coquitlam.

Hey Jovan, still looking? I may have a solution for you. DM me for details.

@jolafioye63 Hey there sir. I saw you are looking for a place to live. I have a place that will be available in August. It's in North Delta. I am looking for a short term tenant so this could work out well. I'm not looking for season tix but a game would be cool! Let me know!

We have a two bedroom furnished suite in Coquitlam if you are still looking. Six month lease is fine.

The Lions won their season-opener at home on June 16, but are 1-1 after dropping their first game after the bye week. BC is now preparing for a home-and-home against the Winnipeg Blue Bombers, beginning on the road this Saturday.