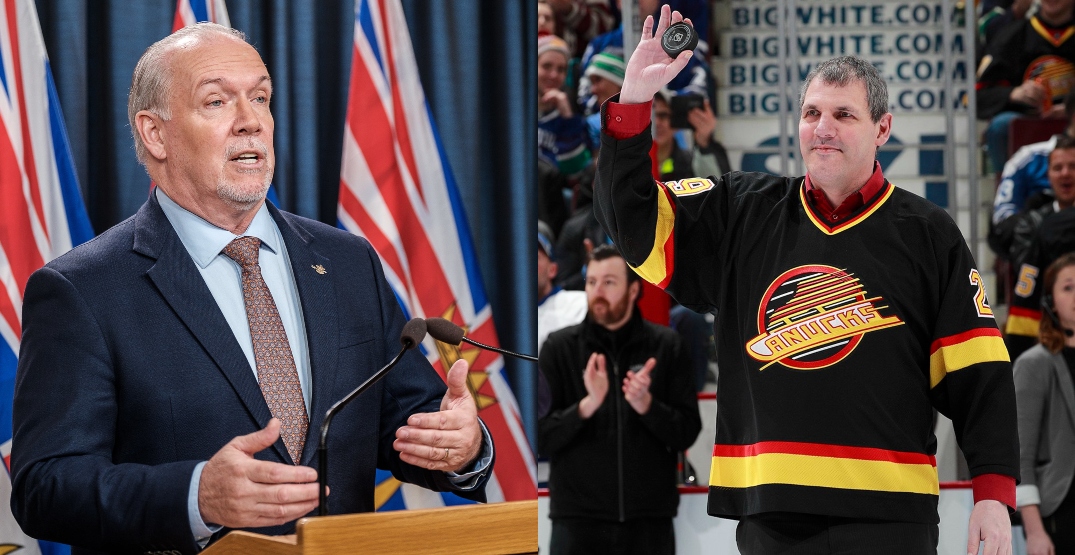 You can now add BC Premier John Horgan to the list of people that are pulling for Gino Odjick to get inducted into the Canucks Ring of Honour.

The campaign to get Gino honoured, started by Canucks fans Marcia McNaughton and Hans Petter Johnsen, has been picking up steam for a few weeks now, following the news that Odjick is battling a rare disease again. It’s the same disease that nearly took his life six years ago.

“Bure’s retired jersey will be safer with Gino on his wing in the Ring of Honour,” said Horgan.

Bure’s retired jersey will be safer with Gino on his wing in the Ring of Honour. @canucks https://t.co/WX37a5wWge

But the BC Premier didn’t stop there, also campaigning for Kevin Bieksa to be honoured.

While we’re at it, let’s get @kbieksa3 up there too!

One thing at a time please, Mr. Horgan.

“We’re very honoured and proud to see the diversity of the support we are getting from near and far,” McNaughton tells Daily Hive. “From players to politicians to First Nations communities across the country. This shows that Gino makes a lasting impression on all walks of life.”

McNaughton and Johnsen are behind a Twitter account dedicated to getting Gino into the Ring of Honour, and have been big fans of Odjick for a long time. Johnsen even once created a website dedicated to following all of Gino’s stats.

“Gino loved it so much he flew Hans Petter (from Europe, where he lives) to Montreal to watch him play and Hans Petter stayed with his family for 10 days,” said McNaughton.

We firmly believe Gino belongs in the Ring of Honour and that the time has come for the Canucks organization to give their heart in return! Let’s do this. Please retweet this thread to show support @fr_aquilini @canucksalumni @Canucks 💙💚

Established in 2010, the Canucks have inducted seven people into the Ring of Honour. Orland Kurtenbach, Kirk McLean, Thomas Gradin, and Harold Snepsts were inducted during the team’s 40th anniversary season in 2010-11, while Pat Quinn (2014), Mattias Ohlund (2016), and Alex Burrows (2019) have been inducted since.

One of the most popular players in franchise history, Odjick is the Canucks all-time leader in penalty minutes, racking up a whopping 2,127 of them. The legendary enforcer did score 16 goals and 29 points once in 1993-94, but Odjick was primarily a fourth liner throughout his career, scoring 98 points in 444 games with Vancouver.

The criteria for ROH induction couldn’t be any looser, with the team saying that the Ring of Honour is used to “celebrate Canucks heroes who have made a lasting impact on the franchise.”

Certainly Odjick has made a lasting impact on Canucks fans.

“We’re pushing for Gino to be inducted because we see how much he means to the community,” McNaughton adds. “Obviously he was a presence on the ice as a player, but his love for the team and the city is still as strong and is still as mutual from his fans. For him to be included in the Ring of Honour is just the most natural thing to us.”

Part of Odjick’s story is how he became a role model to First Nations children. Among the First Nations people Odjick has helped is current Canuck Micheal Ferland, with Odjick helping Ferland to quit drinking back in 2013.

“He has shown how to open many doors and he’s always using himself as an example,” McNaughton said of Odjick, who is proud of his Algonquin heritage. “He came from a small reserve north of Ottawa and he made the most of every chance he got. He has paved the path for young First Nations people to do anything they can.”