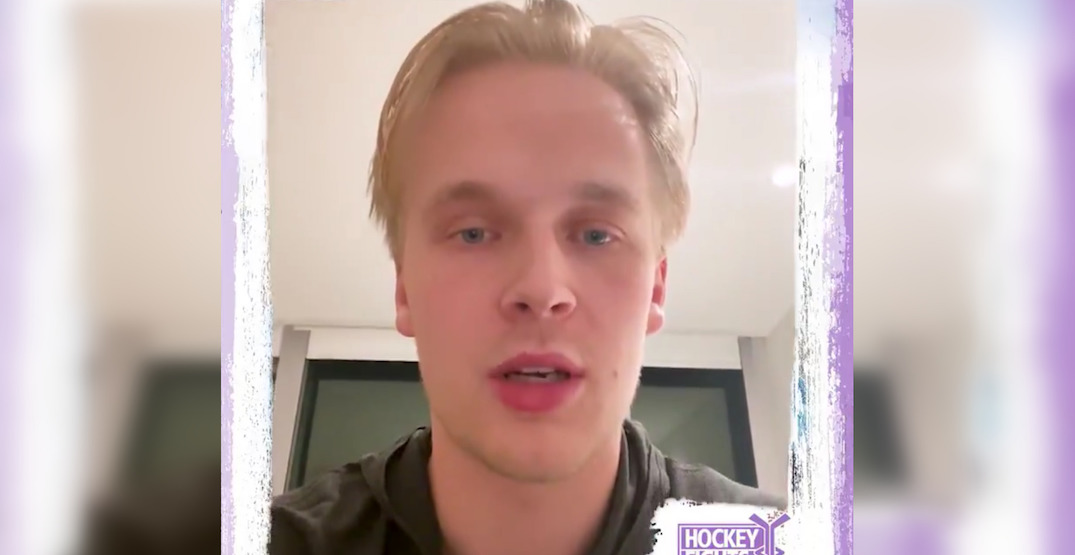 Currently in the fight of his life, Dave Noordam just got a big boost of energy from his hockey hero.

He had surgery to remove a tumour and is facing ongoing chemotherapy and radiation treatment. A self-described cancer fighter, Noordam is also a huge Canucks fan.

A GoFundMe page set up to support Dave has raised over $11,000, with a number of Canucks fans donating money.

That has to be inspiring, but so does this: a personal message from Elias Pettersson.

“Hey Dave… I hope you’re staying strong and fighting hard. We’re all cheering for you in your battle against cancer,” Pettersson says in the video shared by the Canucks on social media today.

November also happens to be Hockey Fights Cancer month in the NHL, in which the league aims to unite the hockey community in support of cancer patients and their families. Typically teams are playing games at this time of year, dedicating one home game to Hockey Fights Cancer.

“When I saw the video, I felt so honoured and blessed,” Noordam told Daily Hive. “Then I felt so much emotion. I was overwhelmed with joy and appreciation.”

Noordam says he’s been struggling of late. He found out yesterday that he needs surgery to have a feeding tube put into him because he’s lost too much weight.

He’s now unable to work, and won’t be able to until at least January or February. That makes the GoFundMe page that much more important.

“I can’t even begin to express how amazing the support has been,” Noordam said of the fundraiser. “It’s really shown me how, like the slogan says, we really are all Canucks. I really feel this has moved from fandom to family.

“I love and respect each person and appreciate the support more than I will ever be able to express.”