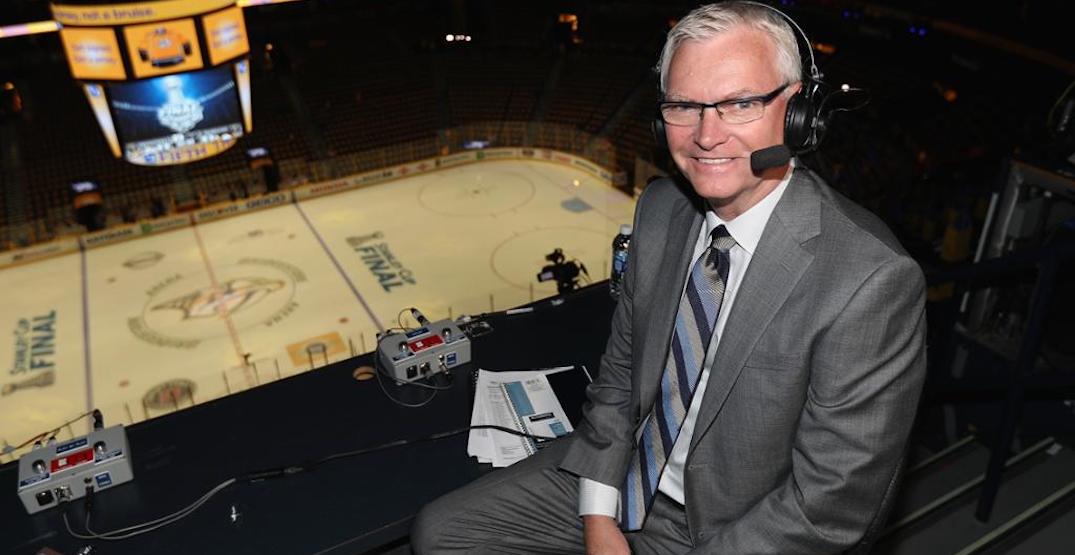 Hughson joined Hockey Night in Canada in 2005 and took over from Bob Cole as the program’s top play-by-play broadcaster in 2008. The Hall of Fame broadcaster called every Stanley Cup Final from 2008 to 2020, as well as men’s hockey tournaments at the Olympic Games in 2006 and 2014.

“It’s been a fantastic run, and I’d like to thank Sportsnet, Hockey Night in Canada and all my friends and colleagues over the years for the tremendous support and countless memories,” said Hughson. “This is a decision I made in consultation with my family, and I’m very much at peace with it. My only goal in this industry was to work at the highest level and on the last day of the season. I’ve had that opportunity a number of times and will always be grateful for it.”

The 64-year-old native of Fort St. John, BC, took a reduced role with Sportsnet last year. Hughson chose not to travel due to the pandemic, which meant that he only called nationally-televised games held close to home in Vancouver. He wasn’t part of Sportsnet’s playoff coverage, paving the way for Chris Cuthbert to call his first-ever Stanley Cup Final. Harnarayan Singh also took on a larger role with Sportsnet’s national coverage.

Sportsnet said in a media release that next season’s full national broadcast team would be announced in the coming weeks.

Prior to becoming Hockey Night in Canada’s top play-by-play broadcaster, Hughson worked on Canucks radio broadcasts in the early 1980s. He became the television voice of the Toronto Maple Leafs in 1982, before joining TSN in 1987, where he did hockey and baseball play-by-play.

After Jim Robson retired in 1994, Hughson took over as the radio play-by-play voice of the Canucks on CKNW. When “CTV Sportsnet” launched in 1998, they did so with Hughson as their top hockey broadcaster. Hughson also called regional Canucks games on Sportsnet, before leaving for CBC and Hockey Night in Canada in 2005.

“Jim is one of the best this business has ever seen,” said Rob Corte, VP of Sportsnet and NHL Production. “Whether on TV, radio or in video games, for many, he has been their soundtrack of hockey. He’s set the gold standard for broadcasting in this country and has accomplished pretty much everything any broadcaster would set out to do in their career. On top of that, he’s a tremendous teammate and an even better person. I respect his decision to step back and spend more time with family, but he is going to be missed by us at Sportsnet, the entire broadcasting industry, his colleagues and his many fans.”

The Hockey Hall of Fame awarded Hughson the Foster Hewitt Memorial Award in 2019, given to him for his outstanding contributions as a hockey broadcaster. Hughson has also been named Canada’s “best sports play-by-play announcer” four times by the Canadian Screen Awards.

“Jim ranks amongst the greatest play-by-play announcers of all-time,” said Bart Yabsley, President of Sportsnet. “His contributions to the sport of hockey in this country have been immense. He has brought tremendous passion, knowledge, grace and care to every single game he’s called, which is a testament to his longevity in this business. He is leaving behind incredibly big shoes to fill after a legendary career.”

“It’s been an honour, privilege and pleasure to join Canadian hockey fans in watching so many fantastic games over the years,” added Hughson. “I look forward to continuing watching together, but from the same side of the television.”