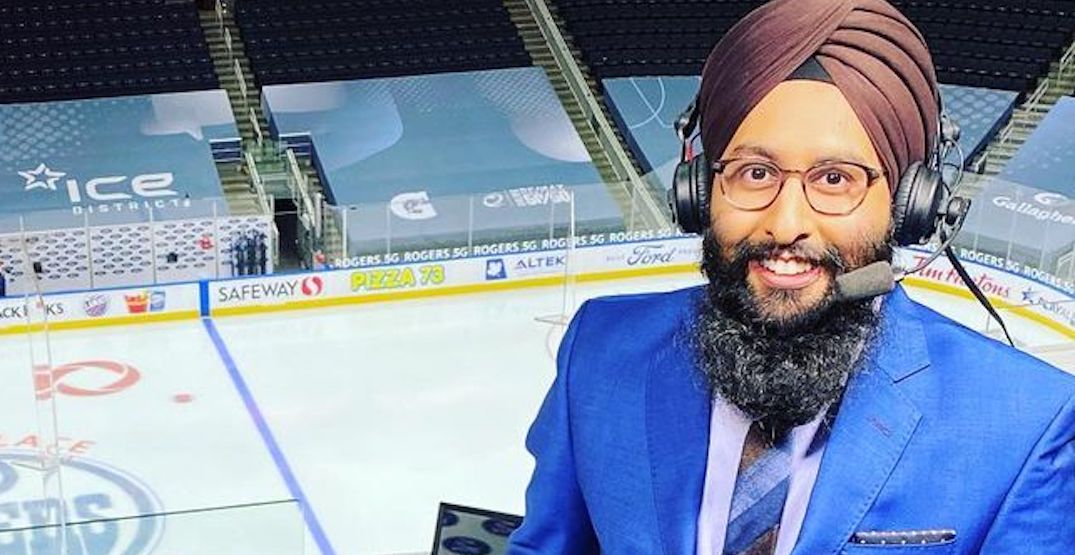 Last week was a dream come true for Harnarayan Singh.

The longtime voice of Hockey Night Punjabi was asked to call play-by-play for an NHL game on Sportsnet last week — in English — for the first time. This would be a big moment for any broadcaster, but it’s especially noteworthy for Singh, who is a pioneer for the South Asian community.

Then on Saturday, Singh got an even greater honour, calling a game for Hockey Night in Canada.

“I was absolutely speechless, I was stunned, and I was stoked,” Singh told Daily Hive when asked what his reaction was to getting tapped to call the Canucks-Oilers game last Wednesday. “It’s something I’ve been hoping for, praying for, for a long time. It was just such a thrill to be able to do this.”

Sportsnet is trying to limit travel during the pandemic, scheduling its broadcasters to cover as many games close to home. Singh, who lives just outside of Calgary, jumped at the chance to make the “quick trip up the highway” to Edmonton.

That drive is a relatively short commute for Singh, who used to fly to Toronto every week — on his own dime — to cover games in the early days of Hockey Night Punjabi.

From those humble beginnings, the significance of this moment wasn’t lost on the Albertan broadcaster.

“It’s so significant for me personally in my life, not just a milestone, but it’s just significant family-wise, it’s significant community-wise,” said Singh. “It’s a really big deal. This is a place that I was told when I was younger, that it wouldn’t be possible for me to be a part of it. So now, to have it come to fruition, I hope to be able to provide inspiration for so many others out there to be proud of who they are and still go for their dreams and goals.”

It’s been nearly five years since Singh’s famous “Bonino Bonino Bonino” call on Hockey Night Punjabi, which became a viral video during the 2016 Stanley Cup Final. That gave him notoriety, but his success since then proves it was not merely his 15 minutes of fame.

Singh has successfully transitioned to English-language broadcasts, first as an in-game host, and now play-by-play. Before his first game last week, he reached out to Chris Cuthbert, who is someone he looks up to and got to know during the playoffs last summer in the Edmonton bubble, for advice.

Singh is planning on adding some of the flare he became famous for into broadcasts in English, though he admits he’s still getting his feet wet.

“It depends on the situation in the game,” Singh explained. “It’s one of those things that you want to save for a bigger goal and a bigger moment, but some things just come naturally, like when [Nils] Hoglander scored. It’s such a cool moment, because not only is that his first NHL goal, but it’s his first NHL game as well.”

What Singh said after Hoglander’s goal probably flew over the heads of many viewers, saying, “It’s time to hand out the sweets!”

“That’s something we do in our in our community,” Singh said. “We do celebrate things by handing out homemade sweets to one another, and so it just came out naturally.”

"Nils Hoglander! It's time to hand out the sweets!"

What a call. 🗣 Congratulations on your English play-by-play debut, @IceSinghHNIC!#NHLonSN | #ItsOn pic.twitter.com/3a8ffJKByd

“It was really cool to have so many people appreciate that. I think that it speaks to the beauty of Canada, because we look at this great game of hockey and it does bring us together and we learn from one another, even despite our differences, we can celebrate them and that was cool to be able to do that.”

Numerous people in the hockey world have since reached out to Singh, wishing him well. Even broadcasters from Sportsnet’s arch-rival, TSN.

“I’ve been overwhelmed. It’s been unbelievable. And it’s not just people within the Sportsnet community. I’ve had people from other sports channels reach out too. It’s been really heartwarming. It almost feels like people have been cheering me on. I couldn’t ask for anything more.”

But as successful as Singh’s first broadcast was, he said he felt like he had a lot of room for improvement.

“I was tentative, there’s nerves, but by [my second game], I felt so much more comfortable… I was more myself, and it was more natural. I had a lot more fun with it.”

His next scheduled broadcast is this Saturday, between the Ottawa Senators and Winnipeg Jets.

“I think the more I get comfortable, the more my personality, in that same style from Hockey Night Punjabi, will come through.”

Too bad Nick Bonino doesn’t play in the Canadian division.

Nerves or not, the outpouring of love and support for Singh has been evident, and for that, he’s grateful.

“From a community level, I think people are just so proud of what we’ve been able to achieve in terms of Hockey Night Punjabi, and then seeing my colleagues and I progress. It just means so much to everybody,” he said.

“This is something that our ancestors never would have been able to envision.”