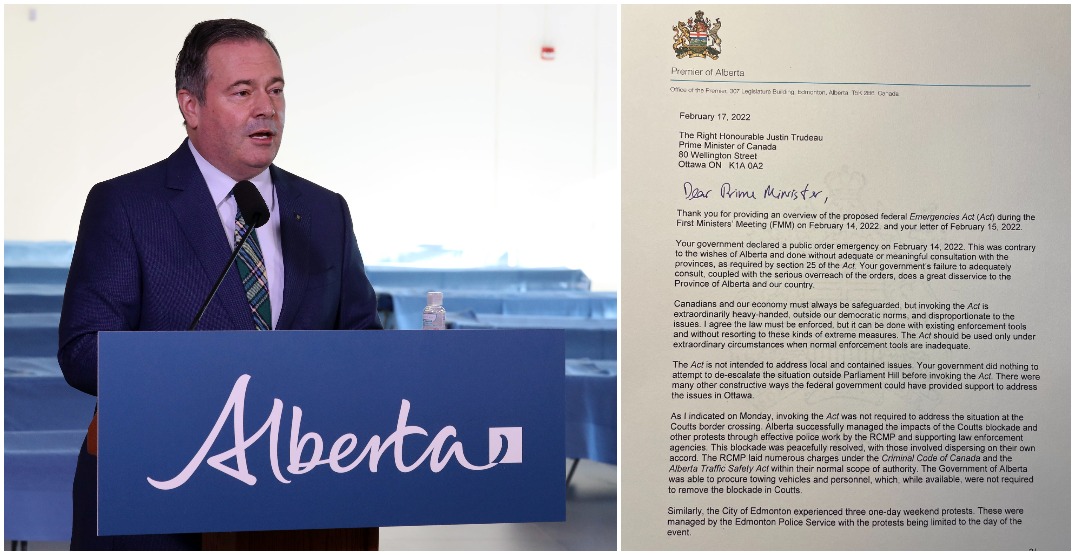 Trudeau’s invocation of the Emergencies Act lets the government get away with more to end the “Freedom Convoys” sprawling across the country, but Alberta Premier Jason Kenney says invoking it is a step too far.

Kenney says Trudeau never should have invoked the Emergencies Act — and he’s willing to go to court to prove it.

I have written to Prime Minister Trudeau outlining Alberta’s opposition to invocation of the Emergencies Act, and calling for an end to the pointless trucker vax mandate and travel restrictions. pic.twitter.com/IWDGyZGXl3

Supported by his UCP government, he says he’s going to file a legal challenge in Federal Court in Ottawa early next week to suspend the use of the act.

“Your government’s failure to adequately consult, coupled with the serious overreach of the orders, does a great disservice to the Province of Alberta and our country,” he wrote in a letter to Trudeau on February 17.

“Canadians and our economy must always be safeguarded, but invoking the Act is extraordinarily heavy-handed, outside our democratic norms, and disproportionate to the issues.”

But not all Albertans agree with him. One user took to Twitter to voice her disagreement, saying Kenney doesn’t speak for her.

THIS Albertan is very happy with all the measures being taken by Prime Minister Trudeau. @jkenney, you DO NOT speak for me.

Others voiced their enthusiasm for Kenney’s take and condemnation of Trudeau’s actions.

In his letter, Kenney points out other police forces in Coutts and Edmonton didn’t need the act to effectively disperse protestors.

Meantime, Kenny’s supporters cite videos of police using pepper spray, batons, and horses to drive away protestors as one example of how the act allows authorities to infringe on citizens’ boundaries.

“The powers under the Act have potential to do irreparable harm to Canadians and our democratic society,” wrote Kenney.

Alberta will launch a Court challenge of the Trudeau government’s invocation of the Emergencies Act, because it is:

A disturbing consequence of the federal use of the Emergencies Act for extra-judicial seizure of assets (below) https://t.co/u5lLKTJ9Qn

“To enable the arbitrary freezing of bank accounts based on opinions people have stated or donations they have made without the need for a court order is undemocratic, disproportionate, and verging on authoritarian,” he wrote, suggesting the government focus on easing concerns about inflation, supply chain issues, and cross-border transportation instead.

Kenney claims six out of 10 provincial Premiers asked Trudeau to not invoke the act during a meeting on February 14, but he did it anyway.

Despite disagreeing with the Prime Minister so fiercely, he agrees that protesters need to stop blocking the core of the capital immediately.

He also takes issue with truckers needing to be vaccinated to cross the border.

Alberta is filing a Court challenge to the unjustified use of the Emergencies Act.

We may also intervene in support of other Court challenges.

As Tommy Douglas said about the use of the War Measures Act in 1970, it’s like “using a sledgehammer to crack a peanut. https://t.co/lx53TNcaJb pic.twitter.com/QD98vKgc32

“Your government’s vaccine mandate for cross-border truckers has no useful public health purpose. It has only served to ignite the very real frustrations of some Canadians who, based on their employment circumstances, have faced greater economic hardship during the pandemic,” he wrote.

“The removal of the vaccine mandate for truckers is critical, not only for Canada but for all of North America.”

Kenney called for the feds to revisit their decision to “keep ineffective international travel mandates, including 72-hour pre-departure testing, arrivals isolation, and quarantining for children under five years of age.”

No other provinces have announced plans to join the court challenge.