Fireworks erupt from the barge in English Bay on Saturday, July 29, 2017 as Japan, represented by AKARIYA Fireworks, kicks off the 27th annual Honda Celebration of Light fireworks competition. (kdmart / Instagram)

This was the Kanto region-based pyrotechnic company’s second championship win in Vancouver since 2014 when it participated in the competition for the first time and won.

Its theme for the show on Saturday, July 29 was “Land of the Rising Sun”, telling the story of the country’s history from the Shogun era to modern times. 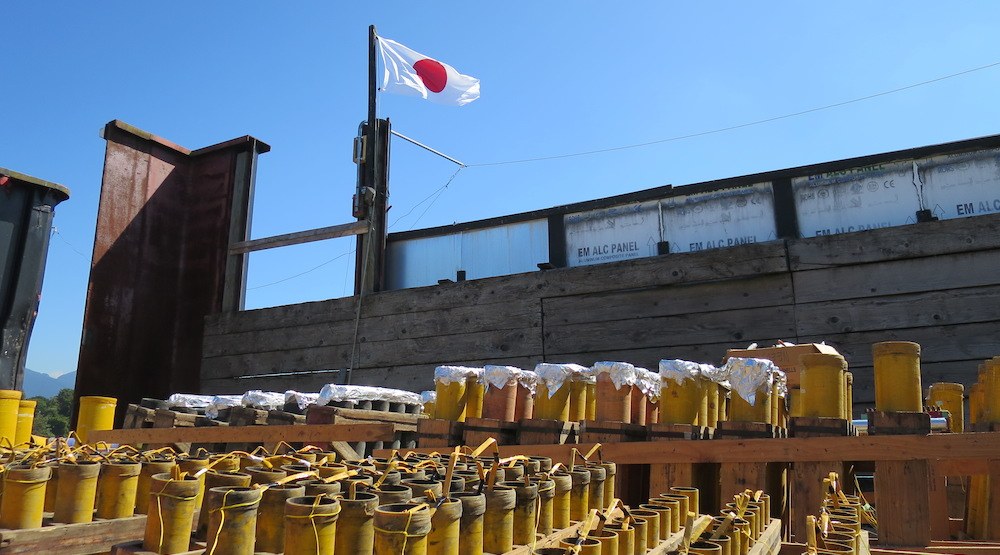 The accompanying fireworks soundtrack featured music from The Last Samurai by Hans Zimmer, Taiko from Cirque du Soleil, and Two Steps From Hell by Audiomachine. It chose “Hallelujah” by Leonard Cohen to fulfill its competition requirement of including a Canadian song.

“Congratulations to Team Japan on their victory at the 2017 Honda Celebration of Light, putting on a show that won’t soon be forgotten,” said Vancouver City Councillor Raymond Louie, who is a long-time judge for the fireworks.

“They put on an intense pyrotechnic display that resonated with the public and expressed a compelling theme. We congratulate AKARIYA Fireworks on their performance and look forward to welcoming them at the Honda Celebration of Light once more in the future.”

Full video of Japan’s 25-minute show at the 2017 Honda Celebration of Light:

According to organizers, it is estimated over a million people packed the beaches and parks around English Bay over the course of the three nights this year.

“We want to thank all of the partners, sponsors, staff, volunteers and members of the public who continue to come together to make the festival a fun, safe, family-friendly event,” said Paul Tilbury and Heather Owen, co-chairs of the Vancouver Fireworks Society, the non-profit organization that stages the event annually, in a joint statement.

“We look forward to dazzling everyone with yet another phenomenal Honda Celebration of Light next summer!”

The winner of the People’s Choice award, determined by members of the public who voted through the festival’s app, was also won by Japan.

Organizers will announce the dates for the 2018 event this fall.

How the Honda Celebration of Light fireworks are judged

Viewing the fireworks from the Keg Lounge Stage atop the English Bay Beach bathhouse building, the panel of judges are asked to evaluate each fireworks show based on the following six criteria:

Panel of judges for the 2017 Honda Celebration of Light

Past winners of the Honda Celebration of Light