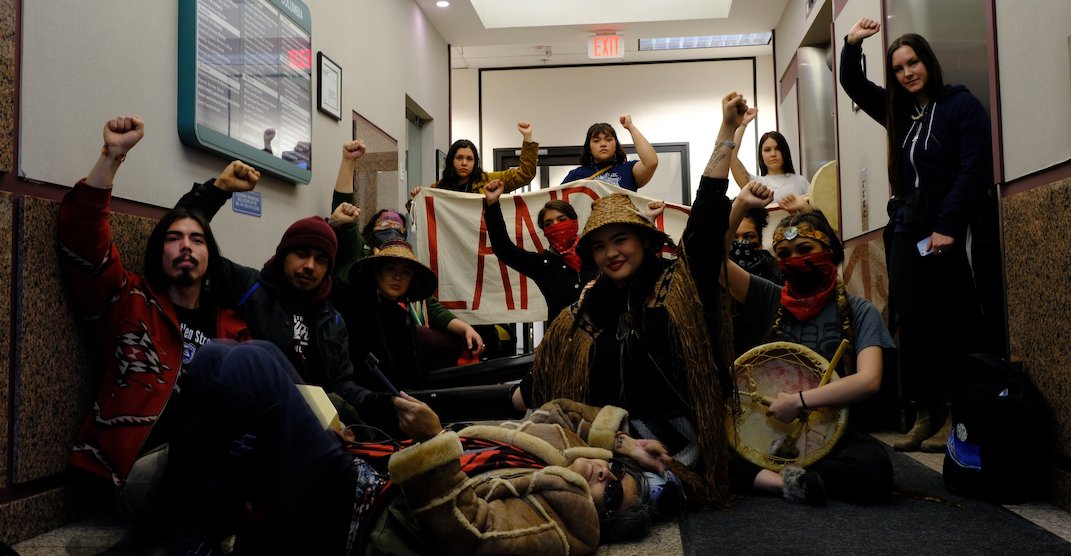 A number of Indigenous youth have been arrested following an overnight occupation of the Ministry of Energy, Mines and Petroleum Resources in solidarity with Wet’suwet’en.

The group, called Indigenous Climate Action, also sent a letter to the minister yesterday, explaining their occupation and expressing solidarity with Wet’suwet’en, and against the construction of the Coastal GasLink pipeline.

“As Indigenous youth, we stand with Wet’suwet’en assertion of sovereignty because we understand that Indigenous Peoples will cease to exist without our land; our languages, cultures, and future generations cannot survive without our it,” says the letter.

“Indigenous youth are not only inheriting a climate crisis driven by fossil fuel projects like CGL, but Canada’s legacy of colonization, genocide, and gendered violence against Indigenous women, girls, and Two-Spirit people. In protecting the lands from industrial development, we are protecting our bodies from violence.”

Indigenous youth occupying BC Ministry of #Fracking at 1810 Blanshard. Come down and show your support! #WetsuwetenStrong #yyj #yyjpoli #bcpoli pic.twitter.com/EULt4F2Pd5

According to Victoria police, the negotiation between police and protesters lasted 15 hours, and no youth were arrested.

“Twelve adults were taken into custody this morning following a protest which lasted several hours,” said Victoria Police Department in a release.

According to police, officers were called to the building at the 1800-block of Blanshard Avenue at 11 am yesterday, “for a report that a group of protesters had occupied the lobby area.”

Police say they worked with representatives of the group and the province to find a resolution.

“Plain clothes community liaison officers attended and remained on scene to listen to and speak with the participants,” said the release.

“Officers facilitated access to medicine, food, and water. Officers also assisted parents who arrived to pick up youth who were present at the protest.”

At the action led by Indigenous youth at the ministry of energy, mines and petroleum. The Vic PD have the building locked down and are not allowing any entry. Supporters are gathering outside. pic.twitter.com/FQQKzRiqvK

A number of tweets and Facebook live videos captured the arrests of the peaceful protesters overnight, and were circulated on social media.

Social media reports indicate that the youth occupied the offices for nearly 24 hours.

Daily Hive has reached out to the organizers of the protest but did not receive comment by time of publication.

Police say that throughout the evening, additional protesters arrived outside the building, and patrol officers, the Community Services Division, Investigative Services Division and the Integrated Crowd Management Unit attended as a result.

“Despite numerous efforts over 15 hours to resolve the situation without arrests, officers were requested to remove the protesters by the building owner once negotiations failed,” said the release.

“Officers acted under the lawful authority of the Trespass Act to effect these arrests.”

Despite reports of force being used by officers on social media, Victoria PD affirm this was not the case.

“The minimum amount of force was utilized to effect the arrests. As such, the arrests took place over a four-hour period,” said the release.

“During the arrests officers were required to carry protesters from the inside of the building to waiting police vehicles.”

Police say, protesters outside of the building tried to “impede the lawful arrests.”

“Protesters surrounded the officers, who were pushed and shoved while carrying arrestees to the police vehicles. One of these protesters from outside the building was also taken into custody,” said to police.

Police say protesters were transported to VicPD cells for processing, and no injuries were reported.

According to Victoria PD, no charges have been laid at this time.

“We respect the right for people to engage in peaceful protest,” said a media spokesperson for the Ministry of Energy.

The Ministry says that the government is committed “in partnership with First Nations to meaningfully advance reconciliation in BC.” 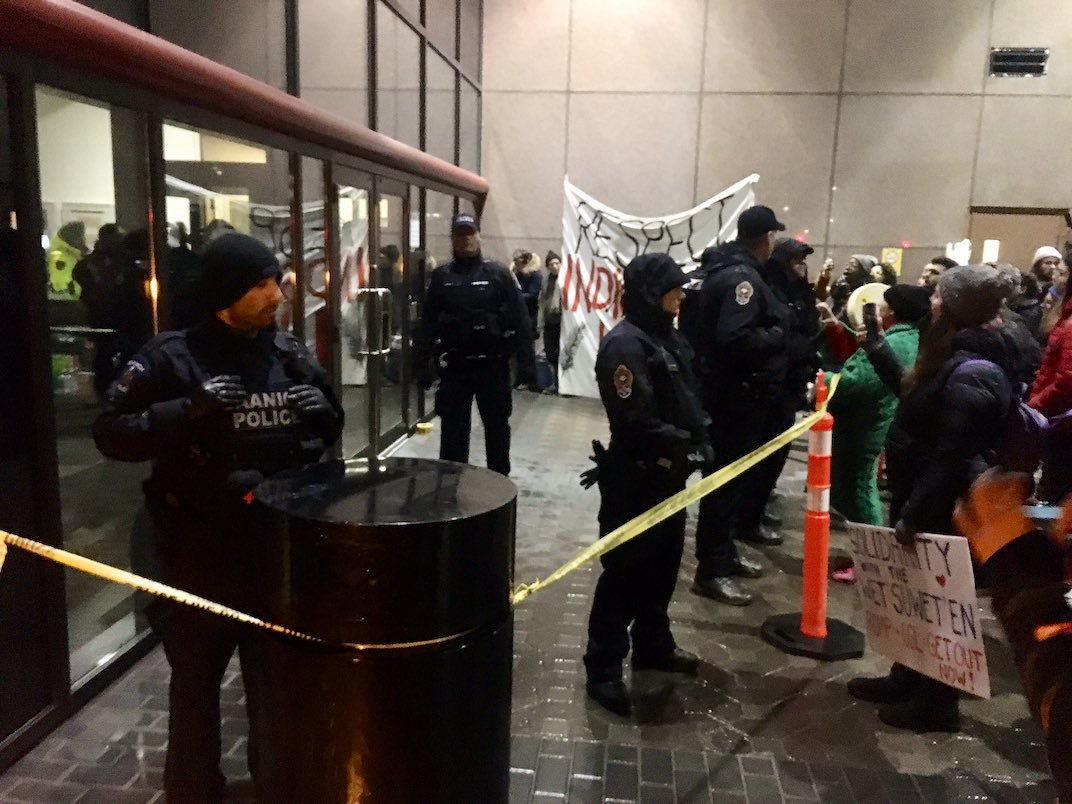 “With regard to the Coastal GasLink project, BC conducted extensive consultations with Indigenous Nations and has also signed agreements with the vast majority of Indigenous communities along the route.”

Scott Fraser, Minister of Indigenous Relations and Reconciliation, is travelling to Smithers today, to meet with Wet’suwet’en Hereditary Chiefs, Premier Horgan said in a letter to chiefs on Monday.

“The Premier proposed this meeting to continue dialogue and to try to achieve a peaceful and safe resolution on this issue,” said the Ministry spokesperson.

The last of the Indigenous Youth was arrested this morning at the office of the B.C. Ministry of Energy Mines and Petroleum Resources. The final arrest was at 5:50am. #WetsuwetenStrong pic.twitter.com/egv00dxHh1

“Separately, government has been engaged in the current discussions with Wet’suwet’en hereditary chiefs on reconciliation since early 2019.”

“It’s important to note that these talks are not related to any specific project but are focused on building our relationship and meaningfully advancing reconciliation.”

“When Wet’suwet’en land is under attack, what do we do? Stand up fight back,” the crowd chanted.

When Indigenous youth are under attack, what do we do? Stand up fight back.”