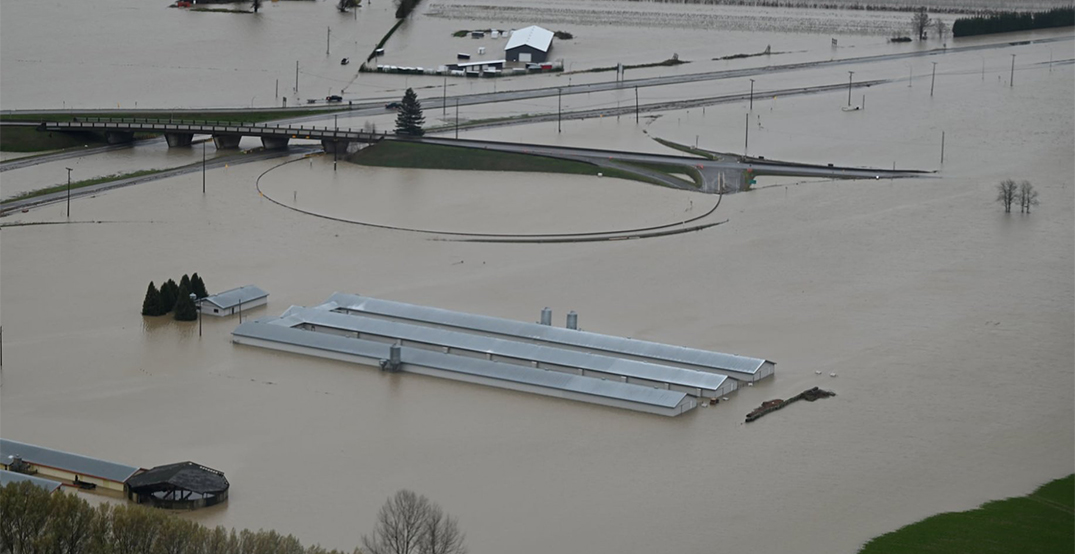 BC’s Minister of Agriculture confirmed that plans to dispose of farm animals’ bodies that died in devastating flooding could involve designated places to burn them.

Thousands of animals are estimated to have died when barns in the Fraser Valley became submerged in several feet of water during devastating flooding last week. Heart wrenching images of people trying to save livestock were shared during the crisis, but many more animals drowned in the high water, Minister Lana Popham said last week.

On Monday, she confirmed the province is working on plans for dealing with the carcasses.

“We’re working with local governments on capacity at landfills and possible incineration areas,” she said.

Plans will become more detailed in the days ahead, and Popham added many farms are still under too much water to begin retrieving the dead animals.

“Temperatures are cool. We’ve got a bit of time,” she said.

She also shared stories of how brave rescuers saved some animals. She recounted how military personnel stationed in Abbotsford transported chickens to a safer barn and tweeted a video of a helicopter dropping feed into a pig farm in Abbotsford.

2day water & emergency feed for farm animals continued to be a high priority. We airdropped 4 tons of feed to a hog farm in Abbotsford to feed about 4,000 to 5,000 hogs. Thank-U so much to our staff who continue to work around the clock & who are doing the best they can. #bcpoli pic.twitter.com/rQcfRjOSwh

We are very grateful to our Canadian Military for assistance. These folks arrived today to help out at Oranya Chicken Farm in the Fraser Valley. #bcpoli #bcflood pic.twitter.com/9iVYib0XhK

She also thanked volunteers who airlifted horses to safety in the Nicola Valley.

“[The horses were] sedated, put into feed bags, and helicoptered out of the area,” Popham said.

In addition, Popham announced farmers and veterinarians would be able to access permits to travel on waterlogged roads to get to their farms. Highway 1 between Whatcom and Cole roads opened to agricultural vehicles at noon on Monday, providing another way to access the Sumas Prairie.

Good news for farmers trying to get back to their farms! Sections of Hwy 1 now open in Abbotsford for emergency access to farms between Highway 11 east to Cole Road. Learn more: https://t.co/pWBCIDexP6 #bcflood #bcpoli

“The agricultural community is exhausted,” she said. “It’s been a lot of pressure. But the messages of support from British Columbians are making a big difference.”