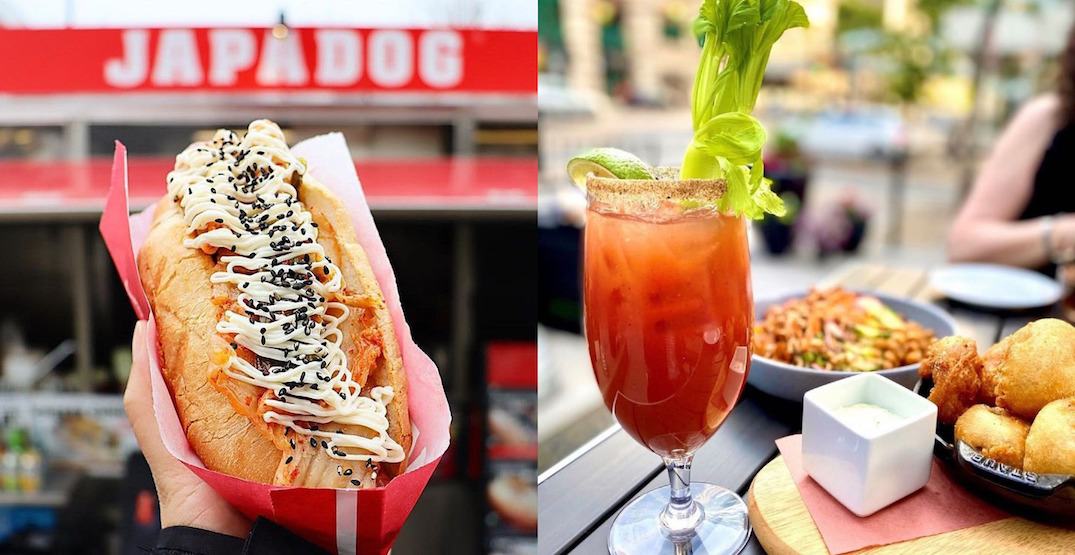 Canada is known for a few iconic foods that represent the many different ways that we eat, from coast to coast.

From cheesy poutine to sweet Nanaimo bars, pierogies to bannock, these eats come from the multicultural backgrounds that make up the country.

You’ll find the best versions of these foods in cities, towns, and regions across the country – each perfecting the particular dish they’ve become known for.

Here are the country’s most iconic food items and where to get them.

Possibly one of Canada’s most iconic dishes, poutine originated in rural Quebec snack bars in the 1950s. Comprising French fries, cheese curds, and gravy, poutine is a good winter food, a good drunk food, a good comfort food – just all-around good. Luckily you can get this iconic dish around the country now, but if you want to go right to the source, try out La Banquise or Patati Patata Friterie de Luxe in Montreal, where poutine reigns king. 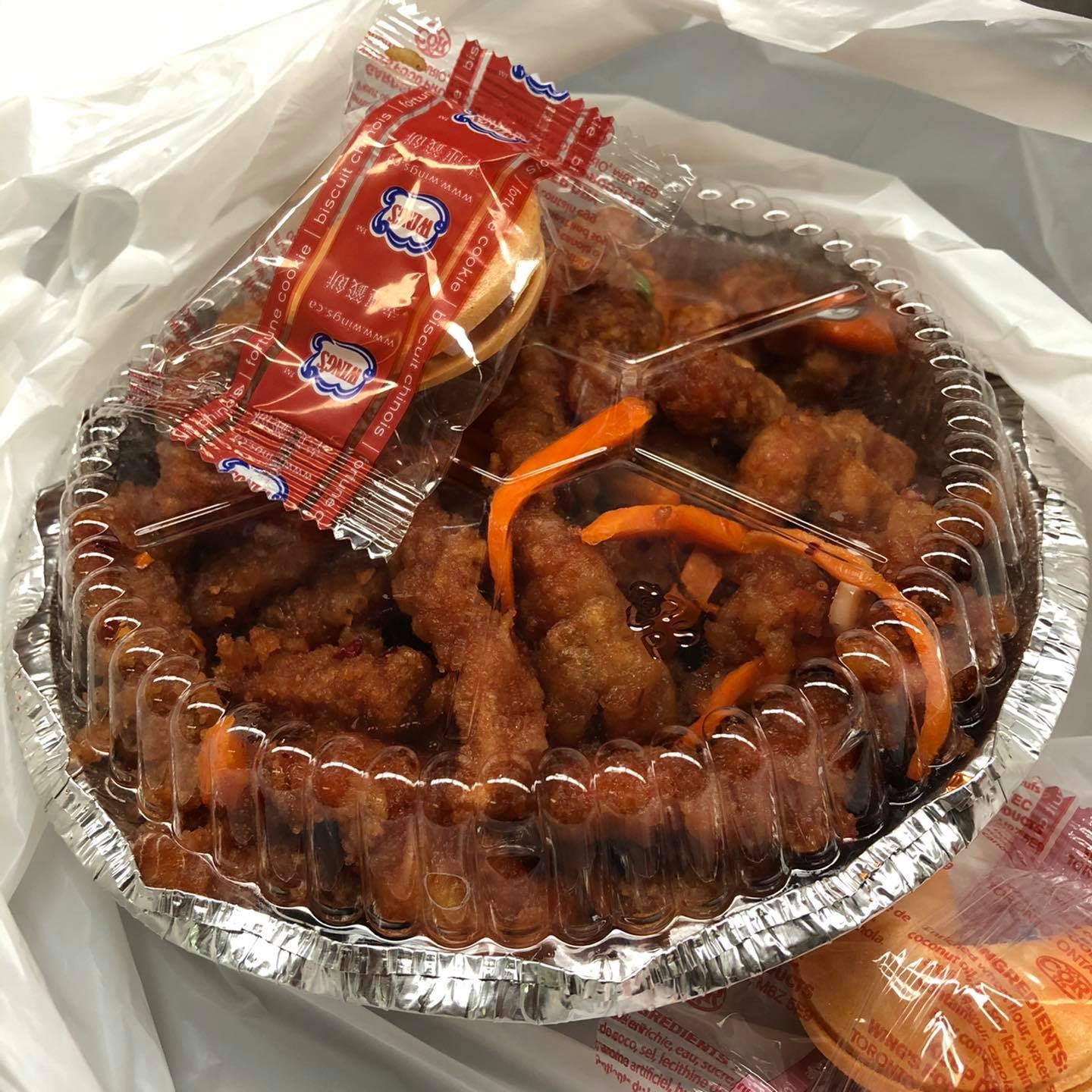 This iconic Chinese-inspired dish has many different variations from province to province, country to country, but the version that we know was invented in Calgary, Alberta. More specifically, ginger beef as a dish was conceptualized at the Silver Inn Restaurant, where George Wong, an immigrant chef who arrived in Canada in 1975, hoped to create something with the province’s famous beef.

“The dish was called ‘deep-fried shredded beef in chilli sauce’ as it is still called on our menu today,” the restaurant told Dished for an article on the dish.

A post shared by The Westin Calgary (Downtown) (@westincalgary)

The classic Caesar, sometimes known as a bloody Caesar, was invented in Calgary in 1969 by Walter Chell at the Calgary Hotel (now called the Westin). Typically served with vodka, clam juice, tomato juice, spices, and Worcestershire sauce – as well as a myriad of other accoutrements – the story goes that Chell was inspired by spaghetti alle vongole, a pasta dish made with clams. The result is a super savoury cocktail that is consumed all throughout the country.

Alberta is known as cattle country, which also means it’s known for its superior beef, and there’s no better place to try that beef than in Calgary. To get a taste of the province’s best, check out Caesar’s Steakhouse, an old-school spot that serves a classic steak dinner.

Nanaimo Bars in Nanaimo, BC

This Canadian dessert has three layers: a crumbly coconut graham crust, a creamy custard filling, and a rich chocolate ganache. Named after the Vancouver Island city, this treat can now be found all over the country. Nanaimo’s tourism board actually offers a Nanaimo Bar Trail so you can try out a few different versions of the classic in several local spots, including A Wee Cupcakery and Perkins Coffee Company.

This sweet treat is almost stereotypically Canadian: maple sap is boiled past the point of becoming maple syrup before it is poured onto snow where it cools and hardens slightly. Tire sur la neige is traditionally found in Quebec, parts of Eastern Ontario, New Brunswick, and Northern New England, but if you want to get it in a very authentic context, go to Quebec City’s La Petite Cabane a Sucre. 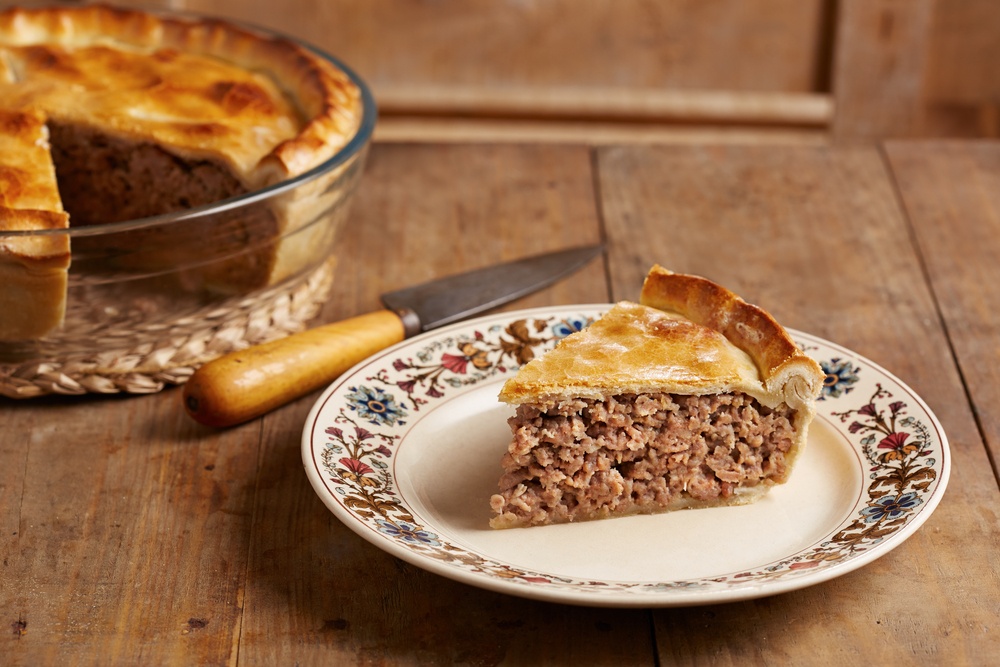 This French-Canadian meat pie originates in Quebec and is made with minced pork, beef or veal, and potatoes. It’s traditionally a part of Christmas Eve celebrations, but, if you’re not making it from scratch at home, one of the best spots to try it out is at Quebec City’s Aux Anciens Canadiens, the oldest house in Quebec that has been transformed into a restaurant serving traditional Quebecois cuisine.

This berry pie is a prairie classic. Usually served with vanilla ice cream, the pie is filled with, you guessed it, Saskatoon berries. To sample a slice of the dessert from its source, go to The Berry Barn just southwest of Saskatoon, where the home-style cooking is berry-centric and the view of the South Saskatchewan River is unimpeded. 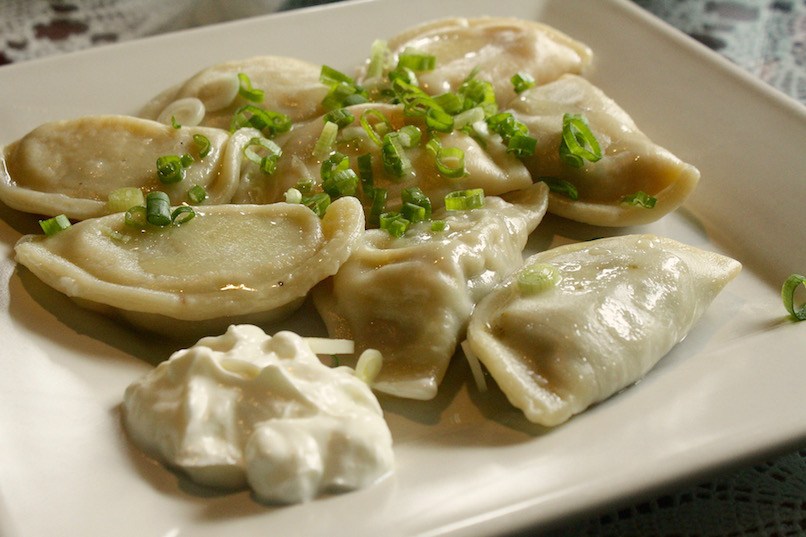 Manitoba is home to a large Ukrainian diaspora, meaning there’s a ton of great Ukrainian food around. This is especially true in Winnipeg, where pierogies top menu lists in eateries around the city. And while pierogies are not technically Canadian in origin, they have become emblematic of our adoption of multicultural eats from a largely immigrant population. There are a ton of shops serving the little dumplings in Winnipeg; Loaded Pierogi or Mom’s Perogy Factory are both good choices. 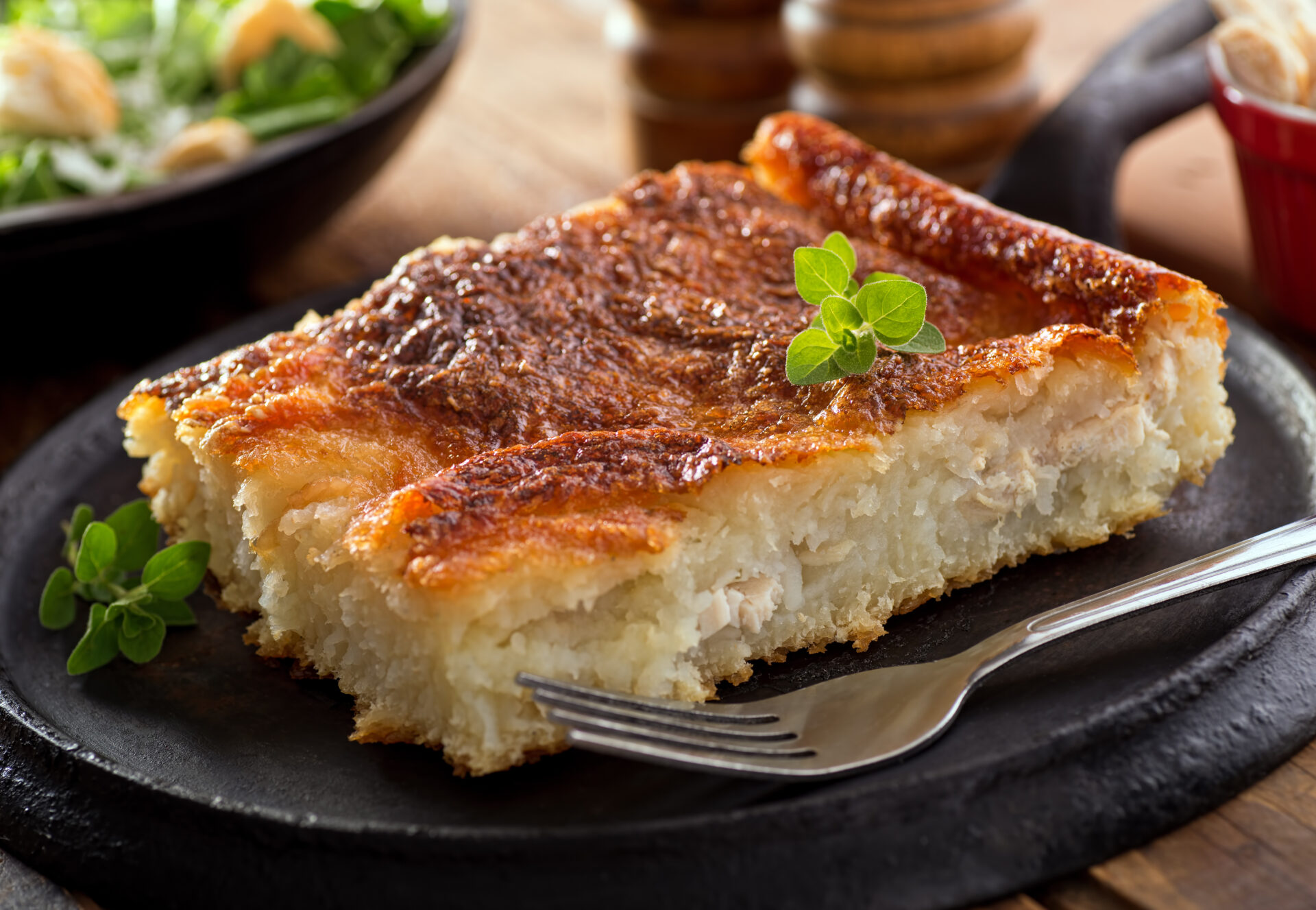 Rappie pie is an essential Acadian dish comprised of potatoes and meat. The dish is around 250 years old and, more than just a historical food item that is part of the Acadian people’s story, the dish is actually delicious. The spot perhaps best known for this traditional dish is Cafe l’Acadie in Nova Scotia’s Indian Harbour. 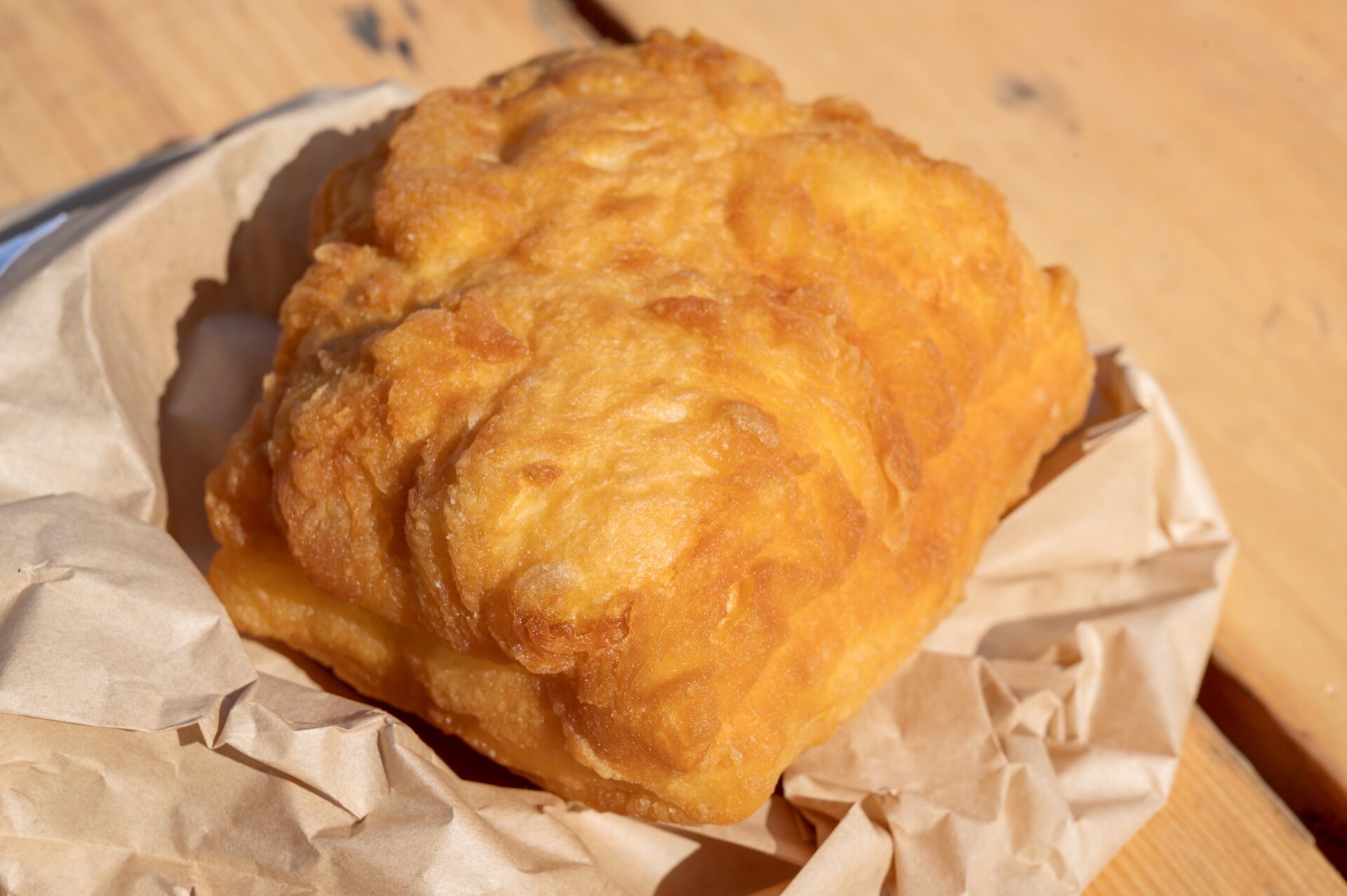 Bannock is a traditional Indigenous food that is unleavened bread made with flour, lard, salt, water, and sometimes baking powder. It became a dietary staple among fur traders and colonial settlers, but most Indigenous nations in North America have some version of the dish. Nowhere is it more an integral part of the cuisine though than in the Northwest Territories, where it remains an essential comfort food. Give it a try at the Yellowknife restaurant Bullock’s Bistro.

You can’t go to Vancouver without trying its iconic Japadog. The combination of a hot dog with Japanese accoutrements – think kewpie mayo, nori, and tempura, among numerous other options – is unsurprisingly delicious. The chain all started with a little cart parked in downtown Vancouver and got the gold stamp of approval when the late, great Anthony Bourdain paid it a visit on his show No Reservations in 2007.

It’s a debate as old as time itself: NYC bagels versus Montreal bagels? We all know, though, that the Montreal style reigns superior. Denser, slightly sweeter, and baked in a wood-fired oven, the Montreal-style bagel can’t be beat. Go to local favourite St-Viateur Bagel to get the real deal.

Beaver Tails are deep-fried dough in the shape of – you guessed it – a beaver tail, which is then rolled in cinnamon or sugar or a variety of other toppings. It’s typically served at kiosks during events or festivals, but the eponymous chain opened its first location in Ottawa in 1980.

The story goes that the Halifax donair was invented in the 1970s by a Greek immigrant who adapted the traditional gyro to an East Coast Canadian taste. This particular creation involves a pita filled with shaved beef, tomatoes and onions, with a signature sweet sauce. It’s best eaten late at night after a few drinks, but is great at any time of day. Go to the place where it all started to get the true experience: King of Donair.

The Windsor-style pizza is not particularly well-known to those outside of Windsor, but to those in the know, it’s an iconic dish. The special pizza entails shredded pepperoni instead of rounds, as well as canned mushrooms, which result in a less-soggy pizza. One of the OG spots for this style of pizza is Armando’s Pizza which, technically, is located in Amherstburg, just outside of Windsor proper.