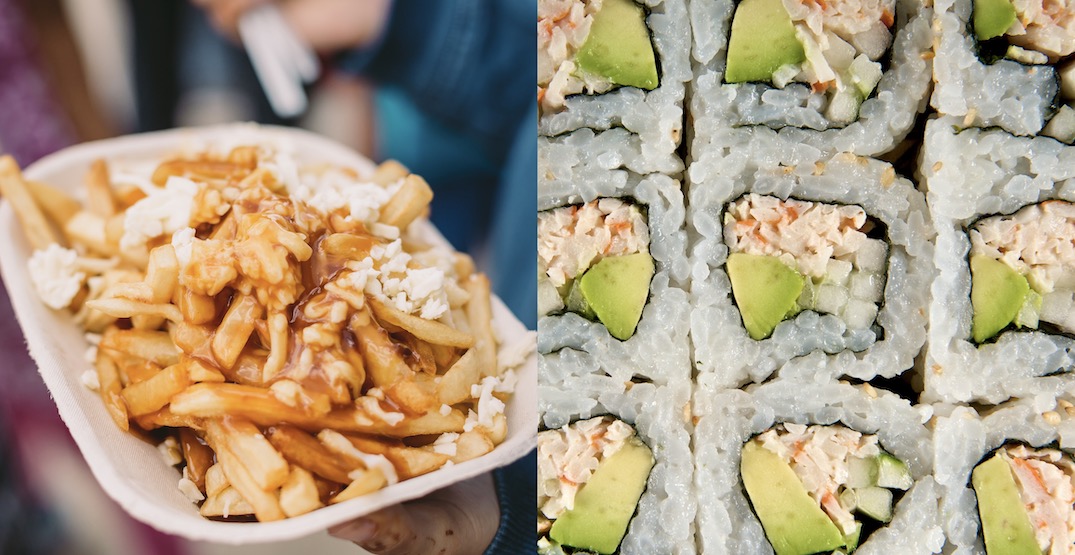 As a multicultural society, Canada’s true spirit is embodied in food.

From poutine to ginger beef to the iconic Halifax donair, this nation has no shortage of mouth-watering eats.

Here are the ultimate Canadian foods that you must try at least once in your life.

Naturally, we’ll start with poutine, since nothing really gets more Canadian than a bowl of fries with hot gravy and cheese curds. The dish originated in Quebec in the 1950s, and today, it is often identified as “Canada’s national dish.” While the traditional recipe is already delicious, poutine with toppings like pulled pork and bacon is also very popular.

Tarte au sucre, also known as sugar pie, is a traditional Quebec specialty. The pie has a single crust filled with brown sugar, vanilla, cream, and sometimes maple syrup. The perfect tarte au sucre should have a jelly-like texture but still be solid enough to slice. It is a delicious treat and a popular holiday dessert in Canada.

The pie dates back to the 19th century, and it is a true Canadian Prairie classic. The name “flapper pie” is unique to the Canadian Prairies, and those from Eastern Canada or BC might not know what it is. It is a graham crumb crust pie with a creamy custard filling, then topped with meringue or whipped cream.

Tiger tail ice cream is a Canadian favourite and not often found elsewhere. Also known as “tiger tiger” or “tiger flavour,” it is a type of orange flavoured ice cream with stripes of black licorice running through it, giving it a tiger tail look.

Tourtiere is a Canadian meat pie dish that originated in Quebec, and it is still a traditional part of Christmas and New Year’s Eve meals in Quebec. The pie is usually made with potatoes and a type of meat, such as minced pork, veal, or beef. The best part is that you don’t have to fly to Quebec to get a taste of it because it is sold in grocery stores all across Canada.

A Caesar, also known as a Bloody Caesar, is a cocktail that holds a special place in Canadians’ hearts. The drink was invented in 1969 by Walter Chell in Calgary when he mixed vodka with clam and tomato juice, Worcestershire sauce, and other spices. Today, over 350 million Caesars are consumed annually, and the classic Caesar has also inspired many modern varieties.

Montreal bagel is a distinctive variety of handmade and wood-fired baked bagels. It is typically sweeter, smaller, and thinner, compared to New York bagels or East Coast-style bagels. It was brought to Canada by Jewish immigrants from Poland and other eastern European countries, and it remains a popular breakfast choice in Montreal.

It is a type of deli meat product that can go on literally everything. Try it on its own, with cheese, or get one of the Montreal-style smoked meat sandwiches, which are made with rye bread and piled with hand-sliced smoked meat.

As Canada’s signature snack, the crunchy chips are doused in a reddish, ketchup-flavoured seasoning. We can all agree that the best ketchup chips are made by Lay’s, and they are sold only in Canada. The snack is weirdly addictive, and our American friends have made several attempts at creating a ketchup chip that is as good as our Canadian version (and didn’t quite succeed, obvi).

The Nanaimo bar is a no-bake dessert item named after the city of Nanaimo, BC. A classic Nanaimo bar consists of three layers: a coconut crumb-base, custard-flavoured icing in the centre, and another layer of chocolate.

This is a Canadian-Chinese dish made from beef, ginger, and a distinctive special sweet sauce. The beef is often stir-fried with carrots and onions, and the dish can be found in many Chinese restaurants all across Canada. It was created during the 1970s by chef George Wong of Calgary, Alberta.

Shreddies is a breakfast cereal brand made from whole grain wheat. In Canada, production began in 1939 before branching out to the UK in 1953. It comes in many flavours like chocolate, honey, and banana bread, but nothing beats a bowl of classic Shreddies.

Don’t be fooled by the “Swiss” in its name, because the brand is 100% Canadian. The chain restaurant, Swiss Chalet, is famous for its roasted chicken and Chalet sauce. The most popular dish on the restaurant’s menu is the Quarter Chicken Dinner, which includes a roasted chicken leg or breast with chalet sauce, a bread roll, and a side dish. The sauce is so good that Lay’s even created Chalet sauce flavoured chips.

With files from Christy Wang