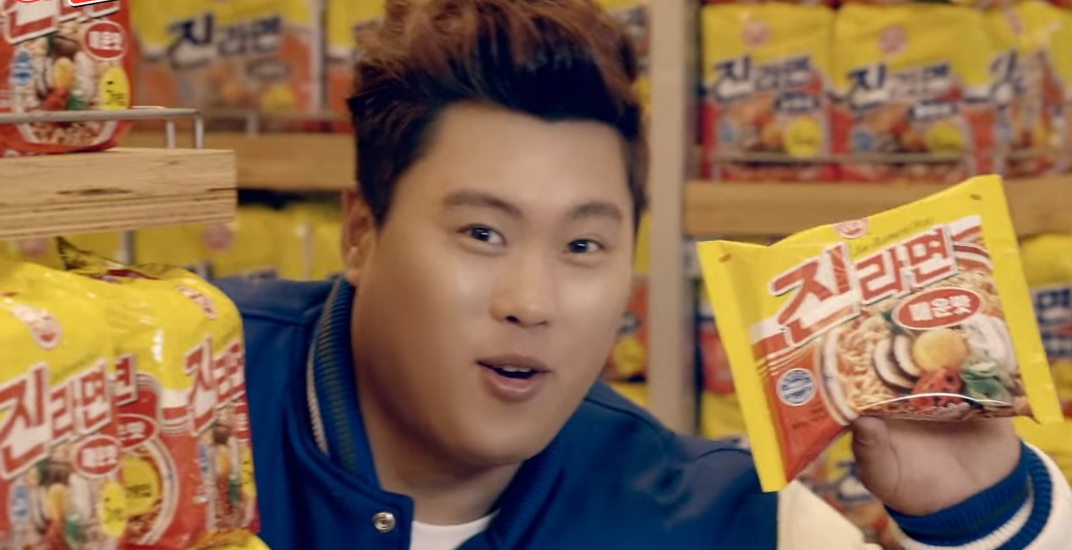 Hyun-Jin Ryu is the Toronto Blue Jays’ newest $80 million man, but in his home country of South Korea, he rakes in the dough as a pitchman for many companies.

Over the last few years, he’s starred in commercials for everything from ramen to credit cards, to chicken and watches. As one of the biggest stars in his country, he is one of the most recognizable faces in South Korea.

The 32-year-old lefty has yet to sign his first official endorsement as a member of the Blue Jays, but these are some of the best Ryu commercials you’ll find as you spiral down the YouTube rabbit hole.

Ryu’s most recognizable and plentiful commercials come as a pitchman for Ottogi Jin Ramen. In this spot, he’s handling out ramen to anybody within his throwing range.

Here, Ryu attacks a bowl of ramen with the speed and efficiency of a competitive eater.

According to the LA Business Journal, Jin Ramen and the Dodgers teamed up for a promotion where customers could get 2-for-1 Jin Ramen at select grocery stores the day after Ryu won a game.

Watch closely and you’ll notice that some players in this commercial bare resemblance to Ryu’s former Dodgers teammates, namely the actor with a chinstrap beard who vaguely resembles Clayton Kershaw.

Ryu once again wants to spread the good word about this ramen by literally sending out into the universe.

Ryu shows off his rapping skills in this Korean commercial for the NH Card. He raps alongside some animated emojis over top of the Mission: Impossible theme as the backing track.

I mean, who hasn’t found themselves with an empty fridge on a Friday night, poured themselves a beer, laid down on a coach full of stuffed animals and then ordered in some fried chicken?

Ryu wears some face paint in the colours of his home country and goes to town on some BBQ Chicken in this commercial for the chicken chain.

Trust us, nothing cures those hunger pains like a fried chicken drumstick… sitting in a bus or train stop shelter.

Hanmi Bank is an American-based bank, but they cater to Korean communities throughout the United States. Ryu played the part of a baker in this commercial, presumably getting some help from his local bank.

Timing is everything in the game of baseball, so a partnership between Ryu and Tag Heuer watches made perfect sense.