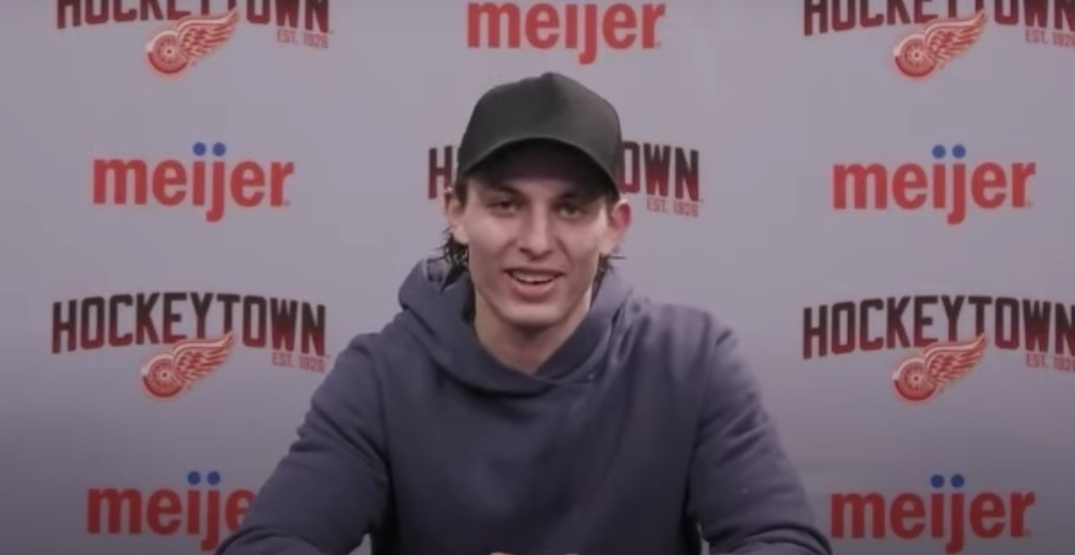 Hockey is back. Finally.

The Canucks hit the ice at Rogers Arena yesterday for the first time since last July. They’re going to play an evening scrimmage tomorrow, and the first game of the season in Edmonton is just eight days away.

It’ll be a season unlike any other, but that’s okay.

These Snapshots are unlike any other too.

Stecher told reporters in Detroit this week that he drove from Vancouver with Phoebe, his beloved Bernese mountain dog.

“I couldn’t be more proud of her,” said Stecher, a proud dog owner. “There was no way I was coming out here without her.”

It took Stecher 35 hours in total, though he did make some stops along the way, including staying at Brock Boeser’s place in Minnesota.

Upon arrival to Detroit, Stecher had to quarantine for 10 days. He’s now enjoying going for walks with Phoebe in the Detroit suburb of Birmingham.

“We’ve found a couple parks here. Got a good trail. I’ve been walking around and people are very friendly in the neighbourhood saying good morning to me every day and just saying hi. And I’m sure they have no idea who I am,” he said.

That’ll be different for him.

Fans will watch Canucks games at Rogers Arena after all

Want to watch the Canucks play at Rogers Arena this season? You can, but there’s a catch.

The Rogers Arena Sportsbar will be open on all Canucks game days, starting one hour before puck drop, a Sportsbar spokesperson told Daily Hive. The restaurant won’t be open-air to the rink, as it usually is, so none of the seats will have a view of the action on the ice.

There are plenty of big screens to see the Canucks play though — for all home and away games.

Don’t believe the hysteria of some fans, Vasily Podkolzin had a good World Junior tournament for Russia. So did the Canucks’ other lower-profile prospect in the tournament, Sweden’s Arvid Costmar.

Both players were named among their country’s top three players of the tournament.

Both #Canucks players (Vasili Podkolzin and Arvid Costmar) were named among their country’s top 3 players of the tournament. 🙌🙌🙌

Russia’s captain, Podkolzin wasn’t able to add to his point total against Canada, as his team was shut out. He was named his team’s player of the game though, and he was most certainly the best Russian player in the tournament.

He has four points in six games heading into the bronze medal game, but his 200-foot game is impressive — maybe even NHL-ready.

Getting Podkolzin out of Russia

Speaking of Podkolzin, it sounds like Canucks GM Jim Benning wants to get him out of Russia as soon as possible. You can’t blame him.

As a young player, Podkolzin doesn’t get much ice time with his KHL team. There’s likely a spot for him in Vancouver though.

Benning confirmed in an interview with Jon Abbott on TSN 1040 that Podkolzin’s KHL contract expires April 30. The Canucks play four regular-season games in May this season, plus playoffs if all goes well, so there is a chance Podkolzin could make his debut this season. That decision does hinge on not being selected for the IIHF World Championships too though.

#Canucks GM Jim Benning tells @HockeyAbbs these World Junior games will help Podkolzin prepare for the NHL. They hope to sign him to a NHL deal when his KHL deal is done on April 30th.

“We’re gonna wait for his contract to run out, and then he’s free from the KHL. We want to try to talk to his agent and if we can try to get him signed and get him over here… He’s got an NHL body, he’s a big strong kid, his attention to detail is really good. We’re hoping that once we get him signed here that we can get him right into our lineup and see what he can do.”

Until then, it’s Hoglander’s time to shine

Nils Hoglander entered training camp as a long shot to make the team, and maybe he still is. But he’s being put into a position to succeed by head coach Travis Green, who lined the 20-year-old next to Bo Horvat and Tanner Pearson on the first two days of camp.

Here’s a glimpse from Tuesday’s scrimmage, courtesy of Chris Faber:

If you didn’t already know…

Nils Hoglander doesn’t look out of place at all. pic.twitter.com/z0TKQrhnAO

“He’s really fast, shifty, smart with the puck. It was really good to skate with him,” Horvat said of Hoglander on Monday.

Is Hoglander ready for prime time? I have my doubts, though he has looked good in practice. His biggest test will be Wednesday night’s scrimmage.

If Hoglander can play in a top six role already, it’ll be a game-changer for a lineup that has a glaring hole on the second line. The longer Hoglander stays in that spot, the better the odds are that he sticks with the team.

Travis Green’s answer to my question about Baertschi on Sunday didn’t leave me feeling good about his chances of making the team, but he’s still a candidate for that second line right wing spot.

“Sven will come to training camp, and we’ll see where he’s at and where he fits,” said Green. “If he deserves to be on the team, he’ll be on the team.”

I think Baertschi will need to bang down the door to make the roster. This year that means scoring goals, creating chances, and showing determination in all zones.

If I had to put money on it right now, here’s the lineup I would guess the Canucks will start on opening night: