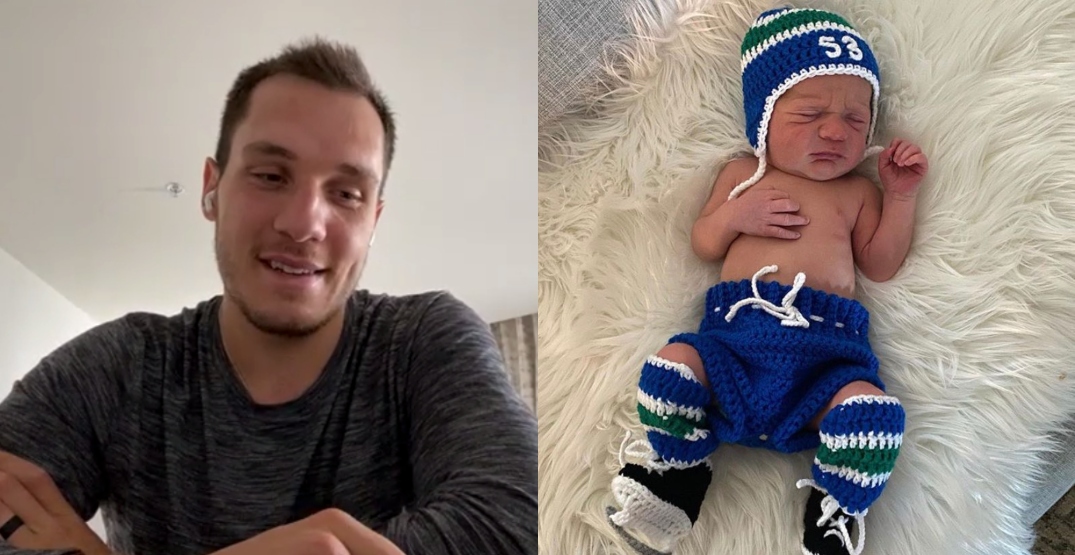 Bo Horvat is back in Vancouver, living a quiet, boring existence in quarantine following the biggest moment of the young Canucks captain’s life.

The 25-year-old recently became a new dad, as his son Gunnar arrived on June 28 — 16 days prior to his due date. That allowed Bo to be by his wife Holly’s side for the birth back in Ontario, which wasn’t a certainty with training camp coming up on Monday.

“I’m happy he came a little earlier and is happy and doing well, and I got to spend the week with him,” said Horvat, speaking to reporters for the first time as a proud papa.

“It was the best week of my life, hands down. Holly and I are really happy to have the little man in our life — he’s been a blessing.”

Now back in Vancouver, quarantining at the JW Marriott hotel when he’s not at Rogers Arena, Horvat has to settle for video calls with Holly and Gunnar.

“I’m not going to lie, it’s not easy to leave your newborn after a week,” Horvat said, knowing that he’ll be away from his family for at least a month.

Though of course if everything goes to plan, he won’t see them for even longer than that.

“Leaving Sunday was probably one of the toughest days I’ve ever had to go through, leaving your family behind. Just not knowing when you’re going to see them again is the biggest thing.

“Hopefully by the end of this I’ll be putting him in the Stanley Cup and everything will be alright.”

Horvat, along with all NHL players, had the option of declining to play this summer without consequence. But the captain said it was never an option for him.

Horvat skated three to four times per week near his offseason home in London, Ontario. He’s now part of one of the groups of about eight players each, but that all changes on Monday.

That’s when “Phase 3” is set to begin in the NHL and when head coach Travis Green will begin putting players through their paces as a group. The plan is for the Canucks to leave for the hub city of Edmonton on July 26, with their best-of-five series against the Minnesota Wild starting as soon as August 1.

The NHL bubble begins for all Canucks players and staff when they get to Edmonton, and despite issues Major League Soccer has had with its bubble in Orlando, Horvat isn’t worried.

Horvat could have avoided the bubble life in Vancouver had he been willing to drive from London, Ontario, though a 47-hour solo trip doesn’t sound much better. All players that stayed in BC, as well as those that drove back from other parts of Canada, have full freedom until the team heads to Edmonton. Micheal Ferland came the longest way to avoid quarantine, as he made the 24-hour drive from Winnipeg.

Calling his quarantine “a little boring,” Horvat said he’s been passing the time by playing cards and watching Netflix when he isn’t talking on the phone with his wife.

Unlike many of the Canucks’ other young players, Horvat has playoff experience, albeit brief five years ago. The 2015 playoffs were a coming out party of sorts for Horvat, a rookie who tied for the team lead in playoff scoring with four points in six games against the Calgary Flames, following 25 points in 68 regular season games that season.

“It was the funnest hockey I’ve ever played… everything about it goes to another level. I find that’s when I play my best hockey, and I can’t wait to get back and playing playoff hockey again.”

Hungry to win after his team has missed the playoffs four straight seasons, Horvat has his sights set on beating the Wild, and making some noise after that.

“At the beginning of the year we set out a goal to make the playoffs and have a chance at the Stanley Cup, and we have that. If I’m going to be away from my family and put my time and effort into coming back and playing in the Stanley Cup playoffs I want to go all the way. I want to try to win this thing, so it’s not just a waste of time.”