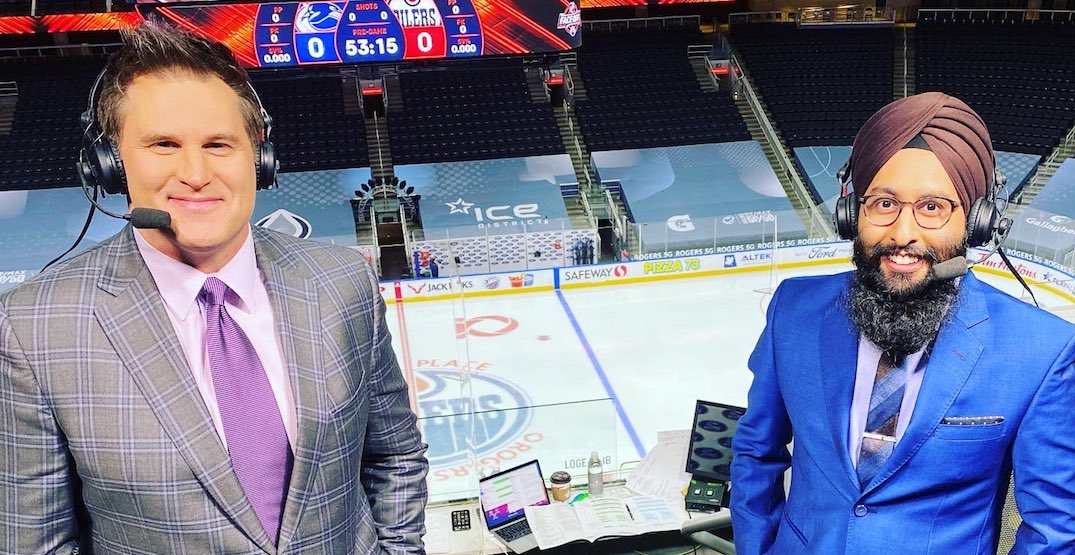 Making his Sportsnet play-by-play debut, Harnarayan Singh made history as the first Sikh broadcaster to call an NHL game in English.

What a night that was! After calling 700 plus games for @HkyNightPunjabi, I did PxP for @sportsnet in English on opening night of the 21’ @nhl season. I wouldn’t be here without the support of so many 🙏🏽 It wasn’t perfect but I look fwd to putting in the work for the game I love! pic.twitter.com/V7tGTSqXLh

Here is a list of things to know about the new Sportsnet commentator that you might not have known:

1. He grew up in small town Alberta

Singh grew up in Brooks, Alberta to parents who immigrated to Canada.

An avid hockey fan all his life, Singh grew up as a big fan of Wayne Gretzky and the Edmonton Oilers.

He leaned on his knowledge of hockey to help him connect with his classmates. During Oilers games, he would like to do mock announcing using a plastic toy microphone with his siblings.

2. He used to pay for his own flights to cover games

In an interview he did with Maclean’s back in 2016, Singh said that when he was starting out with Hockey Night Punjabi, he was told that in order to be a part of the show, he would have to move to Toronto.

However, he never did. He became what he called a “travel expert” as he navigated his way to Toronto to cover games.

“I was the guy you wanted to talk to about flight sales, the best time of day to fly,” Singh said “I had Excel spreadsheets. I was buying tickets months in advance when there was a seat sale.”

He had a travel plan where he would travel from Calgary to Toronto on Saturday mornings, rent a car to travel to the studio and call a couple of Hockey Night Punjabi games, get back to airport at 1 am and wait until 4 am when the gates would open for him to take a return flight.

3. Over 700 games of play-by-play experience

Singh has called over 700 games with Hockey Night Punjabi and produces a weekly segment in Calgary called Flames TV Punjabi.

Checking in with the new guy!

In this edition of #Flames TV Punjabi, @IceSinghHNIC chats with @jleivo17 about his decision to sign in Calgary and his thoughts on the upcoming season! pic.twitter.com/jLgehZPNqd

He previously has worked at CBC where he was a reporter for eight years before transitioning to hockey.

Singh has hosted with Sportsnet several times, becoming the first Sikh person to be part of NHL game coverage (in English) when he worked rink-side for a Calgary Flames and Toronto Maple Leafs matchup in 2016.

Many hockey fans will remember Singh’s viral “BONINO BONINO BONINO” call during the 2016 Stanley Cup Final between the San Jose Sharks and the Pittsburgh Penguins.

This call gave Singh more name recognition as fans and players loved his call and the passion he showed.

Former Penguins defenceman Ben Lovejoy said at the time “The Punjabi call is just spectacular, those guys are outstanding,” according to Sportsnet.

Penguins coach Mike Sullivan also said “We threw them on the game review for our guys to listen to. They got a kick out of it. It’s entertaining, that’s for sure.”

Singh released a book back in fall of 2020 called One Game at a Time, where he talks about his upbringing from small-town Alberta to calling games on a national stage.

Just in time, #OneGameAtATimeBook is now available at your local @costcocanada location for a great price! The book will make for an inspirational #Christmas, #Gurpurab, #Diwali, #Hanukkah, #holiday gift for your family and/or friends! #NationalBestseller #Costco #holidaygifts pic.twitter.com/JHiYXBteH2

6. A recipient of the Meritorious Service Medal

In 2018, Singh was awarded the Meritorious Service Medal by the Governor-General of Canada for his contributions to Canadian society.

The medal was established to recognize remarkable contributions in many different fields of endeavour, from advocacy initiatives and health care services, to research and humanitarian efforts.

7. He is involved in a variety of charity initiatives

Hockey Education Reaching Out Society (HEROS) is a volunteer-driven charity that uses hockey to teach life-skills and empower marginalized youth. Singh has been a member for five years, and since 2000, the charity has helped almost 10,000 boys and girls across Canada.

He is also involved with the NHL and Chevrolet Canada.

The NHL’s Hockey is For Everyone program uses hockey to drive positive social change and foster more inclusive communities. The Chevrolet Good Deeds Cup was created to inspire young Canadians to do good by transforming the positive values learned through hockey with the main goal of developing hockey players on and off the ice.