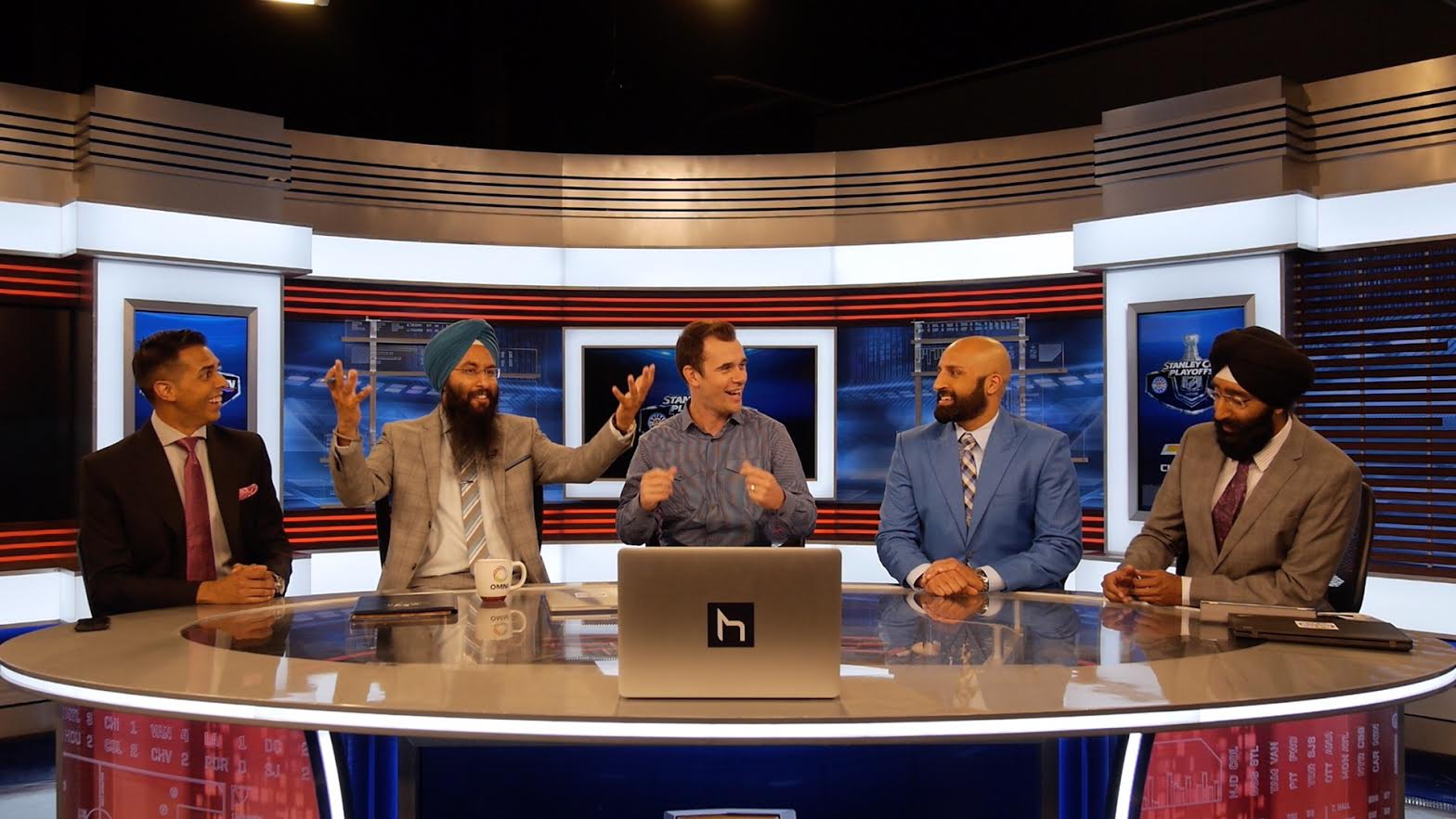 Something special is happening on Hockey Night in Canada broadcasts these days, and it has nothing to do with George Stroumboulopoulos or Don Cherry.

Harnarayan Singh, Randip Janda, Bhupinder Hundal, and Harpreet Pandher are bringing a different twist to Hockey Night in Canada in the Stanley Cup Playoffs, and they’re doing it in Punjabi. Hockey Night in Canada Punjabi Edition has been on the air for eight years, but they’ve never gotten attention like this before.

Since moving to Omni TV two years ago, Hockey Night Punjabi has a bigger budget and a higher profile for their show.

By now you’ve heard the #BONINOBONINOBONINO call, which went viral after Game 1 of the Stanley Cup Final. I spoke to the four broadcasters as they prepared for Game 5 of the Cup Final on Thursday.

Hockey Night Punjabi’s play-by-play man, Harnarayan Singh, was the man who called the Bonino goal. The video of it tweeted out by @HkyNightPunjabi has over 3.3k retweets.

“It’s been amazing,” said colour commentator Randip Janda. “Not only in Canada have we been supported really well, but we’re huge in Pittsburgh. Who thought that would happen? Across the country, across the continent, we’ve received a lot of great feedback.”

The four-man broadcast team calls each game from Don Taylor’s old Sportsnet highlight desk in Vancouver. Producer Nathen Sekhon explained that they pump crowd noise into the ears of the broadcasters to help replicate the atmosphere of the stadium. They even brought in former Canuck Robin Bawa for Game 5 to be interviewed during the broadcast.

The Bonino call is just one highlight in a season of hilarious moments. The team likes to bring a lot of fun and humour to the table, but this isn’t a scripted gimmick.

“Most of our stuff is actually off-the-cuff,” says Harnarayan. “We love our sense of humour and the Punjabi community is very loud, they like their music, they like their food, and they love their humour. So all of us try to incorporate all those characteristics and if one guy takes the music thing, the other guy will take humour angle, we put it all together and obviously provide analysis as well. So you put it all together and I think that’s why the community has come to love it.”

Listening to the broadcast, you might not have guessed that the broadcast team is calling the game in what isn’t their first language.

“It’s been an adjustment, obviously for the four of us,”Harpreet Pandher explains. “We’re all born here in Canada and English is our first language. It’s tricky at first, but now I’m at the point where if I had to call it in English, I’d have trouble with it. Punjabi’s my first language in broadcasting now.”

“Two things are very important that we try to bring to the table, that I think are universal, are energy and intensity.”

When you see highlights of the Punjabi version of Hockey Night in Canada, you’ll notice a number of pop culture references. When Brent Burns opened the scoring on Thursday, Harnarayan made a Simpsons reference, calling “Mr. Burns, excellent!”

One challenge of broadcasting a hockey game in Punjabi is that some words in the hockey vernacular don’t exist in Punjabi. Sometimes they use the English word, as they do for ‘puck’, while other times they find a Punjabi equivalent. Instead of ‘penalty box’, they use words in Punjabi that translate to the more dramatic ‘box of punishment’.

Hockey Night Punjabi has put their own twist on the game and it appears to be resonating within the Punjabi community. People who might otherwise not watch the game are watching Hockey Night in Canada Punjabi Edition on Omni.

“You have three generations of families watching the games together” said Harnarayan. “One of the coolest things now is if you go into a hockey arena, you’ll see Punjabi kids enrolled in minor hockey and a lot of parents tell us it’s because of this show.”