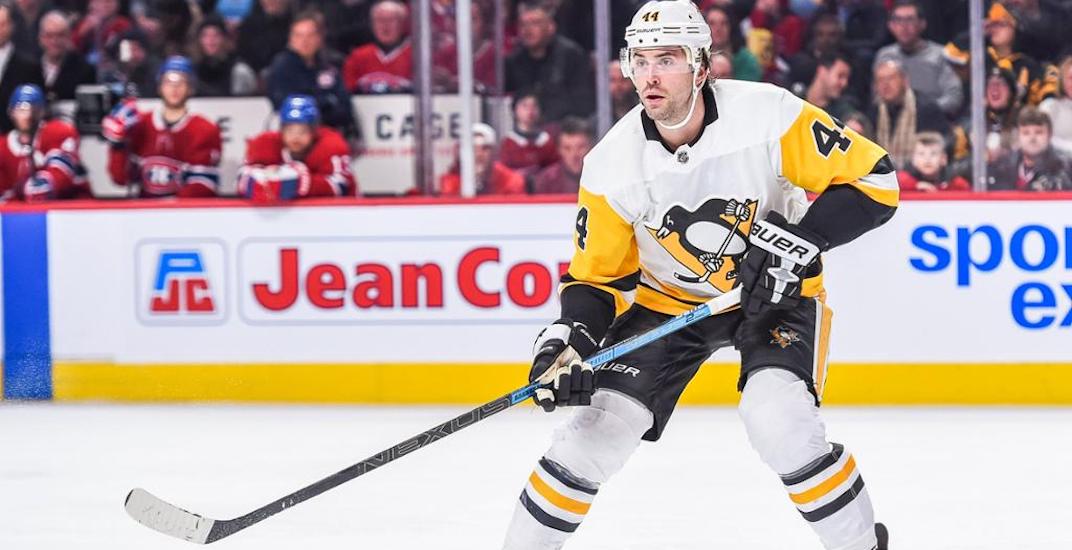 There was reason to believe he was the worst defenceman in the NHL. Now, he’s flourishing on a playoff-bound team. It begs the question, what the heck is going on with Erik Gudbranson?

When Jim Benning traded him to the Pittsburgh Penguins in the dying minutes of trade deadline day, some might have considered it his best move as general manager of the Canucks.

For three years in Vancouver, Gudbranson underwhelmed and got lambasted with scoring chances whenever he was on the ice. Benning gave him the benefit of the doubt during his first two years due to injuries, but while healthy during the 2018-19 season, Gudbranson was at his worst.

At the time he was traded, Gudbranson had the worst scoring chance differential among defencemen to play more than 250 minutes at even-strength. Now? He’s been a steady contributor, playing 19:15 per game in Pittsburgh.

Since the trade, Pittsburgh has gone 10-4-3 with Gudbranson in the lineup. While that’s clearly not all thanks to the Ottawa native (I’m sure Crosby and Malkin did something to help win games as well), he has been receiving high praise in Pittsburgh since the trade.

The impact of Gudbranson’s teammates

One stat that will blow your mind? Gudbranson’s 38.6% scoring-chances-for percentage with the Canucks was the worst among blueliners who played over 250 minutes at even-strength. Now? Gudbranson’s 55.3 SCF% in Pittsburgh trails only the sheltered Zach Trotman among Pens defencemen.

The quickest thing to do would be to credit Gudbranson’s teammates for his success. Despite the jokes about Gudbranson and Jack Johnson potentially forming the worst pairing in hockey, the former Canuck has been playing with impressive rookie Marcus Pettersson.

The pairing of Gudbranson and Pettersson might not be as fast. But man the combined reach is significant #NSHvsPIT

Gudbranson has spent nearly 85% of his even-strength ice time with the 6-foot-3 Pettersson. Their scoring chance differential sits above 56%, despite the slanted defensive zone starts. Gudbranson’s numbers do plummet without Pettersson, but that sample size is so small that it’s hard to analyze seriously.

Even though they do start a number of shifts in the defensive zone, that doesn’t necessarily mean they’re getting all of the tough shutdown matchups. Gudbranson is still just sixth among Pens blueliners in ice time since joining the team in February, meaning he probably isn’t taking on the role of a top shutdown defender.

Now, Petterssons’s underlying numbers have been strong for the Pens all season, so it’s possible that he is propping up Gudbranson. However, it’s more likely that the two have just found chemistry together. That’s something Gudbranson sorely lacked with the Canucks.

In Vancouver, Gudbranson’s only consistent partner was Ben Hutton, and they were an absolute trainwreck together.

So, Gudbranson has looked surprisingly capable at the NHL level, something that seemed farfetched in Vancouver. My first thought when I saw Gudbranson’s gaudy possession numbers, was that he must have spent ample time with Sidney Crosby or Evgeni Malkin on the ice.

The truth? Well, his most common forward linemate has been the defensively porous Phil Kessel (who, by the way, has been struggling mightily on offence too). After that? It goes Teddy Blueger, Nick Bjugstad, and his forever-linked-by-an-infamous-Canucks-trade-partner Jared McCann.

Not exactly a murderers’ row there.

How will defensive logjam affect him?

While most of us expected Gudbranson to flop in Pittsburgh (and rightfully so, based on a dreadful three-year sample size), a change of scenery seems to have done the 27-year-old well in Pennsylvania. Jim Rutherford said as much when asked about Gudbranson in late March.

“Sometimes a player needs a change,” Rutherford told Josh Yohe of The Athletic. “Sometimes he just is going to be more comfortable with another city with another team. It happens. We had felt strongly about him for some time. We always liked him. He’s been very good.”

The fact that he’s been good has been, well, good. However, the Pens do have an impending logjam on defence that will need to be sorted out once everyone is healthy.

Right now, the Pens’ top pairing of Kris Letang and Brian Dumolin are both out with injury. Once Letang and Dumolin return to action, everyone else will get pushed down the depth chart.

So, what does that mean for the Pens’ third pairing of Gudbranson and Pettersson? After his solid showing so far in Pittsburgh, some believe that their spot in the lineup is probably safe.

Best defensive pairings would be

The Penguins already have six defenceman signed for next season, with the cheapest being Jack Johnson at $3.25 million per season.

If Gudbranson keeps up the sturdy defensive play with Pettersson, it’s not implausible to think he bumps someone like Johnson out of the line-up – particularly because the Pens are light on right-handed blueliners.

That’s a quick turnaround for a guy who many believed was the worst defenceman in hockey. Even though the Canucks came out on top by shipping out an underperforming player, Gudbranson does deserve some credit for finding a home on a very good hockey team.