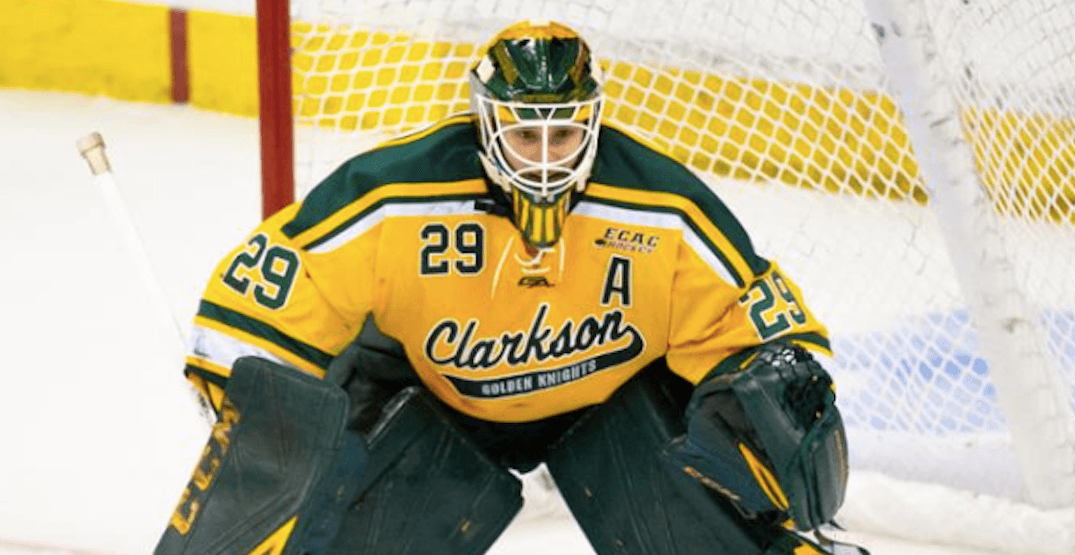 The 22-year-old started 39 games for Clarkson University Golden Knights this season, going 26-11-2 with a .929 save percentage and 1.91 GAA, and his win total ranks second in the nation.

“Jake has had an outstanding collegiate career at Clarkson,” said Benning.

The 6’2″, 201-pound goaltender is a finalist for the 2019 Mike Richter Award, awarded annually to the most outstanding goaltender in NCAA men’s hockey and is the Clarkson Hobey Baker nominee.

He was also recently named a member of the ECAC All-Conference Second Team and was a finalist for the ECAC Goaltender of the Year Award.

In three seasons with Clarkson, the Eden Prairie, MN, native has posted a record of 64-37-13, which ranks fifth in the school’s all-time wins list.

Kielly also leads all active NCAA goaltenders in career shutouts with 16. Prior to his collegiate career, Kielly appeared in 37 regular season games and 11 playoff games for the USHL Tri-City Storm in 2015.16, helping lead the team to the Clark Cup Championship.

Benning said he’s excited to have Kielly join the Canucks organization, “as he’ll add further depth to the goaltending position.”