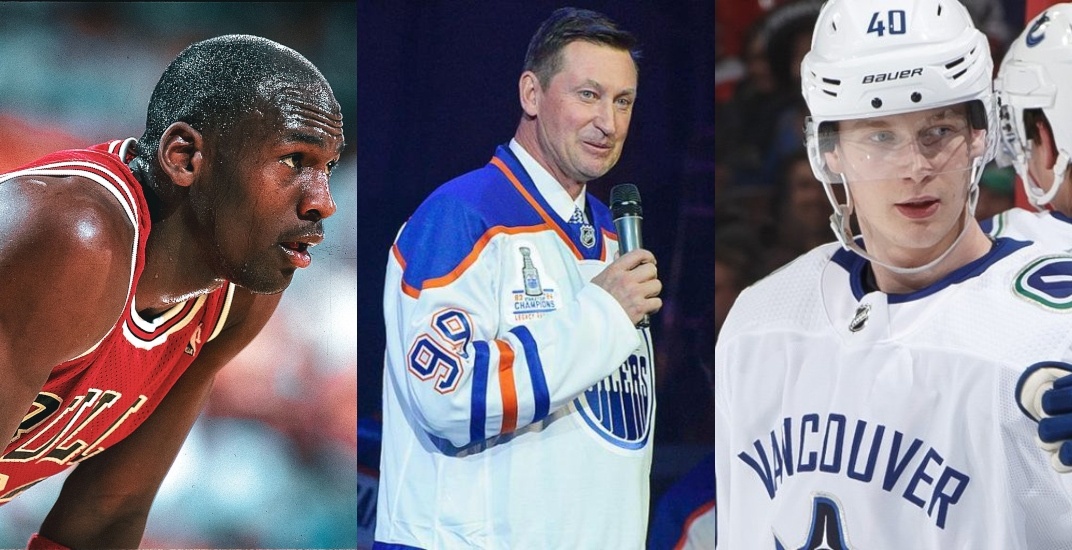 And when the Great One speaks glowingly of Elias Pettersson, Canucks fans get giddy.

Not long after Pettersson’s slap shot goal off the rush drew comparisons to Gretzky, the league’s all-time leading scorer did little to slow the hype machine.

“From my point of view, [Pettersson has] a lot of my similarities,” Gretzky said on Sportsnet 650 radio back in November. “Obviously his hockey sense and his playmaking ability is as good as anybody right now. That’s probably where the comparisons come from. Much more the playmaking than anything else.”

Gretzky took it a step further this week in an interview with Swedish newspaper Expressen.

“We always compare athletes with each other and if anyone reminds me of myself, it is Elias Pettersson. For several reasons,” Gretzky said (translated with the help of Google Translate).

“Firstly, he may not be the best skater or have the hardest shot, he is not the biggest player, but he sees the ice as well. He has a great understanding of the game, but the most important part is his work ethic. If you look at him and he loses the puck, he stays and immediately makes an attempt to win it back.

“Many young players make an extra turn and take some time to do so, but not Elias. He’s right there and is fighting for the puck again.”

Pettersson drew headlines for his stickhandling and goal-scoring ability, but those that watched him closely will agree with Gretzky. The young Swede was as competitive as anyone on his team and had great attention to detail in all facets of the game.

“When it comes to his shot, it’s harder than people think,” added Gretzky. “I’ve seen him score this season, where I tell myself, ‘Wow, that was a really hard shot.'”

“Elias is one of the talents that impressed me most in recent years. Yes, you have to go back a long time to see something similar in the NHL.”

Pettersson has been compared to Gretzky, Pavel Datsyuk, and Henrik Sedin, among others. But until now, the comparisons have been confined to the sport of hockey.

When asked if Pettersson is a “franchise player,” Gretzky had an interesting answer.

“I compared him a little with Michael Jordan when he came to the Chicago Bulls,” said Gretzky. “Jordan went third in the NBA Draft and Elias was not the number one pick when he was drafted either.”

Jordan, who was famously drafted after Hakeem Olajuwon and Sam Bowie in 1984, went on to become arguably the greatest basketball player of all-time — so maybe the comparison is a little unfair. But, like Jordan, Pettersson appears to be the best player from his draft class — despite being taken fifth overall.

With 66 points in his rookie year, Pettersson bettered each of 2017 No. 1 overall pick Nico Hischier’s seasons (52 and 47 points, respectively). Pettersson has more points in one season than Nolan Patrick, who was taken second, scored in two years combined.

“Sometimes it happens for some reason we can’t predict, but this guy (Pettersson) is a franchise player.

“He works hard and he is so selfless. It’s fun to see him play. I sit there in front of the TV and hope he will score that fourth, fifth, or sixth point in the game.