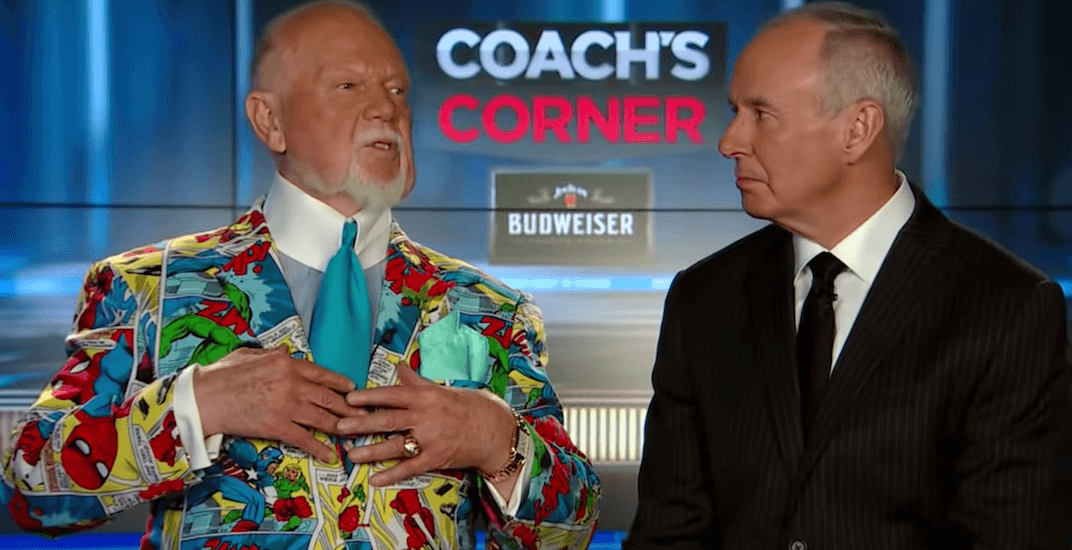 Don Cherry doesn’t get a vote, but if he did, he would not be picking Elias Pettersson for Rookie of the Year in the NHL this season.

While there is certainly competition for the Calder Trophy, Canucks fans weren’t pleased with Cherry’s assertion.

Don Cherry calling for Binnington to be Rookie of the Year #NHLPlayoffs pic.twitter.com/xj5ueINVDp

Get Don Cherry off of TV. His suits are terrible & his takes are worse. Cue my Canucks homer take. The idea Binnington gets the Calder over Pettersson is laughable. His impact was big but the team was playing well before he arrived. Petey carried an AHL team on his back at 19-20.

when don cherry says Binnington should be rookie of the year.

Luckily, Ron MacLean was there to try to set him straight.

“[Binnington] can’t be Rookie of the Year, because he didn’t play enough,” said MacLean, pointing out that the goaltender appeared in just 32 NHL games during the regular season. “Elias Pettersson’s going to win the Rookie of the Year.”

As upset as some may be with Cherry for this take, he likely won’t be alone in picking Binnington for the Calder Trophy.

This, despite the fact that Pettersson was spectacular during the first half of the regular season, when Binnington was still playing AHL games. Binnington has been the league’s best rookie in the second half of the year, helping to save the Blues’ season with a 24-5-1 record and a .927 save percentage.

But Pettersson didn’t have a disastrous second half, he merely had a good second half. He still led all rookies in scoring after January 1 – around the time Binnington took over the Blues’ net.

The Canucks’ first-year player still went on to lead his team in scoring and finished 20 points ahead of the next closest rookie.

But recency bias has set in, causing a number of fans and media to look for players other than Pettersson to give the award to.

People have made a case for defencemen Rasmus Dahlin and Miro Heiskanen too.

But the award is supposed to be for the regular season – the entirety of it. Pettersson, who was getting Hart Trophy consideration in the first half of the season, wound up with 66 points in 71 games on a terrible Canucks team.

In short, he had the best season and still deserves the award.

And after seeing Cherry argue against it, now Canucks fans know they’re right.