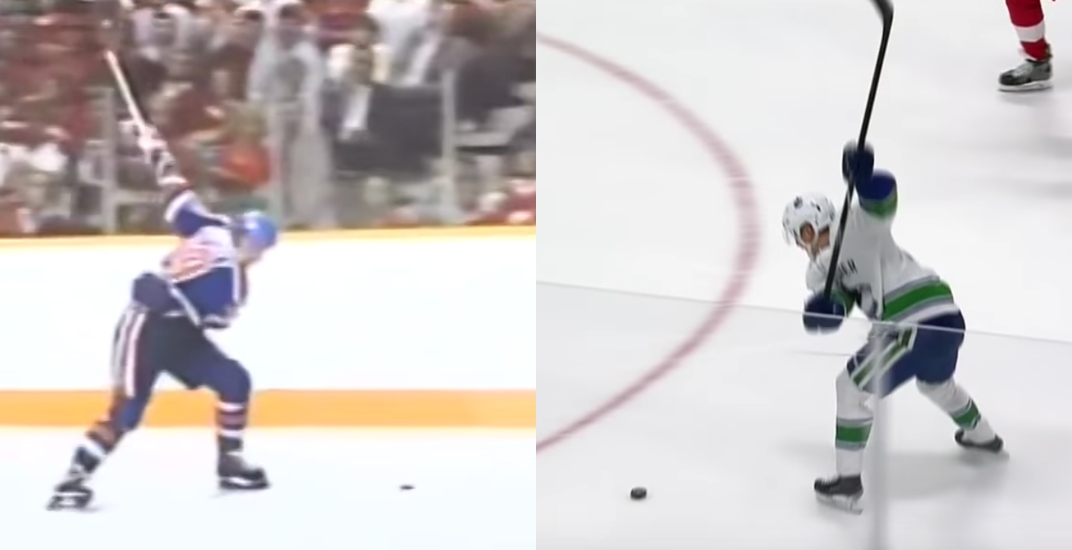 Elias Pettersson continues to amaze everyone watching the Vancouver Canucks play this season.

Coming off a five-point night, which included a Sedin-esque bank pass to Brock Boeser, Pettersson provided some more magic on Tuesday on the road against the Detroit Red Wings.

The 19-year-old scored again, becoming the youngest player in NHL history to score 10 goals in his first 10 games.

Picking up a pass from teammate Loui Eriksson, Pettersson glided down the left wing before beating Red Wings goaltender Jimmy Howard with a perfect slap shot to the top corner of the net, ringing off the post and in.

The stakes were a lot lower and of course they’re different players, but the goal was reminiscent of a famous Wayne Gretzky goal. Gretzky scored with similar flare in Game 2 of the Smythe Division Final in 1988.

The goal was scored shorthanded in overtime, giving the Edmonton Oilers a 2-0 series lead over the Calgary Flames:

Shades of Gretzky? You decide. 🤔 pic.twitter.com/VMEOs8GZzJ

The Canucks outshot the Red Wings 42-30 and probably deserved to win, but lost 3-2 in a shootout. Pettersson played big minutes, seeing 22:11 of ice time (second only to Bo Horvat, who played 23:53, among Canucks forwards), and had five shots on goal.

Pettersson had a glorious chance to win the game in overtime, but hit the post on a two-on-one.

Pettey was SO CLOSE to ending it in overtime… pic.twitter.com/hD1HUb93rb

He was the Canucks’ first shooter in the shootout, but lost control of the puck.

I guess he may be human after all.

The second game of Vancouver’s six-game road trip is on Thursday in Boston.