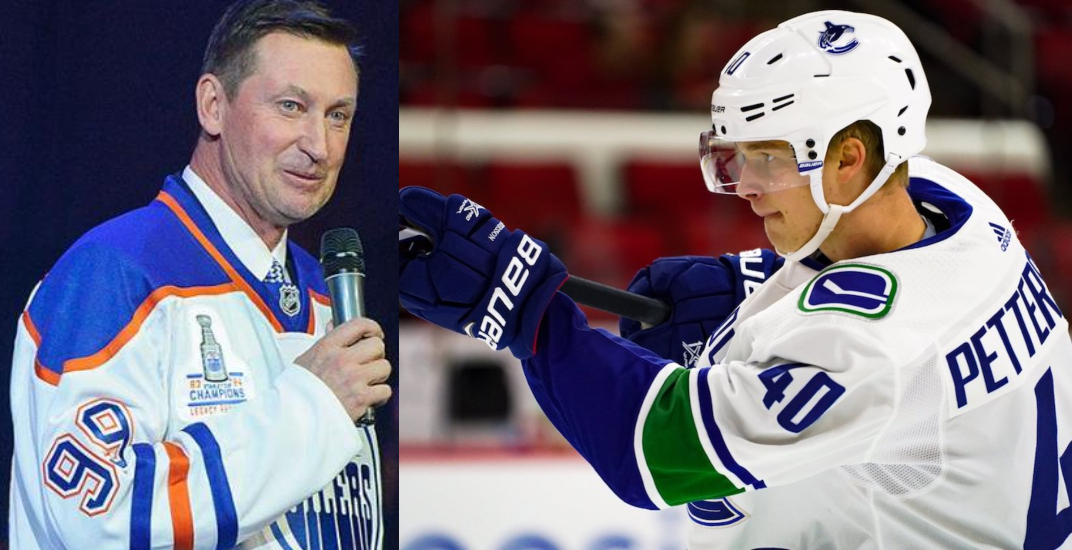 Since suiting up for his first NHL game last month, Elias Pettersson has not only been the talk of Vancouver, but the talk of the league.

The Canucks rookie, who celebrated his 20th birthday on Monday, has had an exceptional start to his career. Scoring 10 goals in his first 10 games, he had fans and media alike wondering just how good he could be one day.

He’s already drawn comparisons to a number of players, including Henrik Sedin, Pavel Datsyuk, and the greatest player of all-time, Wayne Gretzky.

Juxtaposing anyone to the Great One is totally unfair, but that doesn’t mean people are about to stop doing it, especially when Pettersson recreated one of Gretzky’s most famous goals just last week.

Some have even began calling him the Swedish Gretzky.

And now, you can count Gretzky himself among the people weighing in on the topic. Gretzky didn’t shy away from the comparison when asked about Pettersson in a recent interview on Sportsnet 650.

“From my point of view, [Pettersson has] a lot of my similarities,” Gretzky told Sportsnet 650’s James Cybulski, Perry Solkowski, and Rick Dhaliwal on Monday. “Obviously his hockey sense and his playmaking ability is as good as anybody right now. That’s probably where the comparisons come from. Much more the playmaking than anything else.”

Gretzky has more assists than anyone in NHL history has points, so to compare his playmaking ability is a compliment of the highest order. Good on Gretzky for embracing the fun of debating these sorts of topics, but Pettersson has long way to go before he matches his career goal or point totals.

Whether you agree with the comparison or not, it is exciting for Canucks fans to hear people outside of Vancouver glow about their young superstar.

“To see this young man come in and excite the crowd and put on a show every night for the people of Vancouver and the Canuck fans is nothing but a positive for our game,” Gretzky added. “I’ve had the chance to see him a couple of times on TV. He’s fun to watch and he plays with a great deal of passion and energy.”

Pettersson has 17 points (10-7-17) in 13 games, which is actually ahead of Gretzky’s pace (16 points in 13 games) to start his first NHL season with the Edmonton Oilers in 1979. Gretzky went on to tie Marcel Dionne for the league-lead in points (137) that season. Canucks fans would take that in an instant.

“It’s exactly what the people of Vancouver needed to move on after the Sedin era,” Gretzky continued. “Obviously [Pettersson has] been a godsend for the coaching staff there because he’s very coachable and he’s done a lot of good things for that organization already in this short time.”

Gretzky hit the nail on the head there, though I’d argue he’s been a godsend to more than just the coaching staff.