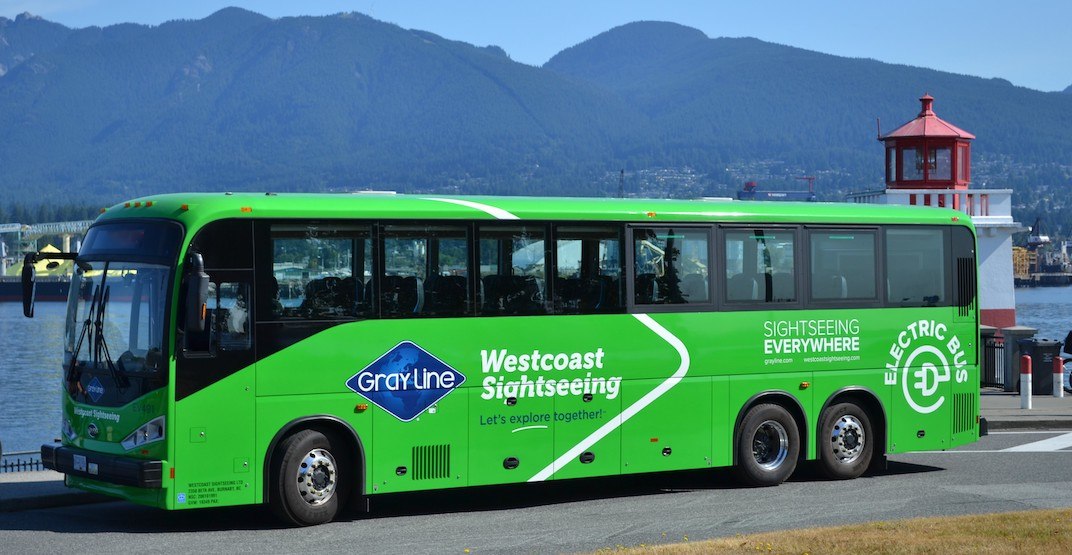 The first two of these buses — the C9 bus model from China-based manufacturer BYD — have already arrived, with features such as seatbelts, USB ports at each seat, air-conditioned windows to help ensure visibility during various weather conditions, leather seats with ample legroom, and custom audio to help guests hear their guide.

These 45-ft-long, zero-emission buses use clean iron-phosphate battery technology, providing a range of over 300 km on a single charge, with a full recharge within four hours.

“We are committed to pioneering our sector into the clean economy to demonstrate this can and should be done to maintain and even improve the air quality and livability of our beautiful city and region,” said Robert Safrata, CEO of Changequity, the umbrella company of Gray Line Westcoast Sightseeing and NOVEX Couriers, in a statement.

With the retirement of older buses, Gray Line will eventually have an exclusive fleet of electric-battery vehicles. However, the company does not have a timeline for the rollout of a complete fleet of electric-battery vehicles due to a lack of charging stations for buses in strategic areas, including downtown Vancouver and along the Sea-to-Sky Corridor.

The buses are intended to be used for itineraries within Vancouver, southwestern BC, and travel to Whistler, Victoria, the North Shore. This includes the daily Hop-On and Hop-Off tours in both Vancouver and Victoria.

“At this time, the lack of existing charging infrastructure and funding for new infrastructure creates a challenge for full fleet conversion,” continued Safrata. “We are working with various levels of government, BC Hydro, industry partners and other entities to help find an efficient, cost-effective path to create infrastructure, which considers cost, location and space for buses, and the overall power grid.”

Earlier this year, Landsea Tours & Adventures also changed up its fleet, with the introduction of new modern double-decker tour buses for its Hop-On and Hop-Off tours.