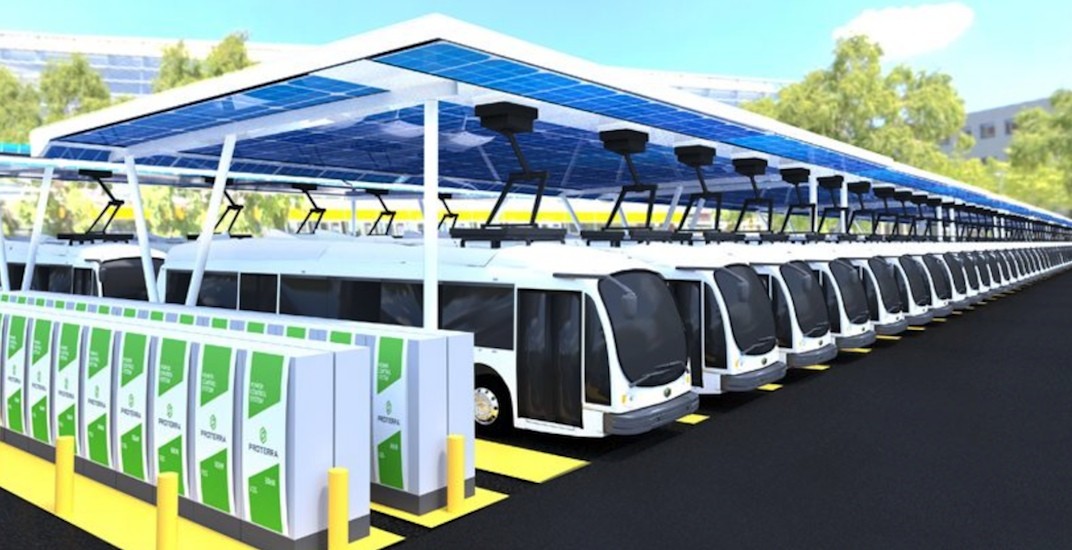 Artistic rendering of an example of a mass electric bus charging station. (Proterra)

Metro Vancouver’s public transit authority is planning ahead for an even greener future, and it plans to accomplish this by switching its fuel sources for its bus fleets.

TransLink’s Mayors’ Council is expected to approve a plan in a meeting today that reduces its GHG emissions by 2050 and completely switches its operational fuels to renewable energy sources by 2050, with interim targets set for 2030 and 2040.

“Our facilities would be primarily powered by electricity, and where required, by renewable natural gas. New buildings would be designed and built to be near zero GHG emissions, and building scale renewable energy, such as solar photovoltaic panels could be utilized. This is an ambitious target; however, we have the next 32 years to plan and execute accordingly and transition away from fossil fuels.”

According to a report, this emissions target can only be accomplished by significantly electrifying the bus fleet.

The opportunity of acquiring new battery-electric buses to replace fossil fuel-powered buses is highlighted, as many of these buses will reach the end of their life cycle over the coming years.

The report also poses the question of whether the trolley buses, which mainly run within the city of Vancouver, should be replaced with battery-electric buses. Vancouver’s current trolley fleet went into service between 2005 and 2007, and they will need to be replaced by around 2028. 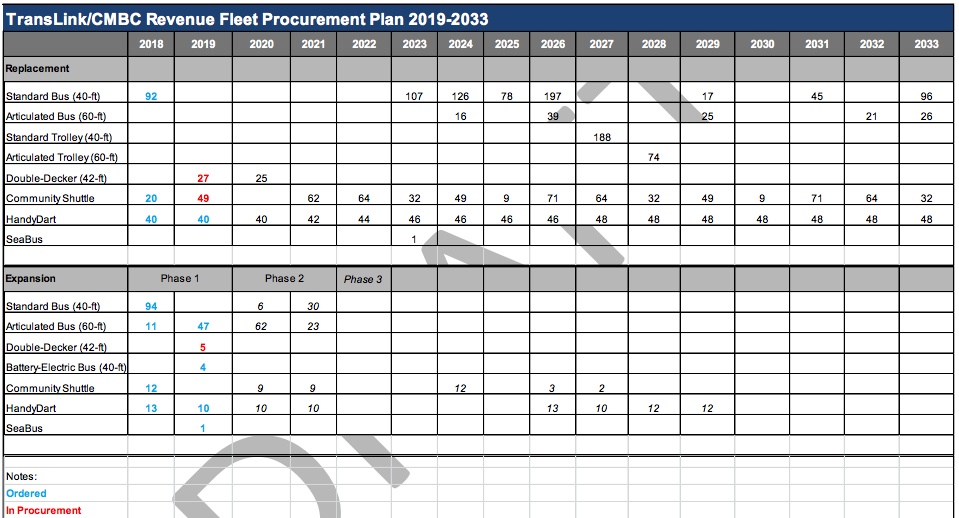 TransLink’s draft long-term bus fleet renewal plan. Click on the image for an enlarged version of this chart. (TransLink)

However, it is estimated that significant infrastructure investments of between $250 million and $780 million, depending on the electrification scenario, would be required – such as new charging infrastructure and changes to bus operations.

“The life-cycle fleet costs for electrification over the next 30 years are projected to be marginally less expensive compared to diesel primarily because of fuel cost savings,” continues the report.

In the meantime, other cleaner fuel sources such as natural gas will enable a transition towards the emissions targets. A fleet order of 106 compressed natural gas (CNG) buses began arriving earlier this year, adding to the existing CNG fleet of 146 buses.

Next year, TransLink will launch a 2.5-year-long pilot project of running four fast-charging battery-electric buses for bus route No. 100 travelling along Marine Drive through Vancouver, Burnaby, and New Westminster.