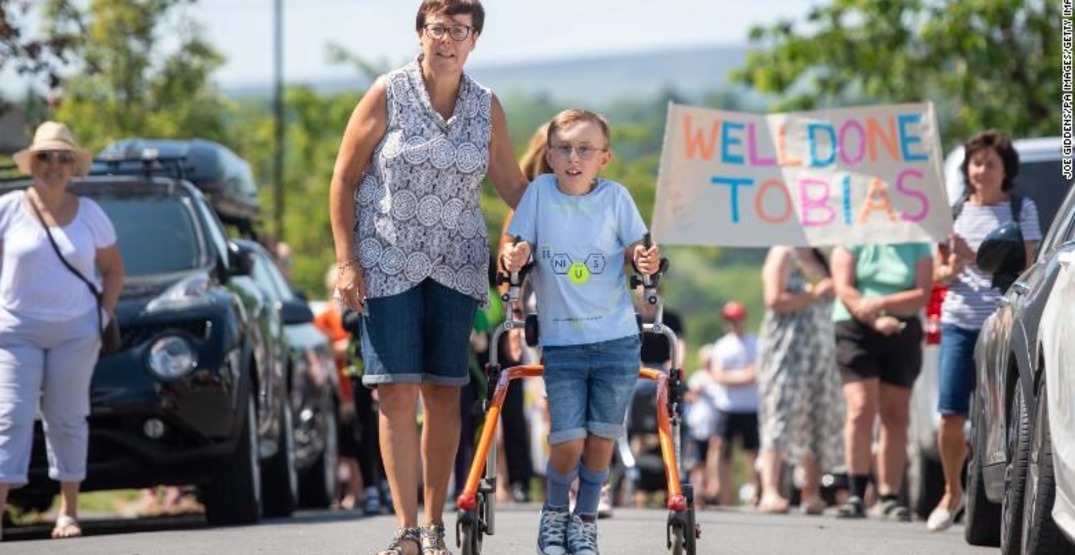 So, we decided to step in and help them out to give them a fairy tale wedding, with a Rays twist 💙 pic.twitter.com/hvhtssW8qe

Ashley and Ron had to cancel their wedding due to various restrictions and safety precautions put in place. However, Major League Baseball team the Tampa Bay Rays decided to take matters into their own hands and give them the wedding of their dreams, “with a Rays twist.”

Jorge Rodriguez-Gerada, an artist in New York City, channelled his talents to transform a regular parking lot into an extraordinary piece of art and touching tribute. The purpose of the work was to express appreciation for the dedicated and compassionate frontline workers. Rodriguez-Gerada did so by creating a portrait to honour the memory of Dr. Decoo, a Latino physician who passed away while combating the global pandemic in New York. The piece also pays homage to the African American and Hispanic communities who are “disproportionally affected.”

Tobias Weller, a nine-year-old boy with Cerebral Palsy and Autism in Sheffield in northern England, was inspired by the actions of Captain Sir Thomas Moore, a 100-year-old man who raised over £30 million for the National Health Service by walking. Weller’s goal was to raise £30,000 for his two favourite charities, the Sheffield Children’s Hospital and Paces School, by walking a marathon on his walker. On Sunday he succeeded, and his JustGiving page has surpassed his original goal. Right now, he has raised over £100,000.

Māori haka went on in the new zealand black lives matter protest and i couldn’t be more proud of my country 💖 pic.twitter.com/eYAQ5Mes5r

Individuals participating in a protest against racial injustice in New Zealand performed the haka, a ceremonial dance in the Māori culture reserved for representing strength, unity, and pride. This gesture is a symbol of honour and was used to convey respect and support for those continuing to raise their voices around the world.

This town in the United States elected its first Black mayor

Ella Jones has been elected as the first Black and first female Mayor of Ferguson, Missouri, defeating her opponent, Heather Robinett, with 54% of the vote to Robinett’s 46%. Jones received congratulations from two large political figures in the United States, Hilary Clinton and Barack Obama, who both celebrated her victory.