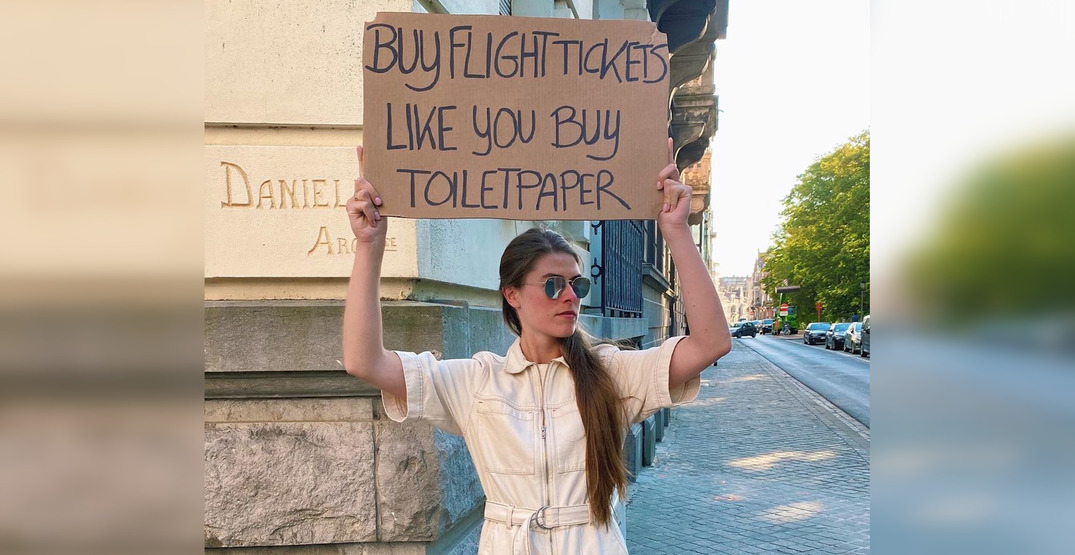 Two pilots have taken to social media to encourage users to “buy airline tickets like you bought toilet paper,” and they’re doing so in the iconic style of digital influencer Seth Phillips, more widely known as @dudewithasign.

Charlotte Dielman, known on social media as @pilotcharlotte, is a flight instructor and commercial pilot who has posted multiple pictures on Instagram proudly displaying her stance on what others can do to help the aviation industry.

She first posted a photo of herself holding a sign that said “I’d rather be flying,” with the same indifferent expression that has come to be expected from Phillips in his posts.

A couple of weeks after her initial message, Dielman posted another image of herself holding a sign that stated, “Buy flight tickets like you buy toilet paper,” encouraging her followers to #supportaviation and that we’re #inthistogether.

Dielman’s posts motivated another pilot in the industry to issue a call to action as well.

Chris Pohl, known on social media as @captainchris, is a captain, instructor, and examiner at Virgin Atlantic. Upon seeing Dielman’s posts, he was compelled to make his own.

Pohl, dressed to the nines in his pilot uniform, posted an image of himself holding a sign that read, “buy airline tickets like you bought toilet paper” as rolls seemingly rain from above.

“Imitation is the sincerest form of flattery,” he wrote in the description. “I have been following @dudewithsign since I started on Instagram, and I saw @pilotcharlotte posted a similar message. I put them together to make my own version.”

In his caption, Pohl encourages his followers to reshare the image with everyone they know, stating that it is essential for the world to start booking flights to ensure that airlines can fill their aircraft and fly again.

“The only thing holding us back is you, our loyal customers/passengers, without you, we’re grounded,” he explains. “Let’s get the world flying again.”

Dielman recently posted another photo of herself holding a sign that says, “Holidays for you are jobs kept from my view.”

Right now, the world is in an awkward position as some countries are gradually beginning to reopen their borders and institute plans to welcome back international travellers. The COVID-19 pandemic has had a substantial impact on the travel and tourism industry, significantly on the aviation industry, with some airlines even going bankrupt due to the losses incurred from the pandemic.

While some locations still discourage non-essential travel, others that are reliant on the industry for their economies are choosing to take a calculated risk by welcoming travellers back. Ultimately, it is best to approach travel plans with caution and follow the health and safety protocols defined by the official government and health authorities at your point of origin as well as your destination.