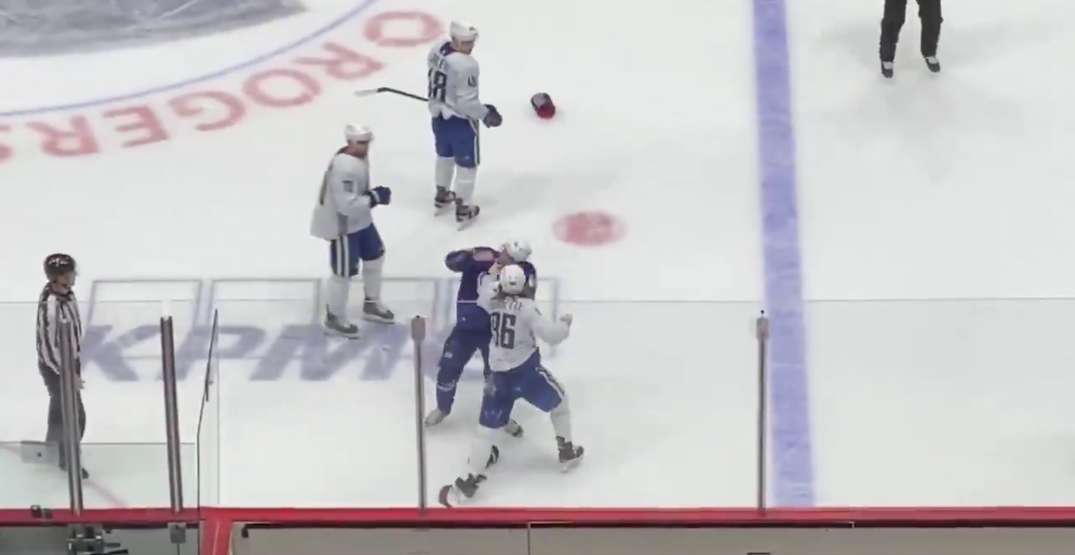 It was a spirited affair on Saturday night at Rogers Arena.

The final full Canucks scrimmage before Wednesday’s season opener in Edmonton had nearly as many fights as goals. That may have been commonplace in the 1970s, 1980s or even the 1990s, but in 2021?

Making matters stranger, the fight was between two players who are assured spots on the team — Adam Gaudette and Tyler Motte.

Motte appeared to slew-foot Gaudette, with both players falling dangerously backwards to the ice. Gaudette wasn’t pleased, getting up before both players dropped the gloves.

Fight?! Motte with a slew foot on Gaudette, before the two #Canucks teammates drop the gloves pic.twitter.com/l3qr4tjmaz

It wasn’t a long fight, but punches were thrown.

Adam Gaudette and Tyler Motte drop the gloves after a questionable play on the boards. pic.twitter.com/DlK8kKD544

That wasn’t the only controversial play Motte was involved in, as he appeared to slew foot Jayce Hawryluk earlier in the game. Hawryluk was injured on the play, and didn’t return.

Jayce Hawryluk injured, play stopped for him and he's gone to the dressing room. Was battling with Motte and ran into Lind. #Canucks pic.twitter.com/7mSkezw3bC

The team didn’t have a scheduled media availability after the game, so we may get some answers about what happened on Sunday.

As for the scrimmage, the game was 1-1 after regulation and overtime, with goals from Justin Bailey and Brandon Sutter. Elias Pettersson scored the only goal in the shootout.

Jake Virtanen hits Jack in his left Rath or his right Bone and the play ends with a Brandon Sutter goal. pic.twitter.com/ckfRr17zYz

Rogers Arena is in the middle of a construction project at the moment, as it appears the team is preparing to put up seat covers around the lower bowl, similar to what was used in the Edmonton and Toronto bubbles last summer.

Rogers Arena is in mid-construction project… #Canucks setting it up for tarps/ads to cover the seats for when the regular season begins? pic.twitter.com/wFccwYflWe

Nils Hoglander had a quieter scrimmage than Wednesday, when the 20-year-old rookie turned heads. He once again played on a line with Bo Horvat and Tanner Pearson, and didn’t look out of place.

Hoglander wasn’t involved in either goal, but did have one good scoring chance that he couldn’t convert. He also had an opportunity to score in the shootout, but was unsuccessful.

It goes without saying in a 1-1 game, but both goaltenders were sharp in this one. Braden Holtby got the win over Thatcher Demko, and it remains to be seen who will ultimately get the start on Wednesday. Both goalies are expected to split time fairly evenly this season.

Travis Green said it was his understanding that Travis Hamonic will be available for Sunday’s practice, after serving a seven-day quarantine upon arrival from Winnipeg. The expectation is that Hamonic will be paired with Quinn Hughes.