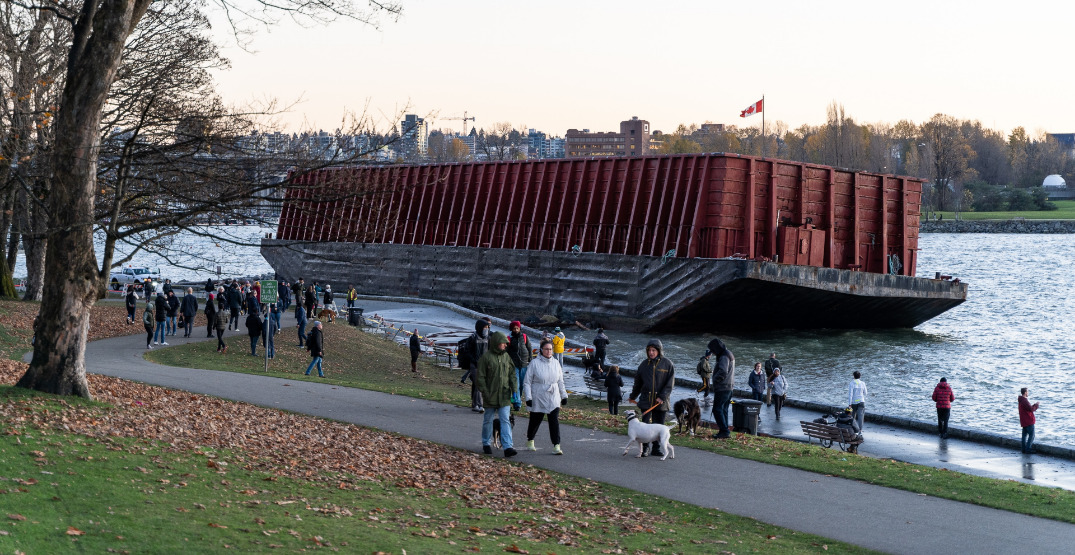 The “free-spirited barge” that washed up along Sunset Beach will remain in Vancouver until Sunday.

At a press conference earlier today, Public Safety Minister Bill Blair suggested the delay of the barge removal was due to the Canadian Coast Guard being tied up with reports of drifting, sunken and beached vessels taking priority.

The barge was initially set to be moved on Thursday.

Transport Canada told Daily Hive that the next attempt to move the barge would be at high tide on Sunday morning. They also said there’s no threat of pollution from the barge.

“Sentry Marine is the owner of the barge. A refloat plan is currently being developed by the owner, and those details will be in place before the barge is moved,” Transport Canada said in an email.

“Once refloat has been successful and the barge stabilized, we will allow the barge to proceed for repairs, and we will follow up with the owner to ensure the vessel is fit for service,” the email continued.

A result of a devastating storm connected to an atmospheric river from which many parts of the province are still reeling, the barge collided with the seawall along Sunset Beach on November 15.

It has since spawned numerous memes and led to the creation of its very own Twitter account.  The profile reads, “I will not be controlled. Free-spirited barge.”