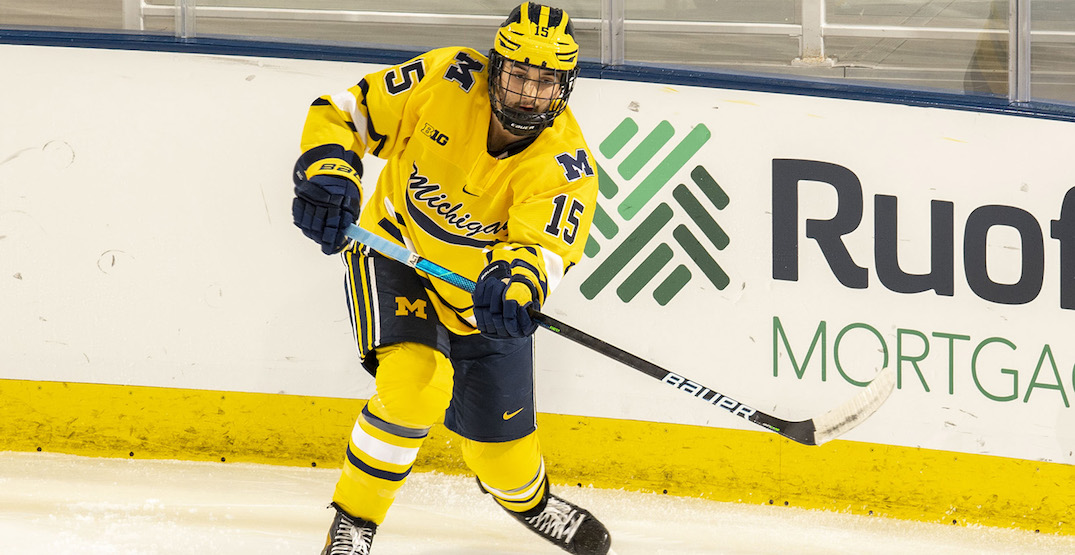 There hasn’t been a whole lot for Vancouver Canucks to get excited about this season.

The Canucks sit last in the Pacific Division with an 8-14-2 record, a slight bump under the expansion Seattle Kraken and well off the pace of the division-leading Edmonton Oilers.

There are a few Canucks prospects that could make fans smile at the World Juniors though, which begins on Boxing Day in Edmonton and Red Deer.

Here’s a look at three Canucks prospects that could play in this year’s tournament.

Jacob Truscott is amidst some stiff competition on Team USA’s blue line, but he’s passed the first test in being named to the group’s National Junior Team Preliminary Roster on Tuesday. He’s one of 10 blueliners to crack the list, which includes three returnees from the American entry that won gold a year ago.

There’s been some growth in Truscott’s game since being selected in the fifth round of the 2020 NHL Draft. He’s already hit a new personal best in NCAA action with Michigan, eclipsing his previous career-high in points through just 16 games.

While Joni Jurmo is not a lock to represent Finland in the tournament, there’s a case to be made for the defenceman who has seen all his action in Liiga play — Finland’s top men’s circuit. He hasn’t exactly faltered either, producing points and skating a regular shift as a 19-year-old.

The sizeable, fleet of foot defender has seven points (1G, 6A) in 23 games and was a part of Finland’s U20 challenge team that played a three-game series against the Czech Republic in November, but was not a member of the U20 team that played in the U20 4 Nations. There’s plenty of competition on the blue line for an underrated Finnish group.

Jurmo emphatically throws the monkey off his back after a beautiful end-to-end goal.

Dmitri Zlodeyev, who has a wealth of experience representing Russia internationally at the Hlinka Gretzky Cup and World Junior A Challenge, has cleared the first hurdle in getting to Alberta. The 19-year-old was named to Russia’s preliminary roster for the World Juniors. The preliminary list consists of only players currently skating in Europe.

Zlodeyev has primarily played in Russia’s junior ranks, but has had some moderate success at the top two levels of the country’s pro circuit, too.

Belarus will not compete against the likes of Canada, Russia, and the United States in Edmonton and Red Deer, but there could still be plenty on the line for prospect Danila Klimovich should he be released to play. Promotion to the main group is on the line at the World Juniors Division 1A tournament in Horsholm, Denmark.

Klimovich is one of two 18-year-olds playing in the American Hockey League this season, and the 2021 World Under-18 Championship standout and Men’s World Championship participant has four points (2G, 2A) in 14 games with the Abbotsford Canucks this season. Klimovich would be the absolute focal point for Belarus’ junior team should the Canucks’ organization send him to participate.

Great pass from Danila Klimovich to set up this goal 🙌 John Stevens buries it to tie the game at 2⃣ for the #AbbotsfordCanucks! pic.twitter.com/xu5JbKMm3v