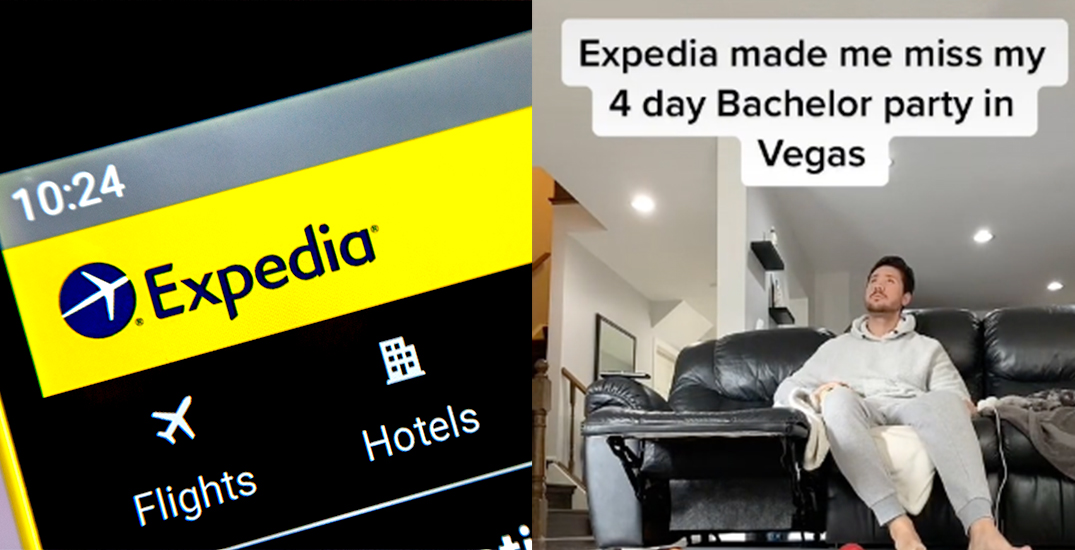 After a Canadian man put Expedia on blast for causing him to miss his bachelor trip, the travel site is making it up to the groom-to-be.

Last week, Stratford, Ontario, resident Zack Kennedy had to painstakingly watch his groomsmen board a flight to his four-day bachelor party in Las Vegas as he stayed behind at Toronto Pearson Airport.

In a TikTok, Kennedy says an error made by the online travel agency was the reason he missed out on his own celebrations.

“My friends and I booked as a group and [Expedia] asked for our first, middle, and last name, totally normal,” explained the groom-to-be. “But somehow in the back end of their system, they removed the space between my middle name and my last name. So, my ticket doesn’t match my passport anymore.”

US Customs requires air passengers to purchase their tickets with the exact same name that appears on their passport or official ID. All travel documents must match that name, and if not, you won’t be allowed to board a flight to the US.

A spokesperson with Expedia Group told Daily Hive in an email on Monday that they have issued a full refund for Kennedy’s original flight.

“We want to apologize to Zack for the negative experience and thank him for bringing this to our attention,” stated Expedia. “Currently, we are still working with the airline to investigate what occurred here.”

Kennedy says the WestJet agent he spoke with told him that Expedia revokes access to airlines so they can’t change passenger info for their own flights.

“People have to call [Expedia] and pay them a whopping $65 per letter,” said Kennedy in the TikTok.

The travel site says the information provided by the agent is incorrect.

“Expedia does not charge $65 per character when a traveller requests a name change on reservations,” stated the spokesperson.

“Any fees incurred by the customer for name changes are set by the airline’s policy, though we do work with the airline to advocate on behalf of our travellers.”

In addition to the refund, the company says it will rebook a “redo bachelor party” for Kennedy and his friends.

“No one should have to miss their own bachelor party and we are already in touch with Zack to work out the details,” said the spokesperson.

Kennedy says Expedia presented him this offer last week, and he’s waiting on the company to confirm details.

“I’m very appreciative to Expedia for acting quickly to make my situation right with their generous offer,” he told Daily Hive.

“With that being said, I eagerly look forward to hearing a more detailed, comprehensive plan on how this and their other existing customer service issues can be addressed.”

The TikToker says that it’s clear this “wasn’t a one-off event” after reading through his comments about other people’s experiences with Expedia.

“I think Expedia’s takeaway from this situation should be that while it’s nice to provide monetary refunds to travellers you can’t refund the memories and experiences that were lost,” he added.

“I understand that it’s impossible to completely eliminate errors like this from occurring, but look forward to learning about the steps Expedia plans to put in place to proactively deal with these unfortunate circumstances.”

Kennedy ended up spending what were supposed to be four festive days in Vegas at home on the couch, drinking shots with his dog, while his friends sent him photos of what could’ve been.

Despite his anger towards Expedia, Kennedy does want to remind people to be kind and patient when speaking with customer service agents for these travel sites.