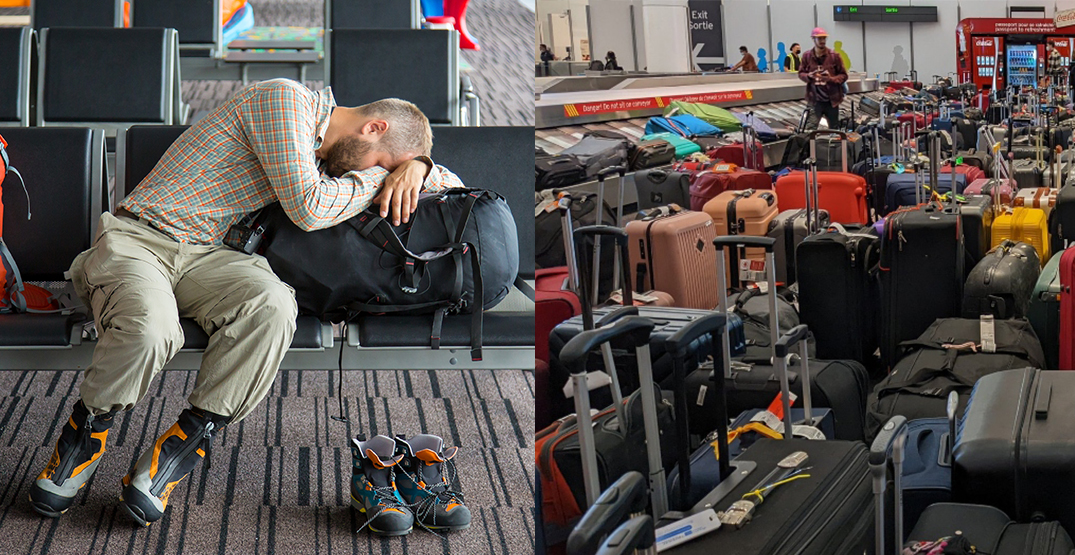 Yes, you have rights as an air traveller!

Whether it has to do with delayed or cancelled flights, or lost luggage, airlines must follow rules set by the Canadian Transportation Agency (CTA) in the Air Passenger Protection Regulations that cover passengers flying to, from and within Canada, including connecting flights.

Daily Hive spoke with two air passenger rights experts about what Canadians should know about their rights and how they can exercise them amidst air travel pandemonium.

Canada has only had Air Passenger Protection Regulations for about three years, so travellers may not be fully aware of their rights, Kristine D’Arbelles, senior director for public affairs at CAA National, told Daily Hive.

She says this may also be the case for people who work at airlines, most of whom are new hires.

“Through no fault of their own, lots of them are getting hired, especially given the issues that are happening right now,” explained D’Arbelles. “The person behind the counter is not necessarily going to know every single detail of the air passengers protection regime in Canada.”

So, D’Arbelles advises that air passengers take notes of everything that happens during their transit in case of any cancellations, delays, or lost luggage:

And the CTA advises you keep copies of:

“You’re going to need all of this information if, in the unfortunate event where something does happen — your bag is lost, your flight is cancelled — you go to the counter and you tell the agent on the other side ‘I do know that I have rights,'” she said.

D’Arbelles says to get all of the information that you can from the agent to start off. From there, according to the CTA, you do need to get in contact with the airline first to resolve any problems.

If you still haven’t received the compensation you believe you should get from the airline after that process, then you file a complaint with the CTA.

#BeInTheKnow When an airline delays or cancels a flight, passenger compensation depends on the level of control that the airline has over the reason for the delay or cancellation. Learn more > https://t.co/ttyFzMYAhl #TravelTips pic.twitter.com/L1P3WsKcBI

Besides investing in an Apple AirTag to keep track of your luggage, the CTA advises passengers to do the following if you plan on checking luggage:

In addition to refunding any fees you had to pay for checking in baggage of any size, weight, or amount, airlines must compensate you up to $2,300 for items if your luggage is lost, damaged, or delayed.

“Say you’re going to a wedding and you need a tuxedo to attend. You can either rent one or easily just buy one if it didn’t arrive, and the airline will have to pay you even if your baggage is delayed only for half a day,” Gabor Lukács, president of the Air Passenger Rights advocacy group told Daily Hive.

You will need to submit a claim in writing to the airline as soon as possible in order to ensure you receive this compensation.

Compensation for cancelled or delayed flights

According to the CTA, if your flight is cancelled or delayed, you could be entitled to the following:

Lukács gives the example of a passenger who’s stuck at the airport overnight due to a flight delay. He says that the airline has to provide meals and cover accommodation.

“Because we are dealing here with cancellation delays within the carrier’s control, they owe passengers lump sum compensation up to $1,000 in cash, depending on how much you’re being delayed at the destination,” he said.

Lukács says you even have a right to decide that you don’t want to travel anymore because of the cancellations or delays. In this case, he says the airline has to give you a full refund in the original form of payment.

Large carriers like Air Canada and WestJet have to give you $400 on top of the refund for foregoing your trip.

Again, you will need to submit a request for compensation in writing to the airline.

“If the airline doesn’t want to pay, it will be a judge ordering the airline to pay the passenger who has to go through the trouble of taking them to small claims court,” he said.

D’Arbelles notes that claims submitted through airlines and the CTA may take some time to be addressed due to backlogs.

Lukács, on the other hand, encourages passengers to go a step further and take airlines to small claims court.

“Airlines are taking advantage of Canadians’ goodwill,” he said. “If airlines treat you very, very poorly, then you shouldn’t treat the airline as you treat a neighbour.”

The air passenger rights advocate says that while protective regulations are there, the laws are not being obeyed by airlines, nor is it being strongly enforced by the government.

“[Airlines] are a large corporation that want to take away your money and give you nothing back in return,” he emphasized.

For prospective travellers who have yet to experience the disorder at airports, D’Arbelles advises to keep CTA’s air passenger protection site bookmarked for reference.