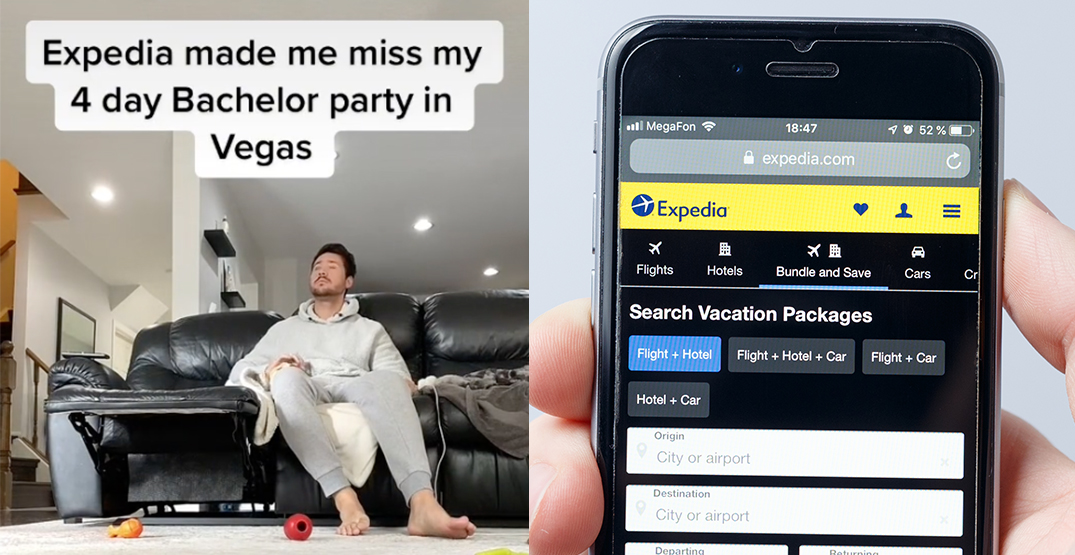 The only thing that stood between a Canadian man and his bachelor party was the space between his middle and last name.

Stratford, Ontario, resident Zack Kennedy had to painstakingly watch his groomsmen board a flight to his four-day bachelor party in Las Vegas as he stayed behind at Toronto Pearson Airport.

In a TikTok, Kennedy says an error made by online travel agency Expedia was the reason he missed out on his own celebrations.

“My friends and I booked as a group and [Expedia] asked for our first, middle and last name, totally normal,” explained the groom-to-be. “But somehow in the back end of their system, they removed the space between my middle name and my last name. So, my ticket doesn’t match my passport anymore.”

US Customs requires air passengers to purchase their tickets with the exact same name that appears on their passport or official ID. All travel documents must match that name, and if not, you won’t be allowed to board a flight to the US.

Kennedy says the WestJet agent he was speaking with told him that Expedia revokes access to airlines so they can’t change passenger info for their own flights. This information is not available on Expedia’s site.

“People have to call [Expedia] and pay them a whopping $65 per letter,” said Kennedy in the TikTok.

Daily Hive has reached out to Expedia for comment. A spokesperson for the travel site said in an email that they are looking into the situation and that these cases take them a few days to review and investigate.

Kennedy told Daily Hive that he received a direct message on Instagram and an email from an Expedia employee saying they wanted to investigate the situation.

“Then 30 minutes later I received another email from the same address saying ‘[Employee Name] would like to recall the message,’ ” the Ontario resident wrote in an email to Daily Hive.

He says he received comments on his TikTok about people who experienced similar situations but were never given a refund.

“I do want my money back, of course, but I’m not holding my breath,” he said.

“Honestly, I think I just want them to apologize to my friend who spent so much time planning what would have been an amazing trip for me, and for Expedia to acknowledge their mistakes publicly because they’re actively ruining what are meant to be lifelong memories for so many people.”

Kennedy and his friends did try to look for other flights, but they knew that “airports are miserable right now” and Kennedy himself was “mentally and emotionally spent” after dealing with the travel chaos.

So, he ended up spending what were supposed to be four festive days in Vegas at home on the couch, drinking shots with his dog, while his friends sent him photos of what could’ve been.

He has also invited his followers to join in a virtual bachelor party of sorts.

Despite his anger towards Expedia, Kennedy does want to remind people to be kind and patient when speaking with customer service agents for these travel sites.

“Please remember, these people aren’t the ones setting these greedy policies. Nobody likes being the person that has to tell someone they can’t go on their vacation, so as much as you can please try to temper your emotions and understand who to truly direct your anger at.”

We will update the story if and when Expedia responds with a statement.