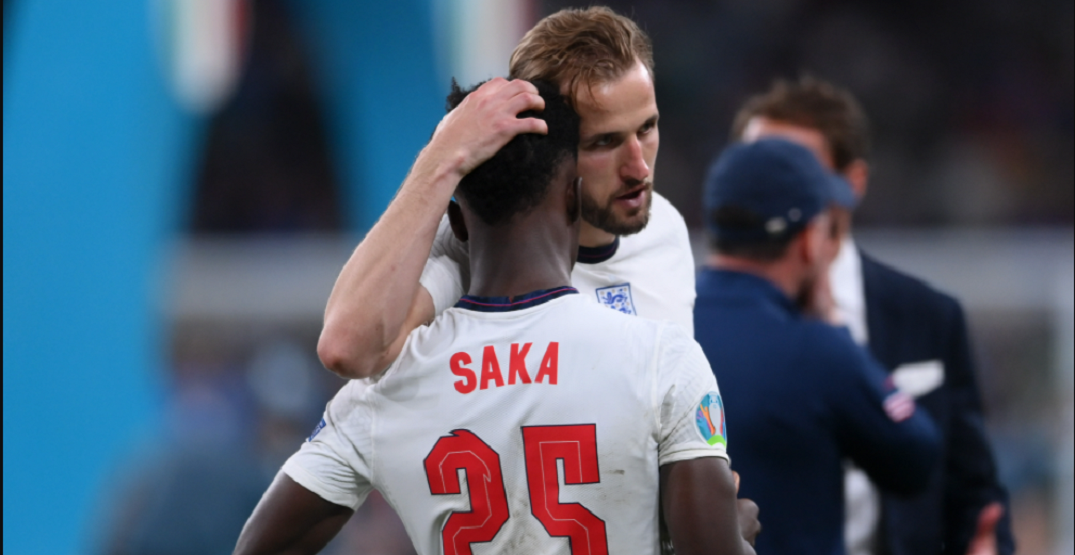 After England lost Sunday’s UEFA Euro 2020 final in a penalty shootout to Italy, a trio of England athletes in particular were subject to racist comments online.

Following the match, all three players received targeted comments on social media. As comments may be deleted or reported, it is hard to tell exactly what the scale of the abuse is.

Saka’s most recent Instagram picture (posted a day before the final) has already amassed over 200,000 comments. In comparison, a picture of him and Sancho from earlier in the week has around 5,000 comments. However, all of the visible top comments are showing support for the 19-year-old player.

England’s Football Association — the governing body for the sport within the country — put out a statement about the abuse.

“The FA strongly condemns all forms of discrimination and is appalled by the online racism that has been aimed at some of our England players on social media,” the FA Spokesperson shared in a statement.

“We could not be clearer that anyone behind such disgusting behaviour is not welcome in following the team. We will do all we can to support the players affected while urging the toughest punishments possible for anyone responsible.”

We’re disgusted that some of our squad – who have given everything for the shirt this summer – have been subjected to discriminatory abuse online after tonight’s game.

We stand with our players ❤️ https://t.co/1Ce48XRHEl

“We’re disgusted that some of our squad – who have given everything for the shirt this summer – have been subjected to discriminatory abuse online after tonight’s game,” the team’s official Twitter account added in a quote tweet.

None of the statements referenced any players in particular.

“We will continue to do everything we can to stamp discrimination out of the game, but we implore government to act quickly and bring in the appropriate legislation so this abuse has real life consequences,” a follow-up statement from the FA added. “Social media companies need to step up and take accountability and action to ban abusers from their platforms, gather evidence that can lead to prosecution and support making their platforms free from this type of abhorrent abuse.”

The UK’s Metropolitan Police announced they were investigating the comments.

But while the FA looks to politicians for help to stop discrimination, some were quick to point that various members of the British government may actually be complicit in enabling the abuse.

In particular, attention was drawn to comments directed at Rashford over the past year by elected officials, who was the spearhead behind a national school lunch program throughout the pandemic.

Rashford began the program in order to combat the British government’s cutting off free lunches during summer months to disadvantaged youth across the UK.

“Political affiliations aside,” a statement from Rashford read last year, “Can we not all agree that no child should be going to bed hungry?”

A leaked text message from Conservative MP Natalie Elphicke that came out Monday allegedly said that Rashford “should have spent more time perfecting his game and less time playing politics.”

What do you make of this message sent by Conservative MP Natalie Elphicke to other MPs about Marcus Rashford's missed penalty?

“I regret messaging privately a rash reaction about Marcus Rashford’s missed penalty and apologise to him for any suggestion that he is not fully focussed on his football,” Elphicke told BBC News.

Former England player and current Sky Sports commentator Gary Neville also raised the issue of England fans booing the pregame taking of the knee in order to show solidarity with the Black Lives Matter movement, which the national team has been doing prior to matches since summer 2020.

The booing was present throughout the tournament, but was most notable prior to Sunday’s final.

Neville referenced Johnson’s lack of a hard stance against those who booed England players throughout the tournament while taking the knee.

“On taking the knee, specifically, the prime minister is more focused on action rather than gestures,” a spokesperson for Johnson said last week when asked about the players taking the knee. “The PM is supporting the England football team and wants them to succeed and wants the whole country to get behind them in that endeavour.”

"It starts at the very top."

“It starts at the very top,” Neville said of Johnson’s role in preventing the abuse of England players.

“I’m reading the breaking news [on the on-screen ticker]. It says the PM condemns racist abuse of England players,” Neville added. “Is that the same prime minister that a few weeks ago…  said it was ok for the population of this country to boo those players who were promoting equality and fighting against racism.”

“For me, I wasn’t surprised in the slightest this morning when I woke up to those headlines, Neville added. “I expected it the moment that the three players who missed, missed.”