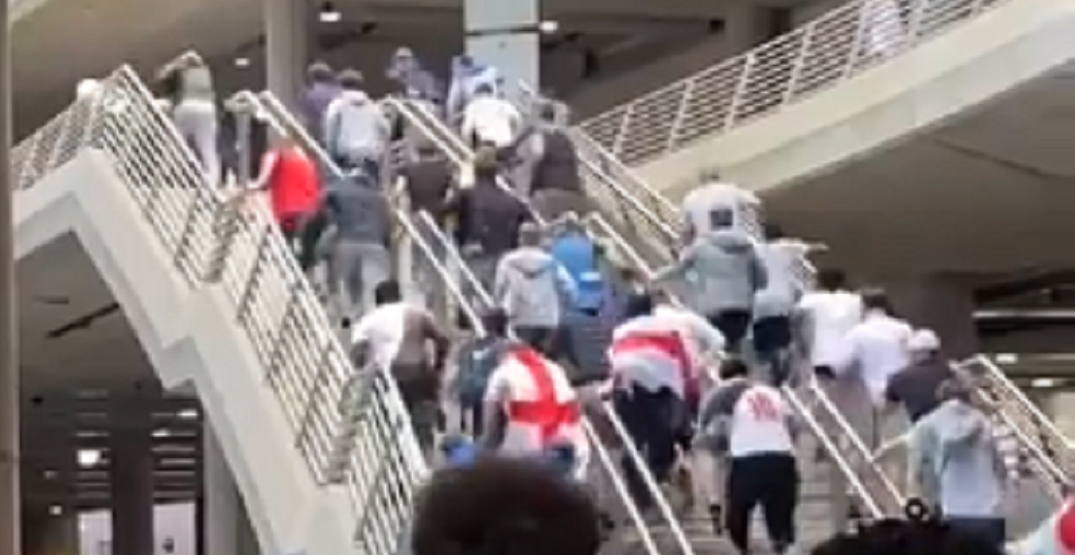 Ahead of Sunday’s UEFA Euro 2020 Final between England and Italy at London’s Wembley Stadium, reports began to come in that hordes of spectators were attempting to enter without a ticket.

Hundreds of fans “barged past security and sprinted towards the turnstiles,” BirminghamLive reporter Ashley Preece stated.

Fans attempt to storm into Wembley Stadium ahead of #Euro2020 Final… 😳😳 [Video by @PreeceObserver] pic.twitter.com/VCeM6aRSdG

Fans, many of whom were carrying England flags and wearing England shirts, attempted their entry through an area usually reserved for the media.

We witnessed this and I stepped away just in time. If this is even crossing your mind, don’t. You don’t get far. Please don’t ruin it for everyone at Wembley. pic.twitter.com/CoNx4U4CHb

A spokesperson for Wembley Stadium told BBC News that “safety measures were quickly activated in the relevant areas,” adding that “there were no security breaches of people without tickets getting inside the stadium.”

Around 60,000 fans are expected in the stadium that would usually be able to fit over 90,000. Capacity has been reduced due to the COVID-19 pandemic, although mask-wearing and social distancing seem to be rather loosely enforced based on the scenes of the tournament.

No international fans have been allowed at any of the Euro 2020 matches.

But it wasn’t just Wembley where fans seemed to be acting up in England.

London’s Leicester Square also saw some bottles being thrown around in a crowd of thousands prior to the match.

England has played five of their previous six matches at Wembley in this year’s tournament, including last week’s 2-1 semifinal win over Denmark in extra time. Italy advanced to the Final with a penalty shootout win over Spain at Wembley last Tuesday.

England has not won a major tournament in men’s soccer since their FIFA World Cup win back in 1966, hosted at a previous version of Wembley Stadium. This iteration of the famed venue saw construction begin in 2002, before being opened to the public in 2007.