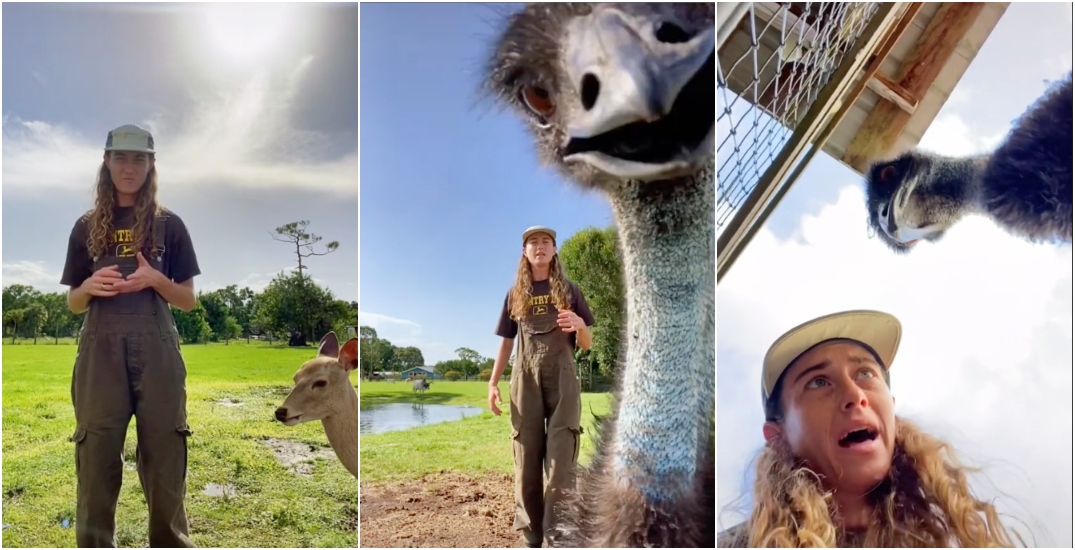 Have you heard of the latest TikTok star? He’s tall, dark, and handsome — at least by bird standards. And he appears to be indifferent to his newfound fame.

The three-minute TikTok video titled “Animals against education, episode 2” features birds and a deer and is basically the 21st-century version of Snow White’s “With a Smile and a Song” — except more chaotic.

As Blake attempts to discuss the animals on the farm, a deer named Princess nonchalantly walks up to her and starts licking her arm. Soon after, Emmanuel’s beak looms into the frame, threatening to peck the phone onto the ground.

“Why would you do that?” a disappointed Blake asks after the phone ends up on the ground facing the sky. “I thought you were better than that.”

“This is Emmanuel & Princess’ account now,” one commenter said.

It’s not the first time Emmanuel has disrupted Blake’s videos.

In another 25-second clip with 2.7 million views, Emmanuel stares curiously at the camera as he and Blake end up in a stand-off.

“Emmanuel, Emmanuel, don’t do it!” warns Blake, knowing the emu’s penchant for knocking over the camera.

“He knew I meant business when I whipped out his government name,” wrote Blake in the caption.

Despite being famous for being a troublemaker, Emmanuel does have a soft side. In another video, Blake explains that after feeding, the large bird waits for her by the gate “to get some snuggles.”

In the comments, Blake said that she grew up with the animals and has taken over from her grandparents to run Knuckle Bump Farms, a small hobby farm in South Florida. In addition to Princess the deer, Emmanuel lives with a mix of other animals: Regina the rhea, Ellen the female emu, Homer the fluffy cow, Gerald the pig, and many more.

When asked about the benefits of having emus on the farm, Blake responds, “Absolutely nothing.”

“So yeah they do nothing and they’re good for nothing but, boy, are they cute,” she says.

“Well, it’s an acquired taste, I guess,” she adds.