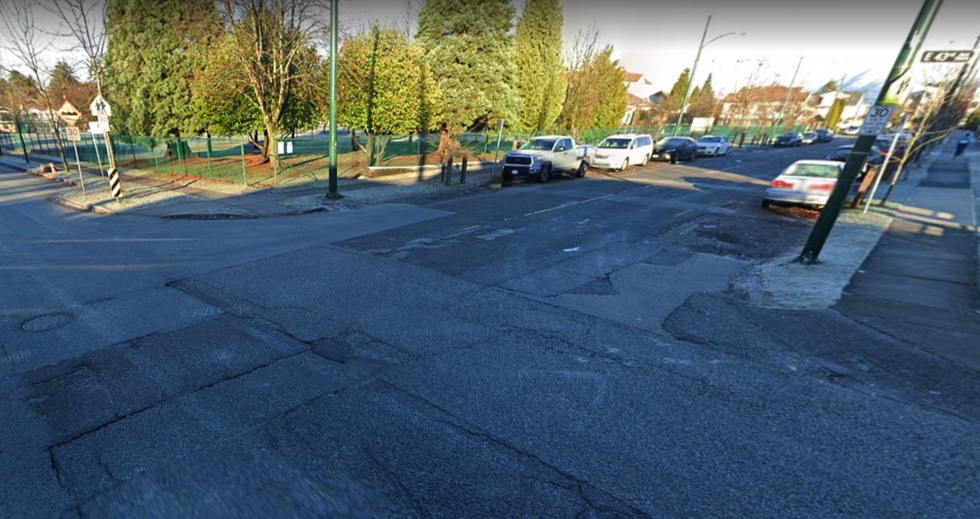 The intersection where a pedestrian was hit by a car. (Google Maps)

Editor’s note: This article links to a picture of an incident which may disturb some readers.

A woman was sent to the hospital after a hit and run incident in East Vancouver on Wednesday afternoon and someone has now been arrested.

It happened around 1pm in a residential area near East 43rd Avenue and Beatrice Street.

A home surveillance camera caught the hit and run, which showed a blue SUV making a left turn, while a woman was crossing the street.

The woman crossing the street was hit by the SUV with extreme force which caused her to hit the ground hard.

After the victim was hit, the driver was seen attempting to drive off, while a bystander attempted to block their exit by standing in front of the vehicle.

The SUV was eventually able to get away and nearly struck a bystander, who was able to record the license plate which the VPD used to track the driver down, and arrest them.

A video of the accident was initially shared on Reddit.

VPD says the file is currently under investigation, and it is unclear what condition the victim is currently in.

The video has now been taken down due to violating Streamable’s terms of service, but a picture of the victim can be seen here.