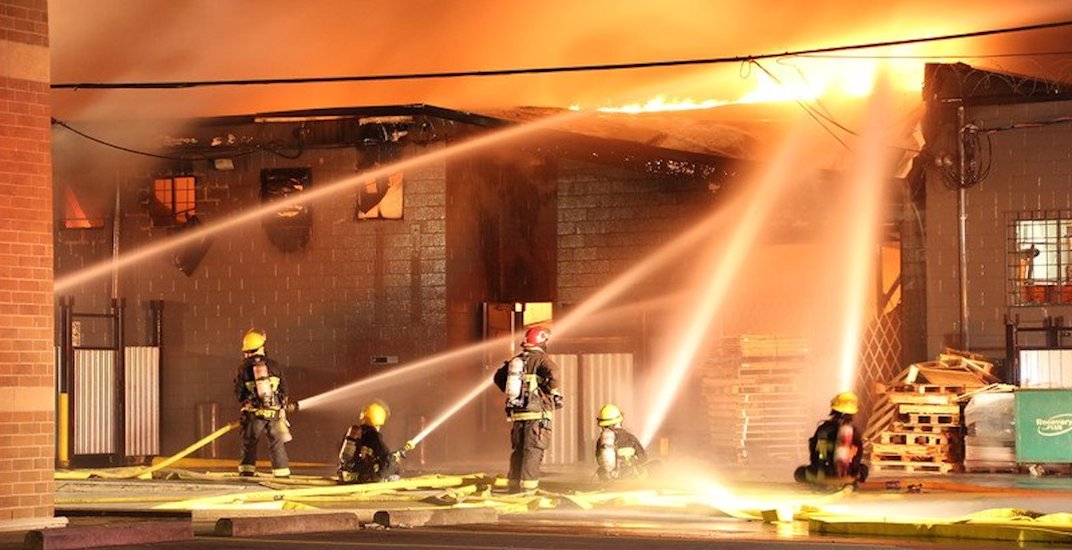 A three-alarm fire engulfed an East Vancouver warehouse Wednesday evening, sending flames and plumes of smoke into the night sky.

The evening blaze took place inside a warehouse that housed a printing company in the area of Pender and Clark.

The fire started around 10 pm and more than 60 firefighters were called in to battle the blaze, which sent thick plumes of smoke and flames shooting into the sky.

The cause of the fire is still unknown.

Photos at the scene of the 3rd alarm in the 1400 blk E Pender St earlier tonight.
60+ firefighters battled the blaze that destroyed a printing company. pic.twitter.com/tzIqkR2WCj

During the fire, residents were warned to shut their windows for the night due to the presence of thick smoke.

Update: numerous reports of strong smoke smell throughout the city from tonight’s 3rd alarm fire at 1400 block of East Pender. Residents should close windows to prevent smoke from getting in. #VancouverFirefighters #WorkingFire #3rdAlarm

What a crazy scene in #eastvan… So intense at 10:39pm this evening… Fire department doing an outstanding job to contain the fire pic.twitter.com/PXbXAwhf5C

Residents reported they could see the flames and smoke as far away as Cambie Street and 8th Avenue.

Is there a #fire in #Vancouver at this time @GlobalBC @vancouverfireBC 8th and Cambie photo and smoky pic.twitter.com/c0WhNyJ9XE

While another resident reported a fairly heavy smell of smoke near 16th and Oak.

Fairly heavy smell of smoke here at 16th and Oak. Worried the fire alarms in my suite will go off (along with me and my cat breathing it). Hoping this will go away as the fire is being dealt with.