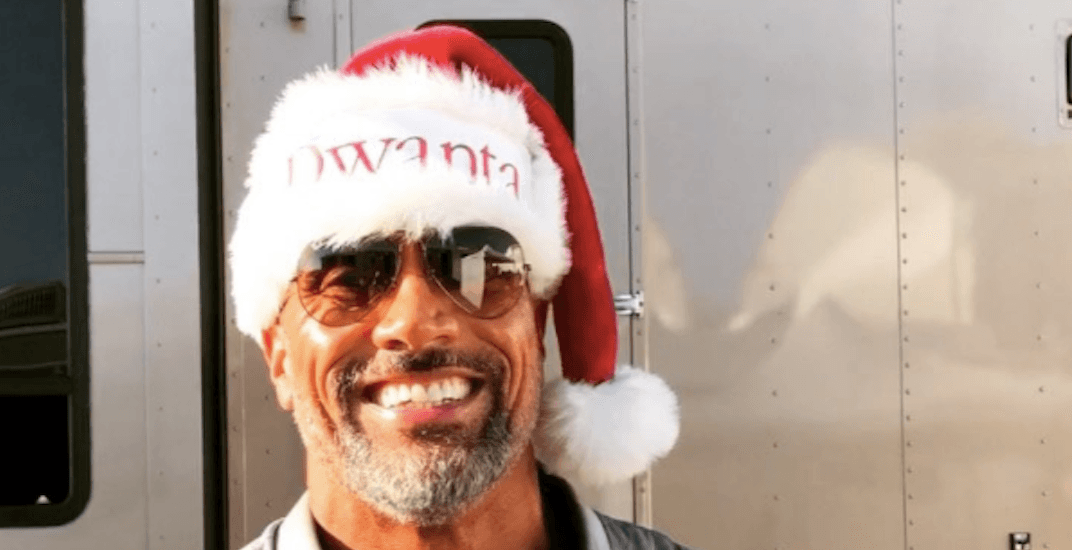 Dwayne ‘The Rock’ Johnson just can’t help but make people smile. And he continued to do that this week, as he welcomed three fans from the Make-A-Wish Foundation to his Vancouver movie set.

In a video posted to Instagram on Monday, The Rock – speaking from the Skyscraper film set and decked out in a Santa hat and blood-stained shirt – tells a 16-year-old girl from New Jersey named Emily, a 15-year-old girl from Spain named Maria, and a 19-year-old man from The Netherlands named Murat that he is “so excited about our big Make-A-Wish day tomorrow, Tuesday.”

“I cannot wait and I am honoured that I am the wish of these very special young adults and kids that are coming in, I cannot wait to meet you guys.”

After months of #DwantaClaus🎅🏾 planning, our big MAKE A WISH day has finally come. Tomorrow, Tues, Oct 31st, our #SkyscraperMovie set will welcome three VERY special kids and their families. As always, whenever special kids visit, I make sure my movie sets are like Willie Wonka’s Chocolate Factory. All love, all fun and all the sweets you can eat for FREE! All my teams are flying in to help make this special – @sevenbucksprod @sevenbucksds @garciacompanies and our awesome partners @makeawishamerica @makeawishintl as well as, @microsoft and @Xbox. And course, #DwantaClaus🎅🏾 will be waiting with open arms and a song to sing. But no tequila because everyone’s underage. 😂 So excited for tomorrow. Gonna be an amazing day that we’ve officially titled LIGHTS, CAMERA, LOVE.. IN ACTION. #MakeAWish #Emily #Maria #Murat #Dwanta🎅🏾

Then on Tuesday morning, he posted another video “on the way to the Skyscraper set,” reiterating once again how excited he was to meet the trio – “three very special people from Make-A-Wish.”

Dwanta Claus is comiiiing to town.. on my way to #SkyscraperMovie set and can’t wait to meet my special Make-A-Wish guests… Maria, Murat and Emily! We have an awesome day planned for you and your families.. #ICouldntSleepEither #SeeYouSoon #Dwanta🎅🏾

The A-list superstar has been in Vancouver the past few months on the set of his new movie Skyscraper.

The movie has been described as Die Hard, but set in China.

In the film, Johnson stars as a former FBI Hostage Rescue Team leader who assesses security for skyscrapers, but finds himself framed when a new building in China dubbed ‘the safest in the world’ is set ablaze.

Skyscraper, filming in Vancouver until November 17, is set for release in theatres in July 2018.