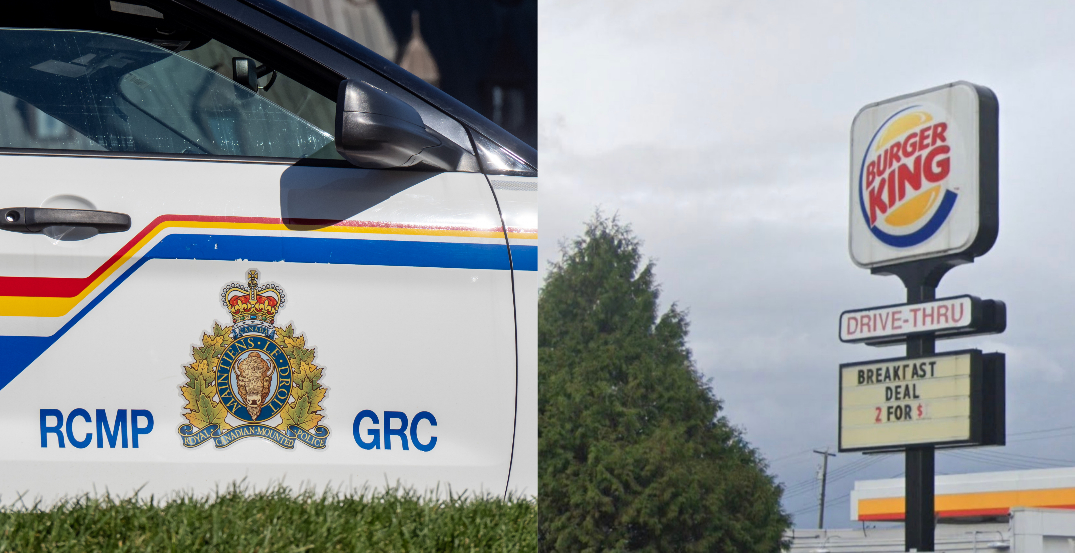 An RCMP officer based in BC got a small fine of $1,000 and three months of probation for driving drunk and passing out in a Burger King drive-thru.

The incident which took place “on or between” April 9 and April 10, 2020, involved Constable Blaise Picketts. He was at or near Maple Ridge, BC, at the time.

According to the contents of a Conduct Board Decision which was dated April 8, 2022, but published on July 20, 2022, Picketts was alleged to have breached the RCMP Code of Conduct in a variety of ways.

The decision document suggests that Picketts was actually off-duty at the time the incident occurred, but that he had his police dog in the vehicle with him at the time along with other police gear. The document states that the particulars of these allegations were not contested.

The kicker is that despite passing out drunk in an RCMP vehicle at a Burger King drive-thru, Picketts got to keep his job.

On the afternoon of April 9, Picketts drove to a liquor store to purchase alcohol. He then visited a couple of his coworkers in Langley and Surrey and “consumed several alcoholic beverages over the course of the afternoon and evening.”

“On April 10, 2020, at approximately 2:30 am, you were found asleep behind the wheel of [your police vehicle] at the Burger King drive-thru.”

The address of the Burger King was redacted, however, Picketts was found asleep with a credit card in his hand and the vehicle engine running. It was the staff at the restaurant who called 911 because they were concerned about Picketts’ safety.

The document states that police then arrested Picketts for his refusal to provide a breath sample and for impaired operation of a vehicle. He apparently bit the straw and turned his head away from the Approved Screening Device.

He then told the officers to “f*ck off” and said, “I’m not under arrest.”

When officers physically tried to arrest him, Picketts tensed his arms and body and was “acting in an assaultive manner in that, at one point, he lifted his knee quickly in the direction of Constable Wagner’s groin.”

He also grabbed the handcuffs that the officers were trying to restrain him with and injured one of the constables in the process. The document states that this was all caught on video. The police dog who was found in the car was unharmed.

“While on scene the officers noticed damage to the passenger side and rear bumper.”

According to the document, Picketts damaged his vehicle while crossing the Golden Ears Bridge in Maple Ridge, causing $7,000 in damage to the vehicle which Picketts reimbursed the RCMP for.

Hearing Officer Christine Sakiris states that Picketts used his police vehicle for personal reasons “while doing so damaged the vehicle and placed the safety of the public and your police service dog at risk.”

“Constable Picketts recognizes that his actions negatively affected the reputation of the RCMP, particularly as members of the general public witnessed the incident. He further acknowledges that his actions were discreditable and placed the safety of the public, his fellow police officers, and his police service dog at risk.”

The future of Picketts’ job

The hearing suggests that Picketts was remorseful for his actions and immediately saw treatment for his substance issues.

He also accepted full responsibility for his actions “and has made every effort to resolve this matter as quickly as possible.”

“He admitted to the allegations and acknowledged his misconduct at the earliest opportunity. In addition, he immediately sought treatment, and pled guilty to a criminal charge arising out of this incident,” said Sakiris.

The hearing also looked at his previous work and suggested that he proved himself to be reliable and proactive.

“He is well regarded and, in the last 10 years, consistently exceeded expectations.”

In the end, the hearing found that Picketts’ actions were not malicious.

There are some consequences for Picketts though.

He’ll have to pay a financial penalty of 30 days, and has to forfeit 15 days of annual leave. Picketts was hoping for a promotion but now will have to put in an additional three years of service to be eligible for the roles he was hoping to be promoted to. He also has to apologize in person to the other officers involved in the incident.

Picketts will no longer be able to have a police dog which the RCMP believes “will be profoundly felt by Constable Picketts.”

“Constable Picketts is being permitted to continue his career with the RCMP. It is expected that he will uphold the standards set by the Code of Conduct and the RCMP core values. Any future contravention of the Code of Conduct will be seriously reviewed by the appropriate conduct authority and could lead to his dismissal from the Force.”