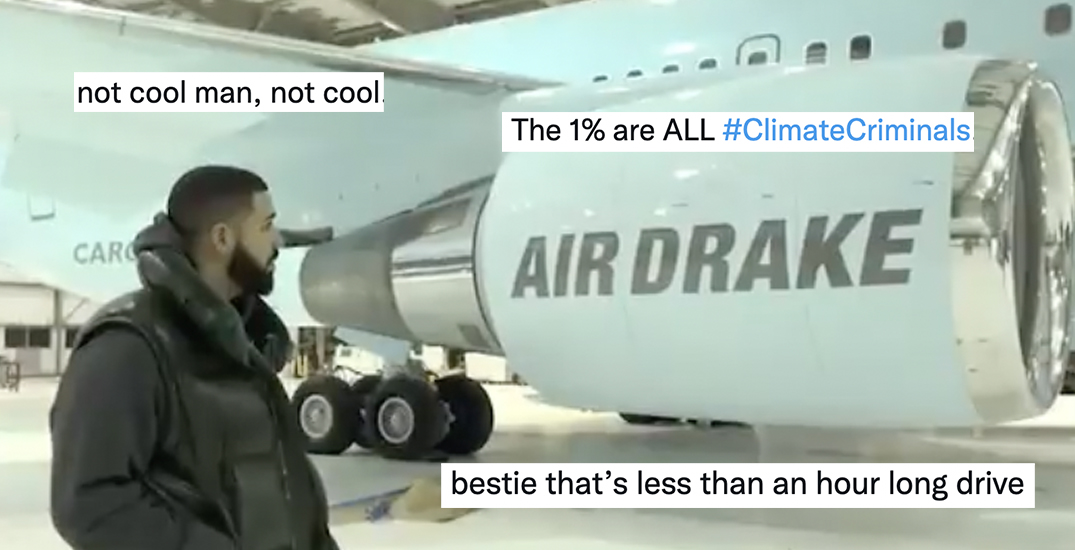 When it comes to climate change, the everyday person is urged to do what they can to reduce their carbon footprint, whether it’s using paper straws, opting for reusable grocery bags, or buying second-hand items.

However, after it was revealed that celebrities like Drake are taking their private jets for very short flights, creating incredibly high carbon dioxide (CO2) emissions, people (who aren’t rich enough to own private jets) are questioning why the onus is on them to stop climate change.

It would’ve taken about an hour to get there by car.

People were infuriated to also find out that this one flight emitted about four tons of C02 emissions.

For context, it takes one person about a year to create two tons of C02 emissions, and a typical passenger vehicle emits about 4.6 tons of CO2 per year.

“This is criminal,” was one user’s reaction on Twitter.

Drake just flew 14 minutes on his private jet and made 4 tons of CO2 emissions. That’s the same amount of emissions the average person makes in a year. It would have taken an hour to drive the same distance. This is criminal.

surely my stainless steel straw will offset whatever CO2 drake’s plane emits to fly one person for 12 minutes pic.twitter.com/xJ3iLHyqEK

Another is just fed up with having to use those flimsy paper straws.

in light of me being 26 now, i have officially made as much of a carbon footprint over the span of my life as drake does in a week with his private jet alone. but i’m supposed to use paper straws??

And this isn’t the first time the Canadian rapper has flown that route. Celebrity Jets recorded three other flights from Toronto to Hamilton spanning from June 28 to July 22.

In 2019, the jet even took victory laps around Toronto during the Raptors championship parade.

Unsurprisingly, Drake isn’t the only celebrity perpetrator. Kylie Jenner was also in hot water last week after she posted an Instagram photo of her and boyfriend Travis Scott flexing their private jets.

“You wanna take mine or yours?” the caption reads.

It didn’t take long for people to expose Jenner’s habit of taking flights as short as three minutes.

Ordinary non-billionaires are fed up with having to carry the weight of climate change on their shoulders, and many are labelling celebrities like Drake and Jenner as climate criminals.

Funny how no one’s talking about the fact that @Drake takes a private jet from TORONTO to HAMILTON.
The 1% are ALL #ClimateCriminals. #99vs1 #PeopleOverProfit #TaxTheRich

“What is even the point anymore?” another Twitter user questioned.

with their planes alone, Drake, Kylie Jenner, Kim Kardashian, basically every celebrity with a private jet each INDIVIDUALLY create more carbon emissions than the average person does in 9 YEARS

“Can you think about the future of our planet please?” another Twitter user pleaded to Drake.

hey @Drake, you’re pretty awesome & all, but damn… can you think about the future of our planet please? 🌎 private jet to Hamilton? more carbon footprint for this than most in one year… not cool man, not cool. #climatechange