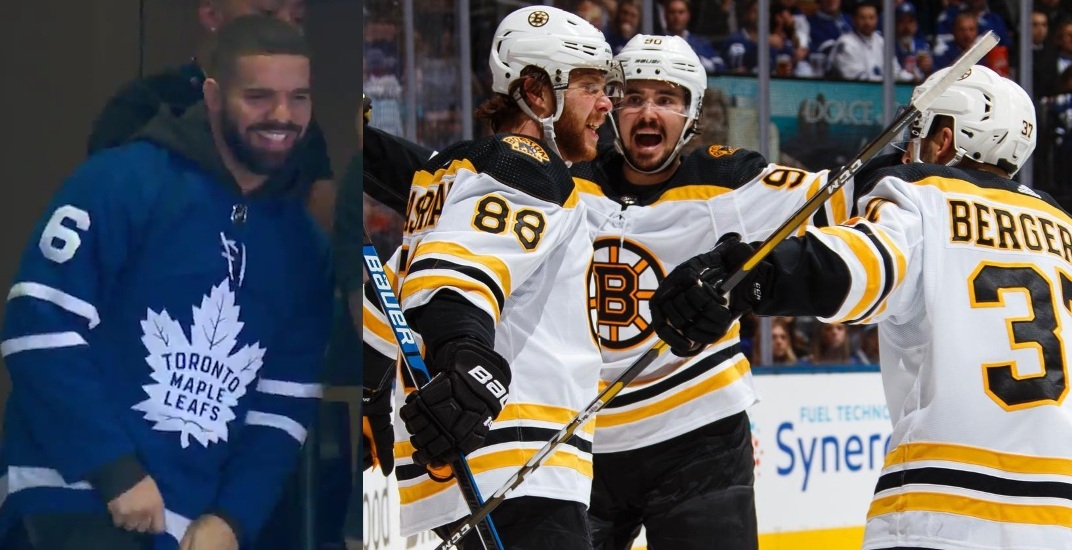 If the “Drake Curse” is real, the Toronto Maple Leafs are the latest victim.

Unfortunately, there’s also a lengthy track record of teams losing whenever Drake shows up to show his support.

It sounds funny, but the list is so long now it almost makes you wonder if there’s some substance to it.

The Leafs did their best to buck the curse – scoring two quick goals midway through the third period to get within a goal – but the comeback fell short and they lost 6-4 in Game 4 after the Bruins scored an empty netter in the dying seconds.

Trailing 5-2 in the third, the Leafs got some life back in the building when Auston Matthews scored his second goal of the game on a power play.

Travis Dermott’s goal 1:37 later made it 5-4 and the Leafs pressed for the equalizer over the final minutes before the Bruins’ Joakim Nordstrom scored on the empty net.

Despite letting in five goals, Frederik Andersen turned in another strong performance. He made some key saves, including a first period glove stop that prevented the Bruins from an early 3-0 lead.

Andersen comes up large with a glove save to keep the game close. #LeafsForever pic.twitter.com/RljBGbiuWA

Shortly after, Toronto scored to get within a goal.

The Leafs had the game tied briefly in the second period after a Matthews wrist shot snuck under Tuukka Rask’s left arm, but a pair of David Pastrnak goals put the Bruins back on top for good.

With the series tied up at 2-2, it’s become a best-of-three as the series shifts back to Boston (and away from Drake) for Game 5.