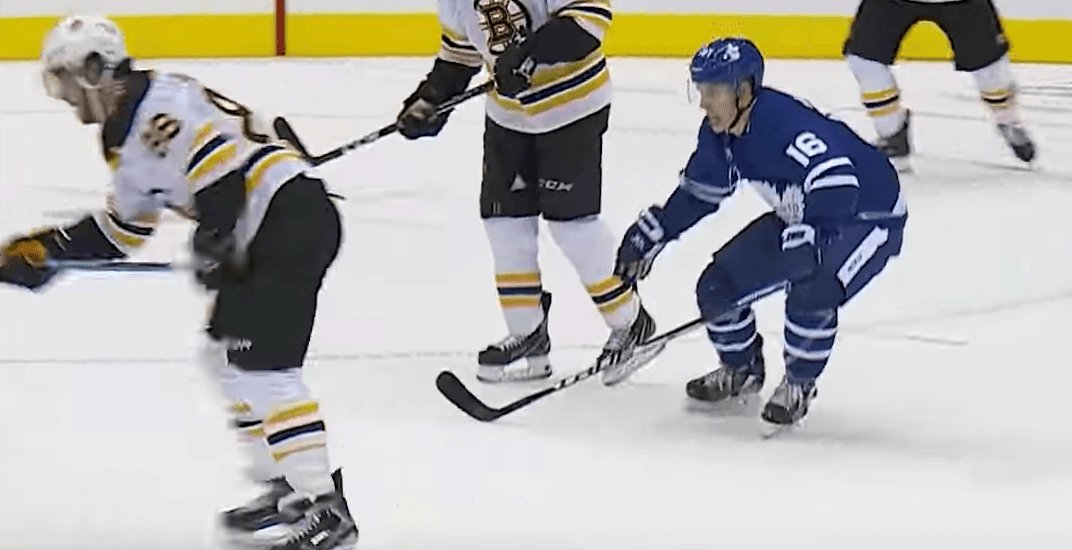 As hockey has become increasingly focused on skill over the past decade or so, it’s often bought up by detractors that there’s a lack of good old-fashioned grit involved in the modern NHL.

But it’s hard to say that about Mitch Marner’s attitude in the closing seconds of the Toronto Maple Leafs’ Game 3 victory on Monday night.

After leading the team with two goals in Game 1, it was a pair of crucial shot blocks on Boston’s David Pastrnak as time expired that earned the 21-year old winger the praise of his teammates after Game 3.

Fourth-line forward Trevor Moore, who scored his first career playoff goal earlier in the night, was ecstatic at the play.

Trevor Moore said even he was fired up by Mitch Marner’s shot blocks: “I didn’t know it was possible to block two shots like that and be okay.”

Marner, a 94-point player in his third year in the league, registered 43 shot-blocks at even strength during the regular season, a career high. But none were bigger than the two at the end of Monday night’s contest, giving the Leafs a little extra security as they closed out the win.

Of course, there’s no way of knowing what could’ve happened had Marner simply given David Pastrnak an opportunity to shoot openly. The puck could’ve sailed wide, been saved, or even hit Mitch in the face. But the Toronto winger wasn’t concerned about any potential injury on the play.

Marner on not shielding his face on Pastrnak's second shot last night: "There’s dentists for a reason." #Leafs

It was just last week where another prominent NHLer — San Jose’s Joe Pavelski — took a puck directly in the face.

Pavelski just scored a goal off his face 😳 pic.twitter.com/ipa37ZZWrQ

Auston Matthews, who broke a six-game playoff scoring drought with a power play marker in the second period, said the play was a rallying moment for their team.

Auston Matthews on Mitch Marner's final shot blocks: "It doesn’t matter who you are, when you see a guy like him sacrifice their body, it just motivates everyone on the bench and with the time winding down, that was huge."

Listed at just 175 pounds, Marner is the second-lightest player on the Leafs’ roster, after Tyler Ennis. Teammate Jake Muzzin made sure he got in a quick lift of Marner after the final whistle went.

Praise for the play came from all corners of the internet, including Leafs fans and media.

Mitch Marner blocks a shot to preserve the win. The kid is special. #Leafs

Mitch Marner is able to block shots like that because his bones aren’t fully formed yet.

Head coach Mike Babcock was full of praise for Marner, who also picked up an assist earlier in the night.

“Good for him, and good for us.”
Mike Babcock on Mitch Marner’s shot blocking to close out the game: pic.twitter.com/vw8blf5SMA

Meanwhile, Leafs beat writer James Mirtle of The Athletic attempted to downplay the surprise that it was a star forward like Marner throwing his body on the line.

I'm surprised anyone is surprised Marner blocked those two shots at the end. Kid has done everything all season. Played 23:12 tonight, second on team to only Rielly!

But the blocks were as symbolic of Marner’s growth as an all-around player as they were of Toronto’s defensive play in the series in containing Boston’s stars.

After leading the Bruins with 20 points in 12 games last year (including 13 in seven games against Toronto,) Pastrnak now has just one assist through three games. While Brad Marchand does have three points so far in the series, no other Bruin has more than two. Just five separate Bruins players have been able to score this series, while seven different Leafs have.

The Leafs haven’t dominated play by any means, scoring eight goals to the Bruins’ seven, as little plays like Marner’s could add up to being the difference between winning or losing the series.