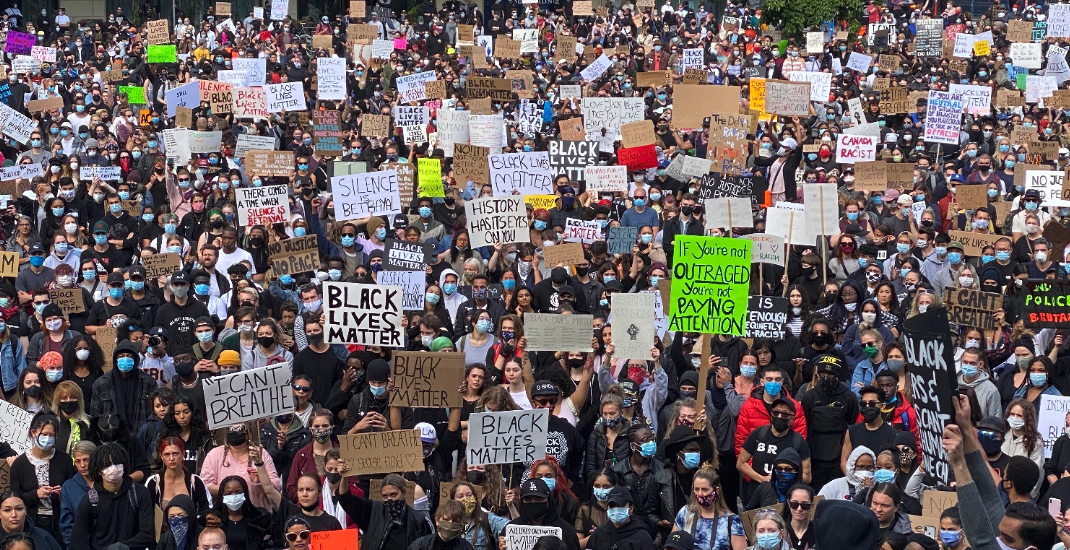 Premier John Horgan addressed the gathering of over 50 people at anti-racism protests held in solidarity with George Floyd in Vancouver over the weekend.

In his weekly media address, Horgan was asked to speak to BC’s order around mass gatherings and what the difference is between a protest with more than 50 people compared to a wedding with the same number of attendees.

“With respect to protests versus official gatherings … if people congregate to have their voices heard in a random way … it’s not a scheduled event as a wedding would be or as a drive-in theatre would be or any other areas where public health orders are in place,” said Horgan.

“And free association and the ability to speak about issues that matter in the public square is a fundamental right.”

Horgan said he has talked to Provincial Health Officer Dr. Bonnie Henry and Health Minister Adrian Dix about the protests and understands it can be “a challenge.”

“I absolutely understand how people would go, ‘What’s the difference?’ But there’s a big difference,” he said.

“We’re saying to people let’s have smaller events if you’re celebrating a matrimony… Try and do it under 50 people; try and exercise responsibility. I’m saying the same thing to protesters. Please do the right thing. Be responsible for yourself and more importantly the people around you.”

“But also, please abide by the directions that Dr. Henry has put in place. Try to stay a good distance away from your fellow protesters. Wear a mask if at all possible. If you’re going to be chanting, make sure you’re going to be covering yourself up so you’re not potentially infecting other people.”

Dr. Henry has also publicly addressed the large gatherings at protests. Earlier this week, Henry advised individuals who attended Sunday’s protest at the Vancouver Art Gallery to monitor themselves for symptoms of COVID-19 over the next two weeks.

In a written statement today, both Henry and Dix encouraged protesters to “consider alternative ways to peacefully demonstrate, as we have seen elsewhere.”

“Gather in smaller numbers in multiple locations, maintain a safe physical distance from those around you, and use a non-medical cloth mask for the brief periods when in closer contact to others,” said the health officials.

Horgan says he ultimately does “understand the motivation and the desire for people to have their voices heard at this most extraordinary time in our world history.”