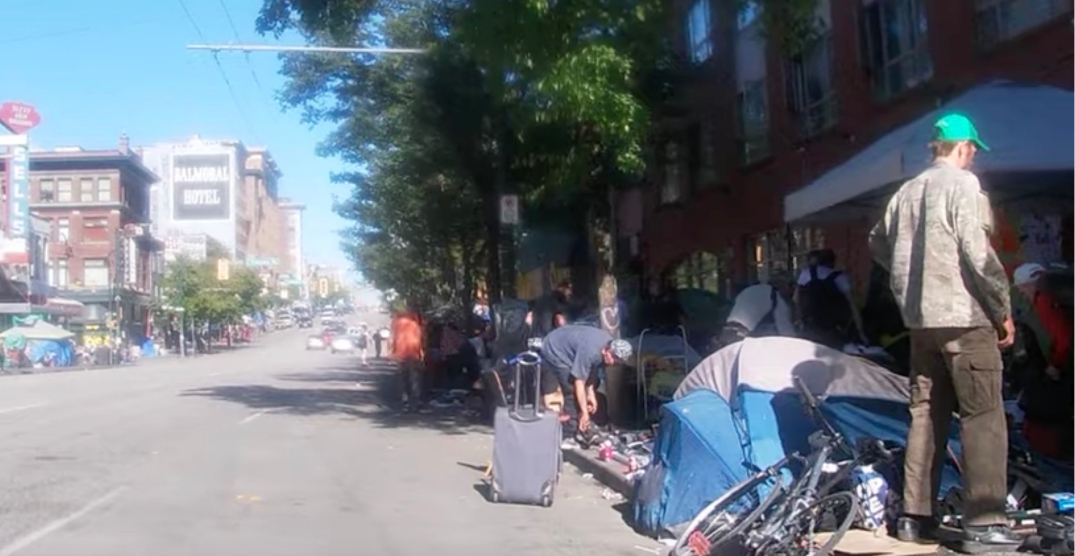 Someone who lives in the Downtown Eastside shared a video highlighting how difficult it is for them to get home.

The Downtown Eastside is a divisive point of conversation in Vancouver. There are those who are frustrated by how the situation has been handled when it comes to homelessness,  mental health, and the opioid crisis. There are others who think those who fall in the first camp lack compassion and understanding for those who are struggling.

While the two sides will likely be engaged in a never-ending philosophical battle, someone who lives in the Downtown Eastside recently uploaded a video to YouTube that follows her on a path home that goes through the hardest-hit areas of the neighbourhood.

Debbie Hellion and the Apocalypse, the person behind the account, is frustrated, to say the least.

The video is titled “Shouldn’t be Dangerous Just Trying to Get Home Through the DTES Sh*tShow.”

The title also says, “Yo Mayor Stewie Fix it.”

The video shows a woman moving towards Hastings Street via Carrall Street. The video comments suggest she may be confined to a wheelchair or a mobility assistance device.

As she approaches Hastings Street, the crowds of people grow. She makes a right on Hastings Street and is forced to walk on the road due to the entirety of the sidewalk being covered by people with their tents and other belongings.

She attempts to finally make her way onto the sidewalk when she reaches her apartment and struggles to get to the door. Obscenities are thrown around before she finally gets to the door.

We hear her say, that it “shouldn’t be this hard to get to your f*cking apartment!”

The sidewalks of E.Hastings near Carroll are covered in tents and structures.
I predict it’s only a matter of time until these tents pop up on the actual road… Why no coverage of this daily in the media? @GlobalBC @CTVVancouver @CTVVancouver @CityNewsVAN @DailyHiveVan #VanPoli

The user has received a lot of support from her followers on YouTube.