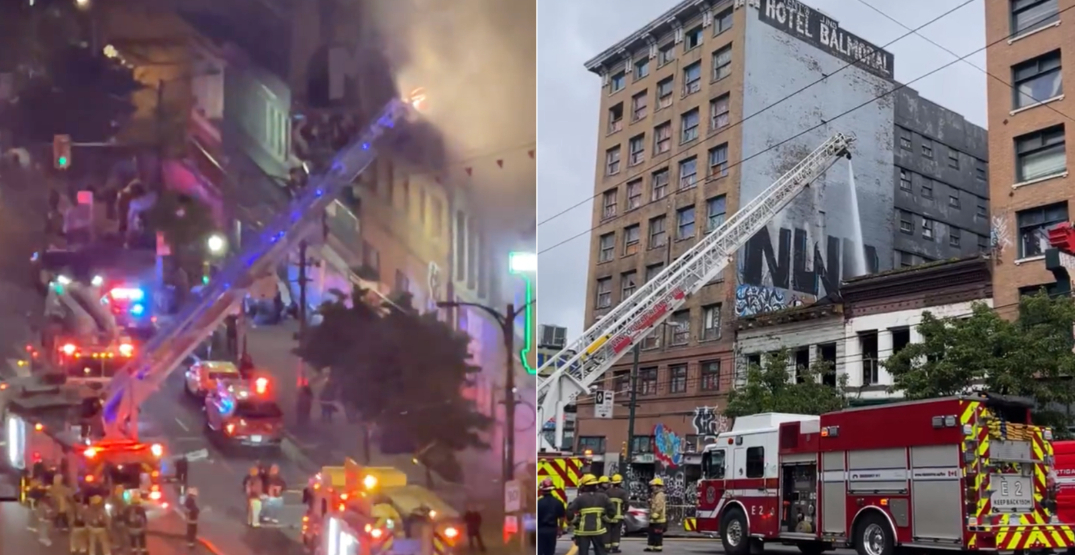 Smoke engulfed a part of the Downtown Eastside Wednesday night after a fire broke out at Vancouver’s Street Church. A community member explains losing this space would be significant loss to the most vulnerable residents.

Fire crews responded to reports of smoke around 9 pm on Wednesday. About 50 firefighters were on scene near Main and East Hastings streets, where crews upgraded their response to a second alarm, Matthew Trudeau, public information officer for Vancouver Fire and Rescue Services, told Daily Hive.

“Crews were backed out of the building from some of the fire and flames. From there it was a defensive fire and we are still operating on scene to distinguish the last remaining hotspots and residual smoke,” Trudeau explained.

There is extensive damage to the Street Church Trudeau says, adding “the roof is no longer there for the church.”

City engineering will determine the next steps for the church and whether or not the building will be demolished.

Trudeau was not able to confirm if anyone was in the church at the time.

An adjacent building was impacted and over 75 people living in the single-room occupancy hotels (SRO) were evacuated as a precaution.

Trudeau says residents displaced were looked after by ESS.

One firefighter was injured, but the fire department does not have details about their condition.

Since crews were able to arrive at the scene quickly and isolated the fire to the two buildings as much as possible, Trudeau says, there was no impact to other properties.

Sarah Blyth, the executive director at the overdose prevention society, lives in the Downtown Eastside and witnessed the fire while walking with her dog.

Crazy – Unbelievable and hard to breathe down here can imagine what the firefighters feel like. Fire at main snd Hastings @ashtrey5 #vanpoli pic.twitter.com/ZAnDPhpdhZ

The Street Church has been open since 1993. For years this community church has provided hot meals, a place to sleep, and handed out essentials to those most vulnerable in this neighbourhood.

“They’re on one of the most challenging blocks in the community. So it’s just a tough… sad loss for everyone. We’re in a time where you need people like that, that understand and are willing to come down and really put some effort into helping people and be in the community every day,” Blyth told Daily Hive.

“People like the Street Church, are there on an everyday basis, seeing what’s happening and understanding the complexity of the issues that people are facing, in one of the hardest times in Canadian history with some of the most vulnerable people.”

Blyth says the meaningful work the church does for the community proves they are frontline, supporting those who are in absolute crisis.

Losing this space would be a significant hit, so she says she hopes the Street Church is able to rebuild and receive the support to continue to do the work it has done.

This year, fire crews have responded to a number of significant fires in this area. In April, a single-room-occupancy hotel in Vancouver’s Gastown neighbourhood was demolished following a four-alarm fire and just last month, a Value Village store was destroyed after a ferocious fire.

“It’s concerning that there are so many fires… For one because people die from fires and it’s scary for anyone who lives down here,” Blyth said. “You start to think about what’s your fire evacuation plan? Which is terrible to worry about… A lot of these buildings are old and in total disrepair, and vulnerable people are living in them. A lot of them have mobility issues.”

No. 2 fire hall, which was closest to the fire is one of the busiest departments in the area, Trudeau says.

“We are averaging almost 10 fires a day with damage. We do have the busiest of one of the busiest fire halls operating here in the Downtown Eastside because of the need down here and some of the population and buildings down here make it pretty challenging. So our crews are incredibly busy,” he explained.

However, he says the fires in recent months are separate and “just happened at a higher frequency right now.”

“We are a very busy department as a whole,” he said.

Either way, Blyth says the uptick in fires recently is “surreal and depressing.”

She says it’s felt like the community is facing “just one crisis after another.”

“I just feel bad for people who are going through an already tough situation to just have it all compounded even more. What more could go wrong for this community?” Blyth told Daily Hive.

She adds, particularly Wednesday night, many unhoused people that reside on East Hastings where the fire took place may have been forced to stay in the area because, “Unfortunately the people that are on that block, don’t really have too many places to go.”

“I was thinking like, ‘Oh my God, all these people outside have to stay.’ I get to go into my apartment and shut all the windows. And I have some issues with my lungs these days, but I just can’t imagine all of the people that are homeless, it has to just sit in this smoke pit of hell,” she said.

“For the people on the block there, it’s just a lot of vulnerable people. A lot of them have… mobility issues and can’t get too far one way or another. So they’d have a hard time getting out of there and leaving some of their personal possessions behind which would just be everything that they have… So I imagine that a lot of people just stayed around and just dealt with the smoke.”

Because of the fire, Blyth says the Overdose Prevention Society is without power Thursday so it will only be able to open its outdoor site for now.

“We don’t have power for overdose prevention sites this morning. I don’t know how long that’ll be going on for but there’s just so many different things that trickled out from the fire in a vulnerable community like this.”

Trudeau was unable to confirm if power has impacted the area surrounding the fire but added gas has been shut off to specific buildings in the area.

Blyth is pleading politicians to assist on the front lines.

“You can start just by helping one person get housing.”

Fire crews are not yet about to provide details about the ongoing investigation and have not confirmed if the incident is suspicious.

For the time being, East Hastings between Main and Columbia is closed.