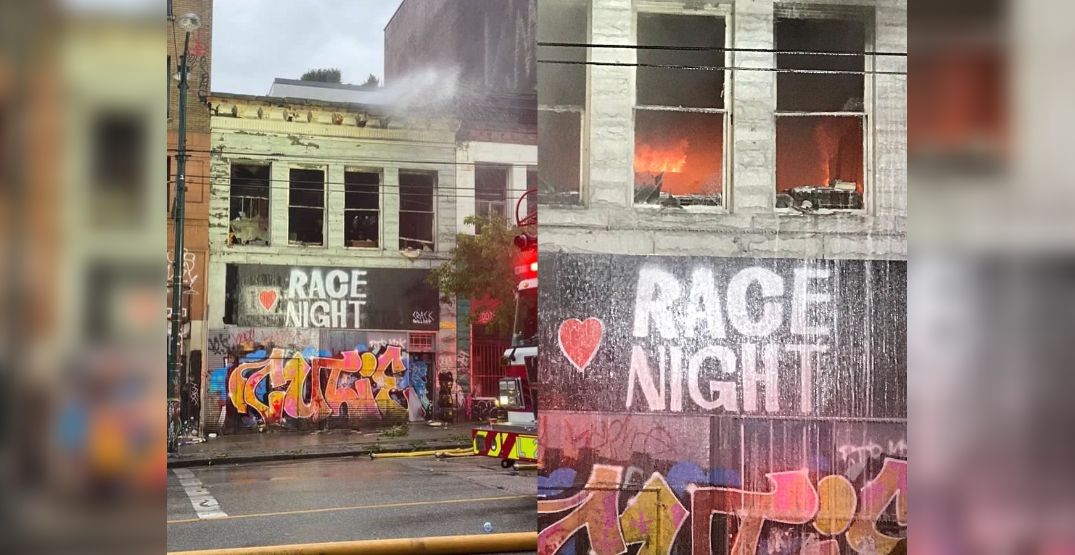 The devastating fire that ripped through a pair of buildings on Vancouver’s Downtown Eastside this week included a studio for artists. The gallery says the art community has now been left in a “precarious position.”

Crack Gallery is one of the neighbours of Street Church — the building that was left with extensive damage after a fire broke out Wednesday night. An adjoining building was impacted and over 75 people living in the single-room occupancy hotels (SRO) were evacuated as a precaution.

“The building next door to 165 East Hastings caught fire which eventually spread leaving both buildings damaged beyond repair,” the gallery said in an Instagram post. “This left many Downtown Eastside community members, artists, residents, and businesses in a tough spot.”

The Crack Gallery explained that many artists’ belongings in this adjacent space were uninsured.

“This is a terrible loss for many of us since this was a great space for shows and community based initiatives,” the gallery added. “There are so many others who have been impacted and have lost so many things invaluable including the building itself.”

One artist, for example, lost his entire body of work, which was set to be used for an upcoming show.

A friend and roommate of the artist posted to Instagram that he is a “truly inspired painter.”

According to the social media user, the artist hasn’t been able to enter the building to assess damages, but it’s assumed all his work has been destroyed.

“The loss of this space will be felt by many and is a devastating blow to accessible art in this increasingly inaccessible city,” the post reads. “It’s a true shame that so many great works from all the artists in the building won’t be seen and enjoyed by the public. Especially since Jack had nearly finished preparing for his next show.”

Another artist lost their custom-built furniture and costly power tools and materials.

“This will impact the art community of the DTES and leave artists in a precarious position moving forward since it is rare to find affordable spaces solely dedicated to creating in the city of Vancouver.”

Crack Gallery has set up a GoFundMe to raise funds for those impacted by the fire at 165 E Hastings.

“The amount we receive will be divided up between those who lost their belongings in the building which can go towards whatever they choose,” the GoFundMe reads.

The fundraiser that was set up Thursday has raised over $7,000 as of Friday morning.

Community members spreading the message of the fundraiser have also expressed sadness for the believed Street Church, which has played a valuable role in the community. The church provided hot meals, a place to sleep, and handed out essentials to those most vulnerable in this neighbourhood.

Fire crews have not confirmed if the incident is suspicious.