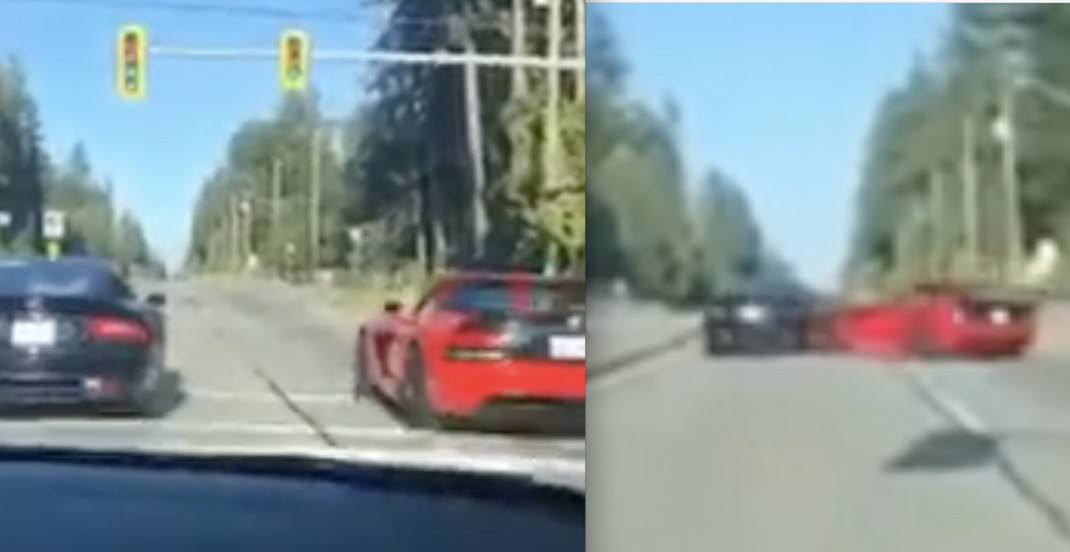 A pair of cars that appear to be racing along Highway 10 in Surrey ended up in what could have been a serious collision.

A video sent to Daily Hive shows a black and red Dodge Vipers driving through an intersection. The red Viper loses control and swerves into the black vehicle sending it spinning to the side of the road. The red car then appears to drive off.

Warning, the video contains explicit language that may be disturbing to some readers.

According to Cpl. Elenore Sturko with the Surrey RCMP, the collision was reported to police around 7 pm on July 28. The incident allegedly occurred along 132 Street and Highway 10 in Surrey.

Surrey RCMP was unable to confirm if the vehicles were speeding or racing. “We need to find out more,” Sturko said, adding that the video has been passed on to the detachment’s traffic unit for further review.

“We encourage people who witness these incidents to contact us so we can investigate further,” said Sturko. “This can be helpful for public safety.”

The BC Government is taking action to crack down on speeders and reckless drivers. On Monday, five automated speed cameras began operation in Vancouver, Burnaby, Surrey, and Pitt Meadows.

These cameras are the first of 35 that are expected to be operational by Spring 2020.

Drivers caught stunting or street racing in BC risk having their vehicle seized by police.