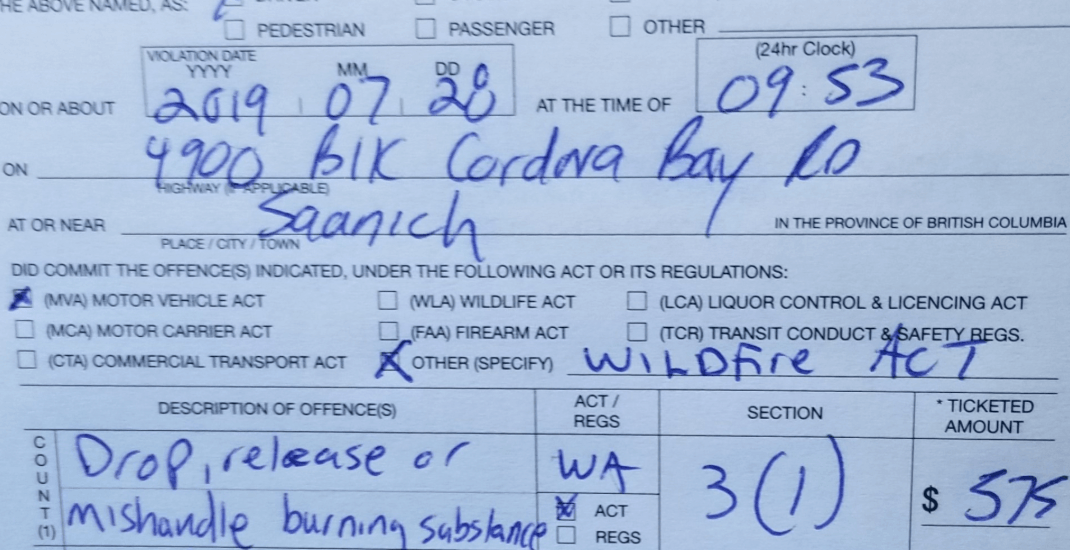 A BC driver received a hefty fine after allegedly throwing a lit joint out of their car window.

According to the Saanich PD Traffic unit (SPD), the driver was ticketed $937 for multiple infractions on Monday morning — including $575 for tossing the burning joint, $253 for speeding in a playground zone, and $109 for failing to change their address on their identification.

“To make it worse they were smoking a marijuana cigarette while driving,” noted SPD.

Well you can’t say we didn’t warn you.SPD posted on both their FB and Twitter accounts about dropping lit cigarettes out of your car windows. This driver did not listen 🙄To make it worse they were smoking a marijuana cigarette while driving.
Bad start to Monday! #yyjtraffic pic.twitter.com/LOqhmLLECh

SPD said “this driver did not listen” to their previous warning issued days before, instructing motorists that throwing lit cigarettes out of their car windows would land them with fines enforced by both the BC Wildfire Act and the Motor Vehicle Act.

Do we really need to keep reminding people?Still getting calls about drivers throwing cigarettes out their car windows. SPD will be enforcing both the BC Wildfire Act (575$ fine) + Motor Vehicle Act (81$ fine) for anyone seen making this very poor choice #yyjtraffic pic.twitter.com/7drrkhcqx6