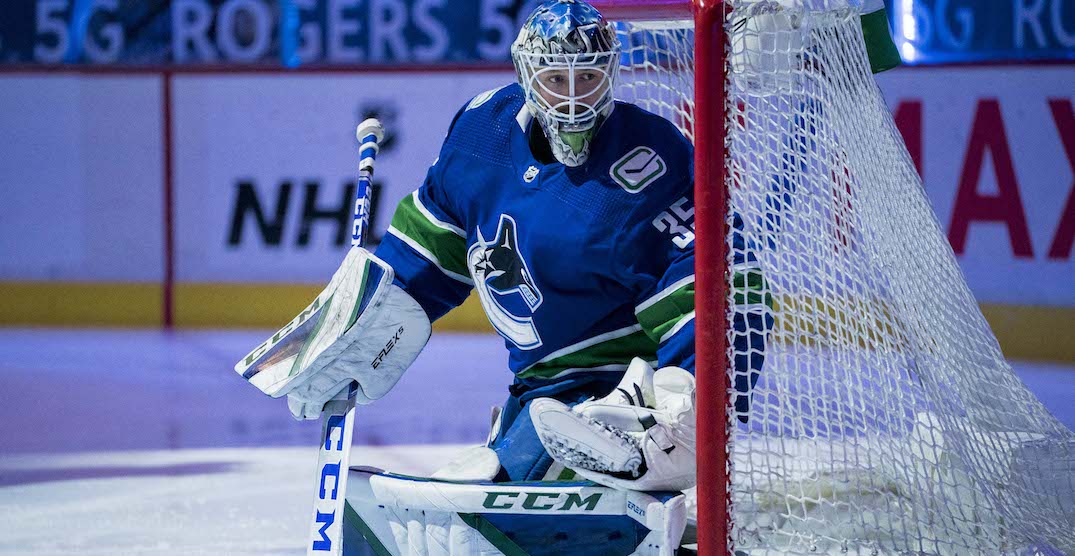 GM Jim Benning has taken a lot of heat for how the Vancouver Canucks have performed this season.

The Canucks have had an awful first two months, posting a 9-14-2 record, good for the fifth-worst winning percentage (.400) in the NHL. They’re not as good as last season, and a big reason why is because of Benning’s mismanagement of the salary cap over the years.

And while he’s been rightly criticized for many of his offseason moves — re-signing Jake Virtanen while letting Tyler Toffoli walk chief among them — he did make at least one right call.

The Canucks were faced with a dilemma with regards to Jacob Markstrom and Thatcher Demko. Markstrom had just been named team MVP for a second consecutive season, and was widely viewed as one of the top goalies in the NHL. Demko, however, had just come off a sensational run of games in the playoffs.

The sample size favoured Markstrom, but age favoured Demko, who is six years younger. With the Seattle expansion draft looming, keeping both goaltenders was not possible, as Markstrom not only needed a raise, he wanted a no-movement clause as well.

So Markstrom signed a six-year, $36 million contract with the Calgary Flames, with a full no-movement clause, and the Canucks hitched their wagon to Demko.

It was a risk, but so far, it looks like the right decision.

To start, the Canucks have taken a step back, and likely are at least a couple years away from being able to truly be considered a Stanley Cup contender. By that time, Markstrom will be 33, and could see a drop in his performance.

Demko had only ever started 34 games heading into this season, so he was unproven. The team signed Braden Holtby in free agency, with the very real possibility that the former Stanley Cup winner could take over the starter’s job.

Instead, the opposite has happened.

The jury’s still out on Holtby and his $4 million cap hit, but Demko appears to have solidified a spot as the Canucks’ No. 1 goalie. The San Diego native has been getting better as the season has gone on, and his numbers are reflecting that. He has started seven of the team’s last nine games, posting a .921 save percentage in that time, including his first-career regular season shutout on Monday night in Winnipeg.

“His game is growing,” head coach Travis Green said after Monday’s win in Winnipeg. “I don’t think he had the best start to the season, but he’s worked hard on his game. I think the team’s playing better in front of him and he’s given us some real solid goaltending here. It’s good to see.”

Demko’s save percentage has climbed back up to .907, which is only 20th out of 36 goalies with at least 10 starts this season, but that doesn’t tell the whole story. Using Evolving-Hockey’s goals-saved above expected metric, Demko ranks fifth among goalies with 10+ games, posting a 3.73 GSAx.

And certainly that makes sense, given how bad the Canucks were defensively early in the season.

The Canucks gave up a whopping 35.7 shots per game in their first 15 games, but just 27.9 in the 10 games since. It’s hard to post impressive numbers, at least by the traditional metrics, when you’re facing that shot volume coupled with the difficulty of the chances being leaked.

But while his goals-against average and save percentage dropped, his confidence didn’t, according to his head coach.

“He’s been fine mentally here. He knows he’s played well,” said Green. “I think it’s different when you don’t play well and the team loses when you’re in net. Obviously our goaltenders are very competitive and they want to win.”

“He’s been working hard with [goaltending coach Ian Clark], not just on his game but on the mental part. He’s been in a good place, even though we haven’t won as many games as we’d like to, or he’d like to.”

Demko helped Vancouver win on Monday but will get a rest tonight, on the second half of back-to-back nights. But looking forward, Demko should get an opportunity for another run of games.

The Canucks will return home to Vancouver after tonight’s game for a difficult five-game homestand, playing the Toronto Maple Leafs and Montreal Canadiens twice each, and the Edmonton Oilers once. Demko could get all five of those games, and the Canucks likely need him to be at the top of his game if they want to win them.

None of this is to suggest that Markstrom has been poor in Calgary — he has a .909 save percentage in 15 starts, and is 18th in the goals-saved above expected metric (-2.11) among goalies with 10+ games. But at worst, the two goalies have been comparable this season, and when you take into account Demko’s age and contract status, it was the right call to keep him.